Heme is a coordination complex of iron and porphyrin. It is a required cofactor in enzymes for a variety of biological processes. In hemoglobin and myoglobin, heme is necessary for oxygen transport. For enzymes involved in the electron transport chain and photosystems, heme is essential for electron transport. There are many other examples of biological enzymes that require heme, including peroxidases, catalases, and reductases, which are involved in oxygen metabolism.

The production of heme occurs through a multi-step biosynthetic pathway. Heme is produced from Succinyl-CoA and glycine.1 Then a series of steps assembles these amino acids into a heme. Figure 1 below shows this heme biosynthesis pathway. 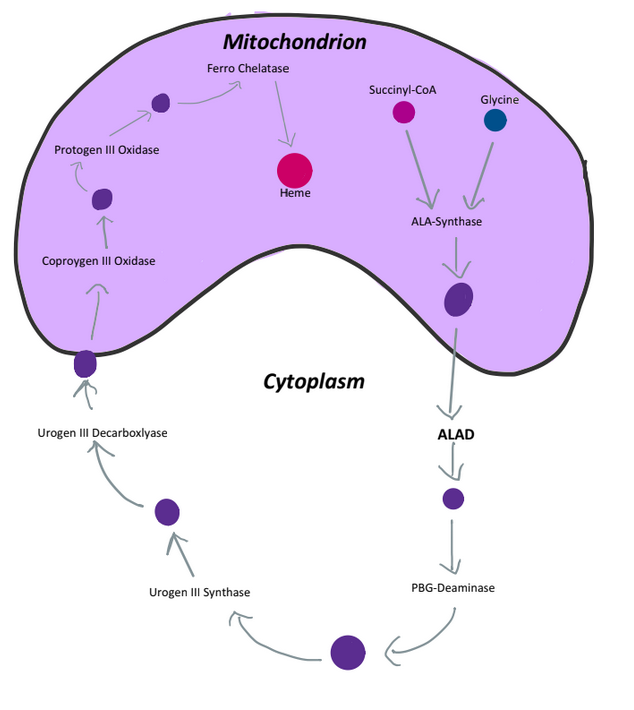 Fig. 1: The biosynthesis pathway that produces heme from succinyl-CoA and glycine. Hemes are necessary for several purposes in the human body, such as oxygen transport, oxygen storage and electron transport. Figure adapted from Ajioka, 2006.

In this biosynthesis, one of the steps produces porphobilinogen from 5-aminolevulinic acid. This step occurs in the cytoplasm of a cell. A zinc metalloenzyme, ALAD catalyzes this reaction. This enzyme is essential for heme production, as it has the highest activity of all the steps in the process of heme biosynthesis,2 and therefore controls the rate at which hemes can be assembled. Since ALAD is vital to heme biosynthesis, having ALAD be inhibited or deactivated would mean systems that rely on hemes, such as hemoglobin or myoglobin, would fail. One of the metals that deactivates ALAD is Pb2+. When Pb2+ is in the human body, it will bind to ALAD instead of Zn2+, and because the properties of Pb2+ differ from Zn2+ properties, ALAD will not be able to catalyze the reaction.3 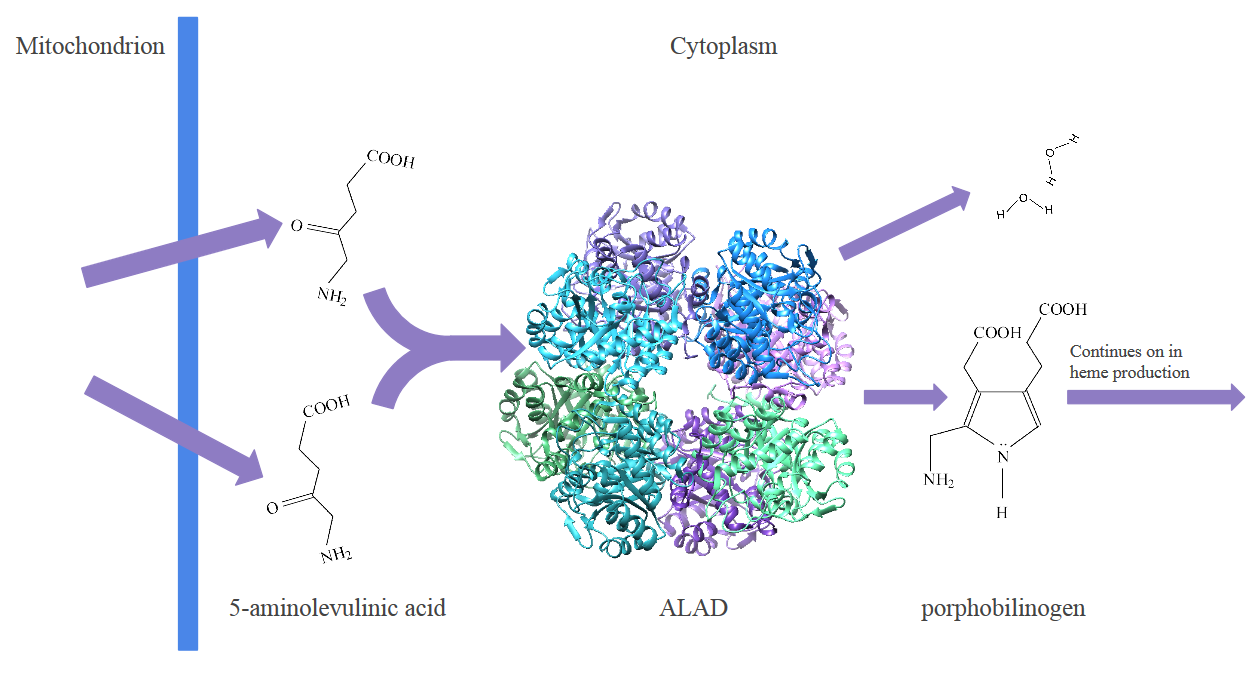 Fig. 2: The process of heme biosynthesis happens because of a series of steps assembles the heme. The enzyme ALAD catalyzes a reaction that takes 2 molecules of 5-aminolevulinic acid (ALA) and produces 2 water molecules and 1 molecule of porphobilinogen (PBG). The porphobilinogen will continue to be transformed into a heme through a process carried out by other enzymes.

ALAD is a homomultimeric complex made up of eight identical protein subunits. Each protein subunit has a Zn2+ active site which facilitates the catalysis of 5-aminolevulinic acid (ALA) to porphobilinogen. Interest in ALAD also stems from the fact that it is the first common step in porphyrin biosynthesis,1 as well as the face that it facilitates an asymmetric addition of the two ALA molecules.

At the active site, Zn2+ is bound to cysteine 122, 124, and 132 in each subunit. This monomer acts as a tridentate chelator.3 A chelator is pre-arranged for binding and in this case, makes Zn2+ to bind more favorably than if there was not a chelator present.

The overall structure has a tetrahedron shape, with the three cysteines positioned on three of the four positions of a tetrahedron. Having three positions from the tetrahedron occupied by cysteines leaves one coordination site in which Zn2+ can bind to a substrate.

There are more metals in the human body than just Zn. The chelator could bind to a number of different metals, like Ca, K, Na, Mg, Cu, or Fe, since they are all found in great abundance in the body. However, if it bound to those metals instead of Zn, it would perform the same way, making it harder or even impossible to assemble hemes. There are several factors that contribute to Zn being selected as the metal center, including its ionic radius, Hard and Soft Acid Base Theory (HSAB), and the geometric preferences of certain metals.

Size is one factor that helps ALAD select Zn2+ as its metal center. Metals closer to the left of the periodic table have larger ionic radii. This is because more protons and electrons in an atom mean that the attractive force between them is stronger. Therefore, as you go from left to right across the periodic table, the ionic radius decreases. Metals like Ca and K have larger ionic radii than Zn, so it may be more difficult and less favorable for ALAD to bind to these metals, since they are bulkier.

Hard and Soft Acid Base Theory is another reason that ALAD selects Zn2+over other metals. This theory says that hard acids and hard bases are attracted to each other, and vice versa. In ALAD, the acid is the metal, and the base is the atoms from the ligand. The classification of hard and soft acids and bases comes from there charge-to-radius ratio. There is not a well-defined line that separates hard and soft acids or bases, so some are classified as intermediate, and can interact with either hard or soft acids or bases.

The metal center binds to three sulfurs which come from cysteine ligands. The sulfurs that bond to the metal are considered soft acids. This is because they have a low charge-to-radius ratio. This means that if a metal is softer, it will bind more preferentially with the ligand. As a general trend, as you travel across and down the periodic table, the softer an acid or base becomes.

Since Na, Mg, Cu2+, Fe2+, Fe3+, and Zn2+ still have the possibility of binding to the ligand, based on their size and abundance in the human body, we now have to classify them based on their charge-to-radius ratio. Of the metals listed Ca, K, Na, Mg, and Fe3+ are all classified as hard acids. The remaining metals, Cu1+, Cu2+, Fe2+ and Zn2+ are all intermediate acids, meaning they could bind to either hard or soft bases. Although these metals are not a perfect fit for the ligand, they are still compatible, and will be able to bind.

With Cu1+ and Zn2+ both fitting all other categories of preference, the last thing that needs to be considered is the Zeff of the atom. The Zeff is a measure of how much an electron can penetrate a nucleus of an atom. This means that a higher Zeff will have a stronger attraction. To calculate Zeff the ionic radius and number of electrons are taken into account. Since Zn2+ has a larger Zeff than Cu1+, the Zn2+ will be have a stronger attraction to the ligand than Cu1+.

It is important to note that larger metals, like Pb, may be even Zn2+ and make a good fit for the chelator. However, these metals are not usually biologically available. If ingested, the metals then become biologically available and can replace the Zn2+ and inhibit ALAD. This inhibition does not occur in healthy individuals.

Table 1: Summary of Metal Selectivity. Zn2+. Highlighted in purple, Zn2+ is the only metal that fits all the categories for metal selectivity in ALAD, making it the metal center for this enzyme.

The geometric preference of Zn2+ plays an important role in the selectivity of it as a metal center, it also contributes to other properties that help the enzyme execute its function. The geometry of Zn2+ helps explain its stability as well as the catalytic cycle. Geometry is ultimately based on d-electrons.

For atoms with d-electron counts between d4 and d7 electrons, there is a chance that the geometry of the metal will influence where electrons fill. This is referred to as a metal having a high or low spin. Since Zn2+ has 10 d-electrons, there will not be any influence on the spin of the molecule.

The stabilization of the metal site is based on the geometry, and how ligands interact with the geometry of the metal. Ligands effect the energy of d orbitals in a metal complex. This effect is dependent on the coordination geometry of a complex. In a tetrahedral geometry, the ligands will interact more with the orbitals from the xy, xz and yz planes. This forms the strongest bonding and antibonding interactions.

Fig. 4: To understand where ligands will strongly interact, the metal is placed in the center, and the ligands are arranged in a tetrahedral geometry. The ligands can interact more strongly with the xy, xz, and yz orbitals, since they are more in line with those orbitals. Weaker interactions occur with the z2 and x2-y2 orbitals, because the orbitals will not line up very well with where the ligand is located.

Since the tetrahedral geometry is different from other geometries, it is helpful to calculate the value for Ligand Field Stabilization Energy and compare this to other geometries. Each geometry has an equation, based on where the way in which electrons fill. The strength of LFSE for tetrahedral configurations are denoted by ∆t. The formula used for calculations is the following:

The stability of the Zn2+ is important for the proper function of ALAD. Recall that Zn2+ has a tetrahedral geometry. In the cell, zinc is usually bound to either water or a substrate.3 This is because Zn2+ has an open coordination site, due to the tetrahedral geometry. Zinc strives to be coordinately saturated, and have 18 electrons shared between the metal d-orbitals and ligands. When Zn2+ is bound to the ligands and either a water or substrate, it will have 18 electrons shared between the metal d-orbitals and the ligands. This leads to a greater stability.

The role of Zn2+ is not exclusively to bind to the substrate, and serve as a structural scaffold. Instead, it has also been proposed that it may first acts as an acid, and then a base, to catalyze the reaction. Another proposal is that it stabilizes the reaction intermediates.4

The exact mechanism is still unknown, however there are two majorly accepted proposed mechanisms.

Figure 6. An adaptation of the Jordan I and II mechanism from Jarrett et. al, 2000 and the scheme from Erdtman et. al, 2010. Currently the Jordan I mechanism is the most widely accepted mechanism.5 Zn2+ may appear to be just a structural scaffold, but it had other roles in the mechanism, which could not be achieved without Zn2+. 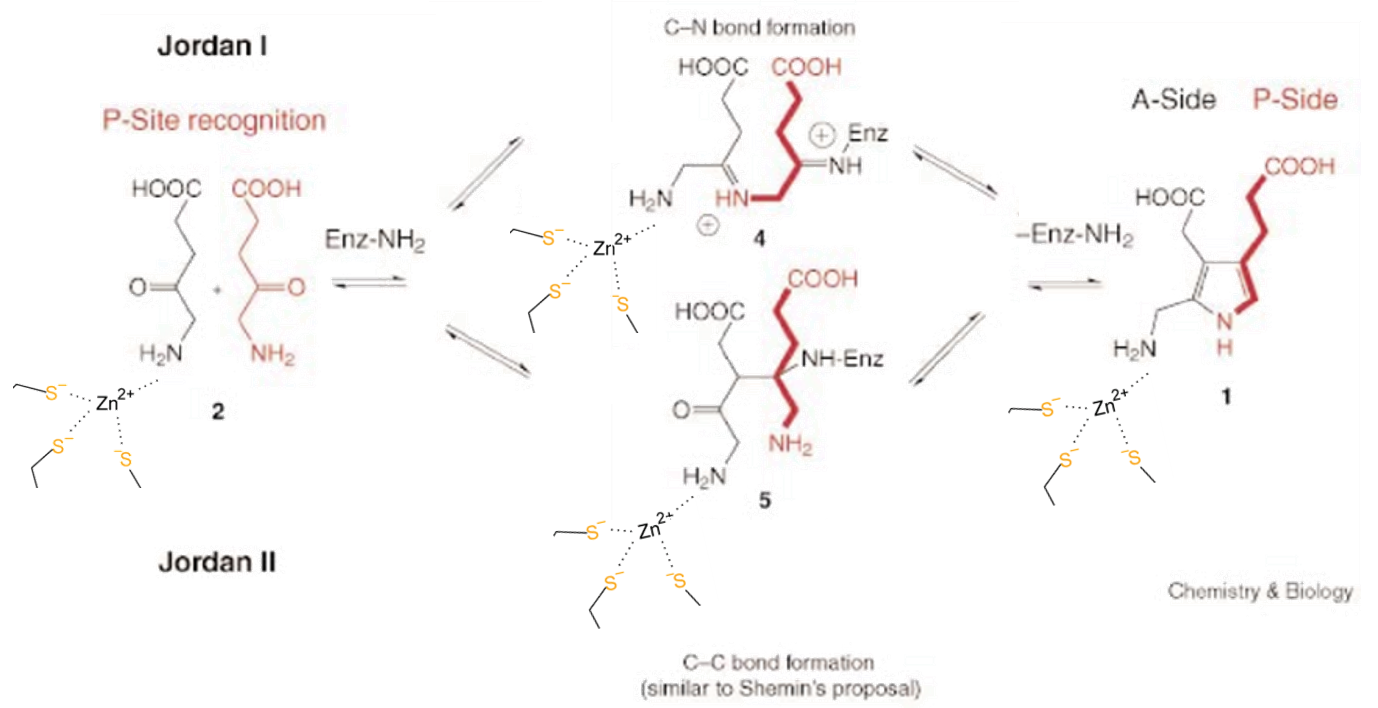 The reaction occurs because Zn2+ coordinates with the A side of the protein, along with one molecule of ALA. The P side also lines up a molecule of ALA, opposite of the A side. These then undergo an asymmetric addition to become a molecule of PBG.6 Water is produced as a waste. This PBG molecule will be transformed in many subsequent steps into a heme.

If there is inhibition of the Zn2+, perhaps in the form of lead poisoning. The function of the protein is disrupted. This is because lead is a softer acid than zinc, it binds more preferentially to the body. Lead does not perform as a lewis acid, and then base, and it does not stabilize reaction intermediates. This results in the inhibition of the healthy protein, and a reduced amount of heme found in the body.

ALAD is an enzyme that is vital to life. If ALAD is inhibited, there is a halt in production of hemes. Hemes are essential for functions like oxygen transport, oxygen storage, and electron transfer, to name a few. This is why it is important to prevent lead for entering the cell, despite the fact that ALAD does not undergo major conformational changes when substituted with lead. Without the Zn2+ metal center, the asymmetric reaction that is the first of many steps in heme synthesis would not be possible. While the role of zinc is debated, the physical properties dictate this biosynthesis. If ALAD becomes poisoned, there are many harmful effects, including neuro-visceral attacks, nausea, abdominal pain, or cognitive delay.

Since ALAD is found in every living cell, it is important to understand both its function and how lead inhibits this function. Without ALAD, heme production would be impossible. That’s something we never want to have happen.