When discussing cyclic organic molecules, we will often use sugars as examples, because they are such important molecules in biological chemistry. It is important to recall that many sugars exist in aqueous solution as both open-chain and cyclic forms.

Ring structures in organic molecules are usually five-membered or six-membered. Three-and four-membered rings are occasionally found in nature, but are significantly higher in energy. The relative instability of these smaller ring structures can be explained by a concept called angle strain, in which the four bonds around the sp3-hybridized carbons are forced out of their preferred tetrahedral angles. This strain is partially overcome by using so-called “banana bonds”, where the overlap between orbitals is no longer directly in a line between the two nuclei, as shown here in three representations of the bonding in cyclopropane:

Rings larger than 3 carbons have 3 dimensional shapes that relieve this bond strain, but it’s important to note that bond strain does affect stability. For cyclopropane and cyclobutane, the strain energy is about 110 kJ/mol. Cyclobutane can enter a “puckered” formation that slightly relieves some torsional strain. Cyclopentane, which is non-planar can remove some of the strain and has only about 25 kJ/mol of strain. One of the most important five-membered rings in nature is a sugar called ribose –  DNA and RNA are both constructed upon ‘backbones’ derived from ribose. Pictured below is one thymidine (T) deoxy-nucleotide from a stretch of DNA:

Cyclohexane and its derivatives

In six-membered cycloalkane structures, bonding angles are close to tetrahedral, and thus ring strain is not a factor – these rings are in fact very stable. However, the ‘flat’ drawings we have been using up to now do not accurately show the actual three-dimensional shape of a five- or six-membered ring. If cyclohexane were indeed flat, the bond angles would have to be distorted from 109.5 ° to 120 ° . If you build a model, though, you will find that when you rotate the carbon-carbon bonds so as to put the ring into a shape that resembles a reclining beach chair, all of the carbon-carbon bonds are able to assume tetrahedral bonding angles. 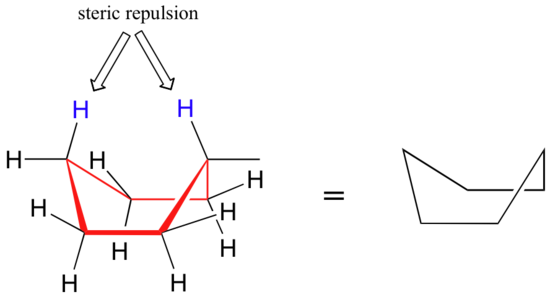 If you look carefully at your model of cyclohexane in the chair conformation, you will see that all twelve hydrogens are not equivalent in terms of their three-dimensional arrangement in space. Six hydrogens are axial – that is, they are pointing either straight up or straight down relative to the ring. The other six hydrogens are equatorial, meaning that they are pointing away from the perimeter of the ring, either slightly up or slightly down. (The equatorial vs axial distinction is often hard to see at first – it would be a very good idea at this point to sit down with your instructor or tutor and work with a modeling kit).

A very common error made by organic chemistry students as they begin to learn about chair conformations is to confuse the terms axial and equatorial with the terms cis and trans. These are completely different things!  For example, when two substituents on a ring are cis in relation to one another, it means that they are pointed to the same side of the ring (both up or both down). Depending on their positions on the ring, they might both be axial, both be equatorial, or one of each. Here’s some General Chemistry review: what is the value of Keq at 25 oC for the axial to equatorial interconversion of methylcyclohexane as shown in the previous figure?
[reveal-answer q=”830121″]Show Solution[/reveal-answer]
[hidden-answer a=”830121″]Recall from your General Chemistry course that DG0, the standard Gibbs Free Energy change of a reaction (or in this case, a conformational change) is related to the equilibrium constant Keq by:

Note that D G0 has a negative value because the methyl-axial to methyl-equatorial ring flip is an energetically downhill process. Because the equatorial conformation is more stable, it makes sense that the equilibrium constant for the ring flip is greater than 1.

As a general rule, the most stable chair conformation of a six-membered ring will be that in which the bulkiest groups are in the equatorial position .

To answer these questions, you will want to draw out the chair conformations of the compounds specified.

Can a ‘ring inversion’ change a cis-disubstituted cyclohexane to trans? Explain.

No.  In order to change the relationship of two substituents on a ring from cis to trans, you would need to break and reform two covalent bonds.  Ring flips involve only rotation of single bonds[/hidden-answer]