The 12C isotope of carbon - which accounts for up about 99% of the carbons in organic molecules - does not have a nuclear magnetic moment, and thus is NMR-inactive. Fortunately for organic chemists, however, the 13C isotope, which accounts for most of the remaining 1% of carbon atoms in nature, has a magnetic dipole moment just like protons. Most of what we have learned about 1H-NMR spectroscopy also applies to 13C-NMR, although there are several important differences.

The magnetic moment of a 13C nucleus is much weaker than that of a proton, meaning that NMR signals from 13C nuclei are inherently much weaker than proton signals. This, combined with the low natural abundance of 13C, means that it is much more difficult to observe carbon signals: more sample is required, and often the data from hundreds of scans must be averaged in order to bring the signal-to-noise ratio down to acceptable levels. Unlike 1H-NMR signals, the area under a 13C-NMR signal cannot easily be used to determine the number of carbons to which it corresponds. The signals for some types of carbons are inherently weaker than for other types – peaks corresponding to carbonyl carbons, for example, are much smaller than those for methyl or methylene (CH2) peaks. For this reason, peak integration is generally not useful in 13C-NMR spectroscopy.

The resonance frequencies of 13C nuclei are lower than those of protons in the same applied field - in an instrument with a 7.05 Tesla magnet, protons resonate at about 300 MHz, while carbons resonate at about 75 MHz. This is fortunate, as it allows us to look at 13C signals using a completely separate 'window' of radio frequencies. Just like in 1H-NMR, the standard used in 13C-NMR experiments to define the 0 ppm point is tetramethylsilane (TMS),

although of course in 13C-NMR it is the signal from the four equivalent carbons in TMS that serves as the standard. Chemical shifts for 13C nuclei in organic molecules are spread out over a much wider range than for protons – up to 200 ppm for 13C compared to 10-12 ppm for protons (see Table 3 for a list of typical 13C-NMR chemical shifts).

The chemical shift of a 13C nucleus is influenced by essentially the same factors that influence a proton's chemical shift: bonds to electronegative atoms and diamagnetic anisotropy effects tend to shift signals downfield (higher resonance frequency). In addition, sp2 hybridization results in a large downfield shift. The 13C-NMR signals for carbonyl carbons are generally the furthest downfield (170-220 ppm), due to both sp2 hybridization and to the double bond to oxygen.

How many sets of non-equivalent carbons are there in each of the molecules shown in exercise 9.2?

Because of the low natural abundance of 13C nuclei, it is very unlikely to find two 13C atoms near each other in the same molecule, and thus we do not see spin-spin coupling between neighboring carbons in a 13C-NMR spectrum. 13C nuclei are coupled to nearby protons, however, which results in complicated spectra. For clarity, chemists generally use a technique called broadband decoupling, which essentially 'turns off' C-H coupling, resulting in a spectrum in which all carbon signals are singlets. Below is the proton-decoupled 13C-NMR sectrum of ethyl acetate, showing the expected four signals, one for each of the carbons. We can also see a signal for the carbon atom in the deuterated chloroform (CDCl3) solvent (although a detailed discussion is beyond our scope here, it is interesting to note that this signal is split into a triplet by deuterium, which is NMR active and has three possible spin states rather than two). We can ignore the solvent signal when interpreting 13C-NMR spectra. While broadband decoupling results in a much simpler spectrum, useful information about the presence of neighboring protons is lost. However, another NMR technique called DEPT (Distortionless Enhancement by Polarization Transfer) allows us to determine how many hydrogens are bound to each carbon. This information is usually provided in problems in which you are asked to interpret the 13C-NMR spectrum of an unknown compound. (Details of how the DEPT technique works is beyond the scope of this book, but will be covered if you take a more advanced course in spectroscopy.)

One of the greatest advantages of 13C-NMR compared to 1H-NMR is the breadth of the spectrum - recall that carbons resonate from 0-220 ppm relative to the TMS standard, as opposed to only 0-12 ppm for protons. Because of this, 13C signals rarely overlap, and

we can almost always distinguish separate peaks for each carbon, even in a relatively large compound containing carbons in very similar environments. In the proton spectrum of 1-heptanol we saw earlier only the broad singlet of the alcohol proton (Ha) and the triplet for (Hb) are easily analyzed. The other proton signals overlap, making analysis difficult. In the 13C spectrum of the same molecule, however, we can easily distinguish each carbon signal, and we know from this data that our sample has seven nonequivalent carbons. (Notice also that, as we would expect, the chemical shifts of the carbons get progressively lower as they get farther away from the deshielding oxygen.) Below are 13C-NMR spectra for methylbenzene (common name toluene) and methyl methacrylate. Match the spectra to the correct structure, and make peak assignments. 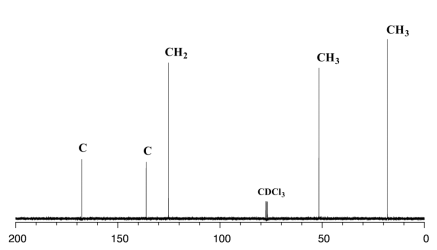 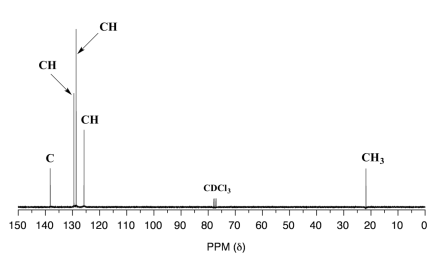 13C-NMR data for some common biomolecules are shown below (data is from the Aldrich Library of 1H and 13C NMR). Match the NMR data to the correct structure, and make complete peak assignments. Although only about 1 out of 100 carbon atoms in a naturally occurring organic molecule is a 13C isotope, chemists are often able to synthesize molecules that are artificially enriched in 13C at specific carbon positions. This can be very useful in biochemical studies, because it allows us to 'label' one or more carbons in a small precursor molecule and then trace the presence of the 13C label through a biosynthetic pathway all the way to the final product, providing insight into how the biosynthesis occurs. For example, scientists were able to grow bacteria in a medium in which the only source of carbon was acetate enriched in 13C at the C1 (carbonyl) position. When they isolated an isoprenoid compound called amino-bacterio-hopanetriol synthesized by the bacteria and looked at its 13C-NMR spectrum, they observed that the 13C label from acetate had been incorporated at eight specific positions. They knew this because the 13C-NMR signals for these carbons were much stronger compared to the same signals in a control (unlabeled) compound. This result was very surprising - the scientists had expected a completely different pattern of 13C incorporation based on what they believed to be the isoprenoid biosynthesis pathway involved. This unexpected result led eventually to the discovery that bacteria synthesize isoprenoid compounds by a completely different pathway then yeasts, plants, and animals. The newly discovered bacterial metabolic pathway is currently a key target for the development of new antibiotic and antimalaria drugs. (Eur. J. Biochem. 1988, 175, 405).