An understanding of bond dipoles and the various types of noncovalent intermolecular forces allows us to explain, on a molecular level, many observable physical properties of organic compounds. In this section, we will concentrate on solubility, melting point, and boiling point.

Biphenyl does not dissolve at all in water. Why is this? Because it is a very non-polar molecule, with only carbon-carbon and carbon-hydrogen bonds. It is able to bond to itself very well through nonpolar van der Waals interactions, but it is not able to form significant attractive interactions with the very polar solvent molecules. Thus, the energetic cost of breaking up the biphenyl-to-biphenyl interactions in the solid is high, and very little is gained in terms of new biphenyl-water interactions. Water is a terrible solvent for nonpolar hydrocarbon molecules: they are very hydrophobic (water-hating). 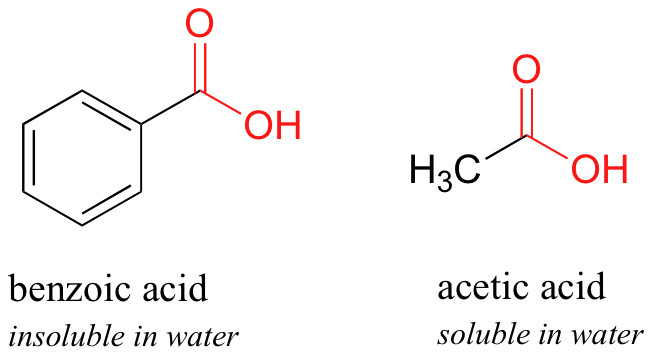 Some biomolecules, in contrast, contain distinctly hydrophobic components. The ‘lipid bilayer’ membranes of cells and subcellular organelles serve to enclose volumes of water and myriad biomolecules in solution. The lipid (fat) molecules that make up membranes are amphipathic: they have a charged, hydrophilic ‘head’ and a hydrophobic hydrocarbon ‘tail’. Notice that the entire molecule is built on a ‘backbone’ of glycerol, a simple 3-carbon molecule with three alcohol groups. In a biological membrane structure, lipid molecules are arranged in a spherical bilayer: hydrophobic tails point inward and bind together by van der Waals forces, while the hydrophilic head groups form the inner and outer surfaces in contact with water. Fatty acids are derived from animal and vegetable fats and oils. In aqueous solution, the fatty acid molecules in soaps will spontaneously form micelles, a spherical structure that allows the hydrophobic tails to avoid contact with water and simultaneously form favorable van der Waals contacts. The physical properties of alcohols are influenced by the hydrogen bonding ability of the -OH group. The -OH groups can hydrogen bond with one another and with other molecules. Arrange according to increasing solubility (start with lowest solubility)