Spectrophotometric instruments with multichannel detectors have no moving parts and are both more rugged and easier to makes small and portable relative to scanning wavelength instruments.

Historically the first widely used spectrophotometers were produced by Hewlett Packard in the late 1980's (now sold under the Agilent Cary label) such as the HP 8453 UV-Visible instrument pictured below in Figure \(\PageIndex{1}\). The optical layout of this instrument is shown in Figure \(\PageIndex{2}\). An instrument such as the HP 8453 simultaneously uses a tungsten halogen lam and a deuterium lamp to cover the 190 nm to 1100 nm spectral range.  The spectral bandwidth of 1 nm is limited by the size of the photodiode array and the fixed number of array elements.   Based on Si photdiodes the Beer's Law linearity is limited to less than 2 absorbance units.  Spectra can be acquired in a matter of only a a second or two second and the elements of this spectrophotometer has been incorporated into HPLC instruments.

Because to the digital nature of the instrument and the need to read the diode array, diode array spectrometers require either an internal or external computer.  However, by recording the entire absorption spectrum in each measurement, quantitative multi-component analyses can easily be overdetermined (completed at more than the minimum number of wavelengths  - 2 to two components, 3 for three components) allowing for uncertainties to be calculated. The Red Tide family of instruments use a USB interface and can be configured with a tungsten halogen lamp for work in the visible region ($1500) or a Xenon lamp for work in the UV and Visible regions ($4500).  The optical sources are contained in the smaller section of the instrument with the cuvette. The optical layout inside the dispersing and detecting elements of the Red Tide  spectophotometer are pictured in Figure \(\PageIndex{4}\) and contained in the larger section of the instrument underneath the colorful label. 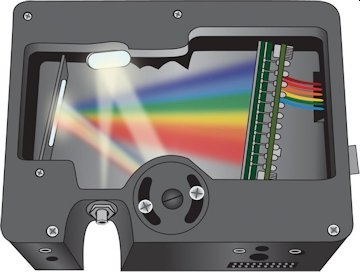 Figure \(\PageIndex{4}\): A cartoon sketch of the optical layout of the Red Tide spectrophotometer.

Light passing through a reference solution or a sample solution enters the spectrophotometer through the fiber optic assemble at the bottom of Figure \(\PageIndex{4}\).  The light is collimated by the reflector at the top of the picture then dispersed by the reflective grating under the rotatable (fixed in this picture by two Phillips head screws).  The dispersed light is reflected by the mirror on the left before striking the multichannel CCD detector on the right.

As in the HP photodiode array instrument the spectral band pass, 2 nm in this instrument, is limited by the size of the instrument and the number of detector elements in the CCD array.   The Beer's Law linearity is also limited to about 2 absorbance units.

The Vernier SpectoVis Plus Spectrophotometer

It is likely that you are already used a spectrophotometer with a multichannel detector in your high school or first year chemistry laboratory course.  Because of it's low cost ($400) the Vernier SpectroVis Plus, pictured in Figure \(\PageIndex{5}\), has been widely adopted in many instructional laboratories. The SpectroVis Plus also uses a USB interface to connect to either a Vernier LabQuest or a computer for instrument control and data processing.

As shown in Figure \(\PageIndex{6}\) the SpectroVis Plus can be used for absorption and luminescence spectroscopy. Figure \(\PageIndex{6}\): The optical layout of the Vernier SpectroVis Plus.

The SpectroVis Plus uses a small tungsten halogen lamp for absorption spectroscopy only in the visible region of the spectrum (380 - 950 nm) and is equipped with both a green LED and a Blue LED for luminescence measurements of compounds like compounds such as fluorescein, chlorophyll, or GFP.   Dispersion of the white light or emission is accomplished with a transmission grating with a resulting spectral band pass of 4 nm.  The photodetector in the Spectrovis Plus is a linear CCD array detetor.