There are four major optical sources used in benchtop instruments for molecular spectroscopy in the UV and visible.  These sources are (1) the tungsten or tungsten-halogen lam, (2) the deuterium lamp, (3) the xenon arc lamp.  All of these sources are broadband sources that emit significant intensities of light over a wide range of wavelengths.  At the end of this section light emitting diodes and lasers were will be described because of their use in optical spectroscopy and as examples of discrete wavelength sources.

The tungsten lamp or tungsten halogen lamp is a blackbody emitter that produces useful radiation over the range from 320 nm to 2400 nm.  A picture of a tungsten lamp is shown in Figure 7.2.1 and an example of the spectral output of this lamp is shown in Figure 7.2.2.  The lamp consists of a tungsten filament in a evacuated glass or quartz envelope that contains a small amount of iodine vapor to increase the lifetime of the filament.   The light from a tungsten lamp is randomly polarized and incoherent.  This low cost optical source is the most common source for absorption spectroscopy in the visible region of the spectrum. Figure \(\PageIndex{1}\): Picture is a (dead) tungsten halogen from a Spec20 spectrophotomter. Figure \(\PageIndex{2}\): The output spectrum from a tungsten halogen lamp. Figure\(\PageIndex{3}\): Pictured is a (dead) deuterium lamp from a Varian absorbance detector for liquid chromatography. Figure \(\PageIndex{4}\): The output spectrum of a deuterium lamp with either a UV-glass or quartz envelope.

The xenon arc lamp is a gas discharge lamp the produces useful radiation of the range from 190 nm to 1100 nm.  The light from a xenon lamp is randomly polarized and incoherent.  Pictured in Figure 7.2.5 is the xenon flicker lamp found in the Cary 50 and Cary 60 absorption spectrometers sold by the Agilent Corp, in Figure 7.2.6 is a high pressure, how power xenon arc lamp typically found in instruments for fluorescence spectroscopy and in Figure 7.2.7 is the output spectrum of a 150 W xenon lamp with the characteristic peak at 467 nm..  In general as the pressure of xenon inside the lamp the broad background increases in intensity and intensity the discrete atomic lines becomes less apparent. Lasers have been dependable and commercially available light sources since the early 1970's.  The word laser stands for light amplification by stimulated emission.  As shown in Figure 7.2.8 a laser consists of a lasing medium contained within a resonant cavity from by a high reflector (100% reflector) and an output coupler from which the laser light leaks out.  Energy must be pumped into the lasing medium which could come from a current, a discharge or a flashlamp.

As shown in Figure 7.2.9 for the case of a Nd3+ laser, energy pumped into the system is absorbed and the energy is quickly transferred among the excited Nd3+ ions placing them in the upper lasing electronic state, 4F3/2.  The resonant cavity is set to have a round trip distance equal to an integral number of wavelengths of the light emitted corresponding to the energy difference between the upper and lower lasing states.  Because of the resonant condition the emission process is stimulated and the emitted light is both very monochromatic and coherent.  Often, but not for all lasers, the emitted light is linearly polarized.

A list of lasers commonly found in chemistry labs and some of their characteristics is shown in the table below:

Lasers are discrete wavelength sources and while they might emit light at a few wavelengths, they are generally not tunable light sources.  When combined with a dye laser or an optical parametric oscillator the light can be tuned over a narrow range of wavelengths, especially relative to a broadband, blackbody, light source.   Despite the lack of tunablity, lasers are widely used as sources for emission spectroscopy and because of the very high peak power pulsed lasers are used for photoionization and matrix assisted laser desorption (MALDI) sources in mass spectrometry.

The use of small, low-cost, and rugged light emitting diodes (LED's) has expanded greatly in the past few years, well beyond the red LEDs commonly seen on display panels.  Now available with emission wavelengths ranging from the UV (365 nm), through the visible, to the near infrared (990nm) single LED's or banks of LEDs can be used as light sources for both emission and absorption spectroscopy.

As shown in Figure  7.2.10, light is emitted from a forward biased LED when the holes in the p-type semiconductor material and carriers in the adjacent n-type semiconductor recombine and release energy in an amount equal to the band gap.  The typical bandwidth of the light emitted is on the order of 25 nm and light light is incoherent and randomly polarized. Figure \(\PageIndex{10}\): A light emitting diode shown in (a) using the diode symbol, (b) with the carriers and holes in the n-type and p-type semiconductor materials shown combining, in (c) the band description for an LED.

LEDs of a wide variety of wavelengths find uses as sources for emission spectroscopy, especially in small portable instruments and fluorescence microscopes.

For absorption spectroscopy, especially in small portable instruments such as the Red Tide Spectrometer from Ocean Optics or the SpectroVis spectrometer from Vernier, a white light LED is required.  In a white light LED the emission from a blue light emitting LED at 450 nm is used to excite a Ce3+ doped YAG phosphor producing yellow light over the range of 500 nm - 700 nm.  The combination of blue excitation light and yellow phosphorescence, shown in Figure 7.2.11 produce "white" light spanning the range of 425 nm - 700 nm.  Similar LED lights are available today as low energy, long-life, replacements for incandescent and fluorescent light bulbs in your home. 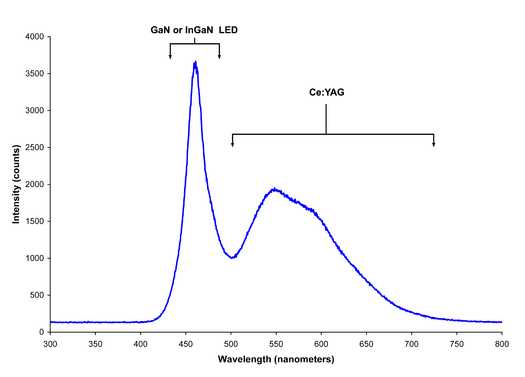 Figure \(\PageIndex{}\): The spectrum emanating from a white light LED.