Colloids share many properties with solutions. For example, the particles in both are invisible without a powerful microscope, do not settle on standing, and pass through most filters. However, the particles in a colloid scatter a beam of visible light, a phenomenon known as the Tyndall effectThe phenomenon of scattering a beam of visible light.,The effect is named after its discoverer, John Tyndall, an English physicist (1820–1893). whereas the particles of a solution do not. The Tyndall effect is responsible for the way the beams from automobile headlights are clearly visible from the side on a foggy night but cannot be seen from the side on a clear night. It is also responsible for the colored rays of light seen in many sunsets, where the sun’s light is scattered by water droplets and dust particles high in the atmosphere. An example of the Tyndall effect is shown in Figure 9.6.1 Figure 9.6.1 Tyndall Effect, the Scattering of Light by Colloids The glass on the left has dilute colloidal silver, the one on the right tap water. The red laser pointer beam is scattered by the Tyndall effect in the glass on the left. 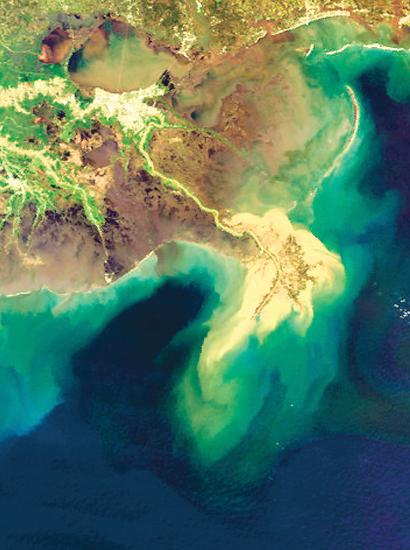 Figure 9.6.2 Formation of New Land by the Destabilization of a Colloid Suspension This satellite photograph shows the Mississippi River delta from New Orleans (top) to the Gulf of Mexico (bottom). Where seawater mixes with freshwater from the Mississippi River, colloidal clay particles in the river water precipitate (tan area).

Aggregation and precipitation can also result when the outer, charged layer of a particle is neutralized by ions with the opposite charge. In inland waterways, clay particles, which have a charged surface, form a colloidal suspension. High salt concentrations in seawater neutralize the charge on the particles, causing them to precipitate and form land at the mouths of large rivers, as seen in the satellite view in Figure 9.6.2. Charge neutralization is also an important strategy for precipitating solid particles from gaseous colloids such as smoke, and it is widely used to reduce particulate emissions from power plants that burn fossil fuels. A large class of biological molecules called phospholipidsA large class of biological, detergent-like molecules that have a hydrophilic head and two hydrophobic tails and that form bilayers. consists of detergent-like molecules with a hydrophilic head and two hydrophobic tails, as can be seen in the molecule of phosphatidylcholine. The additional tail results in a cylindrical shape that prevents phospholipids from forming a spherical micelle. Consequently, phospholipids form bilayersA two-dimensional sheet consisting of a double layer of phospholipid molecules arranged tail to tail., extended sheets consisting of a double layer of molecules. As shown in part (b) in Figure 9.6.3, the hydrophobic tails are in the center of the bilayer, where they are not in contact with water, and the hydrophilic heads are on the two surfaces, in contact with the surrounding aqueous solution.