We witness and utilize changes of physical state, or phase transitions, in a great number of ways. As one example of global significance, consider the evaporation, condensation, freezing, and melting of water. These changes of state are essential aspects of our earth’s water cycle as well as many other natural phenomena and technological processes of central importance to our lives. In this module, the essential aspects of phase transitions are explored.

When a liquid vaporizes in a closed container, gas molecules cannot escape. As these gas phase molecules move randomly about, they will occasionally collide with the surface of the condensed phase, and in some cases, these collisions will result in the molecules re-entering the condensed phase. The change from the gas phase to the liquid is called condensation. When the rate of condensation becomes equal to the rate of vaporization, neither the amount of the liquid nor the amount of the vapor in the container changes. The vapor in the container is then said to be in equilibrium with the liquid. Keep in mind that this is not a static situation, as molecules are continually exchanged between the condensed and gaseous phases. Such is an example of a dynamic equilibrium, the status of a system in which reciprocal processes (for example, vaporization and condensation) occur at equal rates. The pressure exerted by the vapor in equilibrium with a liquid in a closed container at a given temperature is called the liquid’s vapor pressure (or equilibrium vapor pressure). The area of the surface of the liquid in contact with a vapor and the size of the vessel have no effect on the vapor pressure, although they do affect the time required for the equilibrium to be reached. We can measure the vapor pressure of a liquid by placing a sample in a closed container, like that illustrated in Figure \(\PageIndex{1}\), and using a manometer to measure the increase in pressure that is due to the vapor in equilibrium with the condensed phase.

Figure \(\PageIndex{1}\): In a closed container, dynamic equilibrium is reached when (a) the rate of molecules escaping from the liquid to become the gas (b) increases and eventually (c) equals the rate of gas molecules entering the liquid. When this equilibrium is reached, the vapor pressure of the gas is constant, although the vaporization and condensation processes continue.

Given the shown structural formulas for these four compounds, explain their relative vapor pressures in terms of types and extents of IMFs:

Diethyl ether has a very small dipole and most of its intermolecular attractions are London forces. Although this molecule is the largest of the four under consideration, its IMFs are the weakest and, as a result, its molecules most readily escape from the liquid. It also has the highest vapor pressure. Due to its smaller size, ethanol exhibits weaker dispersion forces than diethyl ether. However, ethanol is capable of hydrogen bonding and, therefore, exhibits stronger overall IMFs, which means that fewer molecules escape from the liquid at any given temperature, and so ethanol has a lower vapor pressure than diethyl ether. Water is much smaller than either of the previous substances and exhibits weaker dispersion forces, but its extensive hydrogen bonding provides stronger intermolecular attractions, fewer molecules escaping the liquid, and a lower vapor pressure than for either diethyl ether or ethanol. Ethylene glycol has two −OH groups, so, like water, it exhibits extensive hydrogen bonding. It is much larger than water and thus experiences larger London forces. Its overall IMFs are the largest of these four substances, which means its vaporization rate will be the slowest and, consequently, its vapor pressure the lowest.

As temperature increases, the vapor pressure of a liquid also increases due to the increased average KE of its molecules. Recall that at any given temperature, the molecules of a substance experience a range of kinetic energies, with a certain fraction of molecules having a sufficient energy to overcome IMF and escape the liquid (vaporize). At a higher temperature, a greater fraction of molecules have enough energy to escape from the liquid, as shown in Figure \(\PageIndex{2}\). The escape of more molecules per unit of time and the greater average speed of the molecules that escape both contribute to the higher vapor pressure. Figure \(\PageIndex{2}\): Temperature affects the distribution of kinetic energies for the molecules in a liquid. At the higher temperature, more molecules have the necessary kinetic energy, KE, to escape from the liquid into the gas phase. 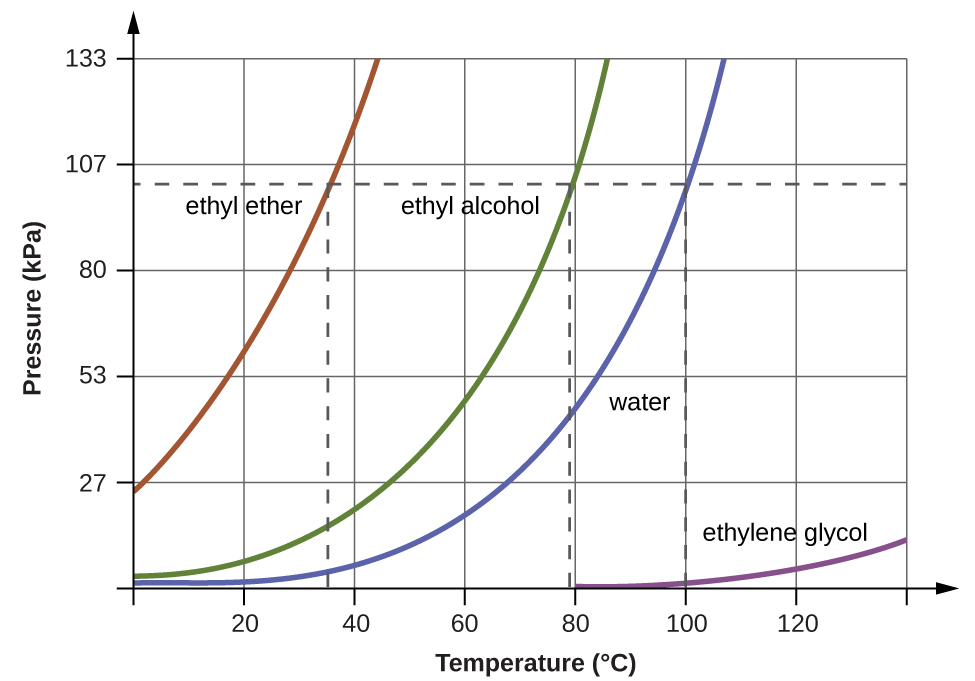 Figure \(\PageIndex{3}\): The boiling points of liquids are the temperatures at which their equilibrium vapor pressures equal the pressure of the surrounding atmosphere. Normal boiling points are those corresponding to a pressure of 1 atm (101.3 kPa.)

A typical atmospheric pressure in Leadville, Colorado (elevation 10,200 feet) is 68 kPa. Use the graph in Figure \(\PageIndex{3}\) to determine the boiling point of water at this elevation.

The boiling point of ethyl ether was measured to be 10 °C at a base camp on the slopes of Mount Everest. Use Figure \(\PageIndex{3}\) to determine the approximate atmospheric pressure at the camp.

The quantitative relation between a substance’s vapor pressure and its temperature is described by the Clausius-Clapeyron equation:

Equation \(\ref{10.4.1}\) is often rearranged into logarithmic form to yield the linear equation:

Since the constant, ln A, is the same, these two equations may be rearranged to isolate \(\ln A\) and then set them equal to one another:

which can be combined into:

Isooctane (2,2,4-trimethylpentane) has an octane rating of 100. It is used as one of the standards for the octane-rating system for gasoline. At 34.0 °C, the vapor pressure of isooctane is 10.0 kPa, and at 98.8 °C, its vapor pressure is 100.0 kPa. Use this information to estimate the enthalpy of vaporization for isooctane.

Since we have two vapor pressure-temperature values

Note that the pressure can be in any units, so long as they agree for both P values, but the temperature must be in kelvin for the Clausius-Clapeyron equation to be valid.

For benzene (C6H6), the normal boiling point is 80.1 °C and the enthalpy of vaporization is 30.8 kJ/mol. What is the boiling point of benzene in Denver, where atmospheric pressure = 83.4 kPa?

Video \(\PageIndex{2}\): An overview of the role of vapor pressure on boiling point.

Vaporization is an endothermic process. The cooling effect can be evident when you leave a swimming pool or a shower. When the water on your skin evaporates, it removes heat from your skin and causes you to feel cold. The energy change associated with the vaporization process is the enthalpy of vaporization, \(ΔH_{vap}\). For example, the vaporization of water at standard temperature is represented by:

As described in the chapter on thermochemistry, the reverse of an endothermic process is exothermic. And so, the condensation of a gas releases heat: Solution We start with the known volume of sweat (approximated as just water) and use the given information to convert to the amount of heat needed:

How much heat is required to evaporate 100.0 g of liquid ammonia, \(\ce{NH3}\), at its boiling point if its enthalpy of vaporization is 4.8 kJ/mol? Video \(\PageIndex{3}\): An overview of phase changes with regards to kinetics.

Clausius-Clapeyron equation
mathematical relationship between the temperature, vapor pressure, and enthalpy of vaporization for a substance

condensation
change from a gaseous to a liquid state

deposition
change from a gaseous state directly to a solid state

freezing
change from a liquid state to a solid state

freezing point
temperature at which the solid and liquid phases of a substance are in equilibrium; see also melting point

melting
change from a solid state to a liquid state

melting point
temperature at which the solid and liquid phases of a substance are in equilibrium; see also freezing point