In 1911, Ernest Rutherford applied a beam of alpha particle to a gold foil. This experiment helped him to determine the positive center of the atom, which he named the nucleus. Eight years later, this same scientist discovered the existence of proton by performing the following nuclear reaction:

This reaction is an example of artificial transmutation. By taking a particle and hitting any existing nucleus, a new atom will be synthesized artificially. Note how this reaction differs from a decay/emission reaction. In the latter type of reaction, only one reactant will produce at least two products. Transmutations will illustrate a minimum of two reactants and various number of products.

Label each as being an artificial transmutation or a decay reaction.

a) Only reactions b and e are artificial transmutations. The other reactions are examples of decays/emissions.

Throughout the 1930's, many scientists became focused on producing new radioactive elements. Before this time period, newly discovered elements were extracted from natural ores obtained from mining. Irene (daughter of Marie and Pierre Curie) and her husband Frederic Joliot-Curie bombarded existing elements with alpha particles. These experiments yielded new radioactive isotopes by an artificial process. For their efforts, Irene and Frederic were awarded the 1935 Noble Prize in chemistry. One of their key syntheses involve the bombardment of aluminum foil with alpha particles.

In their laboratory, the Joliet-Curies could not explain or identify the existence of the neutron. Their measurements showed that an additional, non-charged substance was produced in the aluminum foil reaction. They hypothesized that this unknown piece of the reaction must be a gamma ray, which has a neutral charge.

The Significance of Artificial Transmutation

Unfortunately, the Joliot-Curies were incorrect in their analysis. Around the same time, a British scientist named James Chadwick bombarded beryllium with alpha particles to produce the species below:

Using this reaction, he was able to characterize and explain the existence of this new atomic subatomic particle. He noted this atomic piece was the same mass as a proton, but had no charge. In 1935, James Chadwick was awarded the Nobel Prize in physics for the discovery of the neutron.

Translate the following reactions to A/Z symbols. Balance these artificial transmutations by finding the missing pieces.

Artificial transmutation has been utilized to make new elements. All elements with atomic numbers greater than 92 are produced synthetically. These elements are called transuranium elements and have been prepared by bombarding suitable target nuclei with smaller particles. The first of the transuranium elements to be made was neptunium (Z = 93), which was synthesized in 1940 by bombarding a 238U target with neutrons. As shown below, this reaction occurs in two steps. Initially, a neutron combines with a 238U nucleus to form 239U, which is unstable and undergoes beta decay to produce 239Np:

Bombarding the target with more massive nuclei creates elements that have atomic numbers significantly greater than that of the target nucleus (Table \(\PageIndex{1}\)). Such techniques have resulted in the creation of the superheavy elements 114 and 116, both of which lie in or near the “island of stability." As of this writing, 22 transuranium elements have been produced and officially recognized by IUPAC; several other elements have formation claims that are waiting for approval.

To perform artificial transmutation reactions, there are two large machines that can be utilized. A device called a particle accelerator can accelerate positively charged particles to the speeds needed to overcome the electrostatic repulsions between them and then target nuclei by using electrical and magnetic fields. Operationally, the simplest particle accelerator is the linear accelerator (Figure \(\PageIndex{2}\)), in which a beam of particles is injected at one end of a long evacuated tube. A modern linear accelerator such as the Stanford Linear Accelerator (SLAC) at Stanford University is about 2 miles long.

To achieve the same outcome in less space, a particle accelerator called a cyclotron forces the charged particles to travel in a circular path rather than a linear one. The particles are injected into the center of a ring and accelerated by rapidly alternating the polarity of two large D-shaped electrodes above and below the ring, which accelerates the particles outward along a spiral path toward the target.

Fission and Fusion: Selecting the Isotopes

Fission is the splitting of an atomic nucleus. In nuclear weapons and reactors, neutrons hit unstable nuclei to form smaller atoms. Nuclei that are larger than Fe-56 may undergo fission. Of these elements, fission requires heavy, unstable nuclei. This means selected atoms would have low binding energies and would have large atomic masses. Figure four shows the relative binding energies for various isotopes. According to figure 4, uranium-238 and uranium-235 both have lower binding energies with heavy masses-. These two isotopes would be suitable for splitting based on these requirements. Of these two isotopes, only uranium-235 is readily fissionable. This is due to odd neutron count contributing to additional instability. Another fissionable isotope not shown in figure 4 is plutonium-239. This is a synthetic isotope produced by transmutation and decay reactions. Like uranium-235, it has low binding energy, high mass, and an odd number of neutrons. U-235 and Pu-239 are used in atomic bombs (fission based) and nuclear reactors.

Fusion is the bringing together of two atomic nuclei to form a larger atom. Positively charged centers of atoms make this type of reaction extremely difficult. For this reason, smaller atoms are suitable for fusion reactions. In addition, these particular isotopes need to have low binding energies in order to undergo fusion. Atoms that possess these two qualities are H-2 and H-3. For fusion to occur, extreme temperatures are required to fuse these deuterium and tritium together.

In both fission and fusion, large amounts of energy are given off in the form of heat, light, and gamma radiation. Italian physicist, Enrico Fermi, performed the first fission reaction in 1934. He was unaware that he had split a uranium atom into two smaller nuclei. Four years later, two German scientists, Otto Hahn and Fritz Strassman, repeated Fermi's uranium reaction. While performing this experiment, two other scientists, Lise Meitner and Otto Frisch, analyzed the data. Meitner, an Austrian physicist,noted that the uranium atom had split into two smaller pieces. She used the term "fission" to describe her observations. 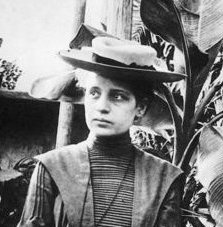 Austrian physicist, Lise Meitner who coined the term "fission" to explain the neutron bombardment of U-238. Image take from: https://upload.wikimedia.org/wikiped...ner12crop2.JPG

The nuclear equation illustrating this fission reaction is shown below:

The products shown are only one of many sets of products from the disintegration of a \(\ce{U}\)-235 nucleus. Over 35 different elements have been observed in the fission products of \(\ce{U}\)-235. Fission has been used in nuclear weapons and powers all nuclear reactors. Approximately fifty-five countries world wide possess fission technology in the form of research or energy reactors. Less than ten of these countries have fission weapons.

On the other hand, fusion technology is not as accessible. Only five countries (five permanent members of the United Nations Security Council) have knowledge and scientific capability of constructing fusion weapons. Unlike fission reactors. there are no commercial fusion reactors. Fusing nuclei is quite difficult to perform in a safe and controlled environment. For more insight as the the differences between fission and fusion, click on the informational video below.

Although Albert Einstein was not directly involved in the construction of nuclear weapons, he did devise a theory to explain the amount of energy released during a nuclear reaction (fission or fusion). This theory is known as special relativity as is shown below:

Naturally radioactive elements exist in the earth and are either alpha or beta emitters. Artificial transmutation of elements can be accomplished by bombarding the nuclei of some elements with alpha or subatomic particles. .