Nuclear Fusion is the process by which two elements collide to form a new element, releasing a tremendous amount of energy much greater than that of a fission reaction. Similar to nuclear fission, the mass of the resulting element does not exactly match the combined masses of the two smaller elements, but is converted to energy. Stars throughout the universe, including our Sun, release energy through the fusion of two hydrogen atoms into a single helium atom (Figure 3). While electrostatic forces of repulsion would normally drive the positively-charged regions of two hydrogen nuclei away from each other and prevent such a reaction, the extreme heat (15,000,000 °C in the Sun) and density of a star overcomes these forces and allows fusion to occur. With so much potential as a source of energy, the prospect of a fusion reactor on Earth has become a highly sought after technological advancement, even though the challenges of creating such a reactor are immense. 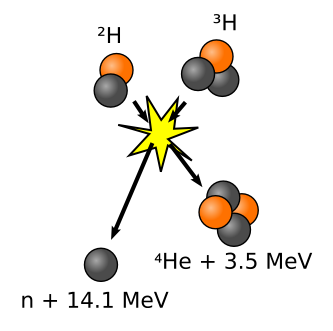 The most promising reaction being attempted by scientists today to produce fusion power is the collision of two hydrogen isotopes, deuterium (2H) and tritium (3H), to produce a 4He atom, a neutron, and a large quantity of energy. Just as in a star, however, the nuclei of the hydrogen isotopes repel each other and must be brought together for fusion at extremely high thermal energies reaching 150,000,000 °C (ten times greater than that required in the Sun). At temperatures this high, the reactant gases transform into a plasma- a hot, fully ionized gas consisting of atomic nuclei and electrons. A problem of central importance to the as of yet theoretical fusion reactor is containing that plasma so that it does not lose thermal energy by touching surrounding materials. A collaborative effort funded by multiple nations known as the International Thermonuclear Experimental Reactor (ITER) aims to solve this problem by confining the plasma in a magnetic field created by powerful superconducting magnets. Such a design is known as a tokamak reactor (See Figure 4). 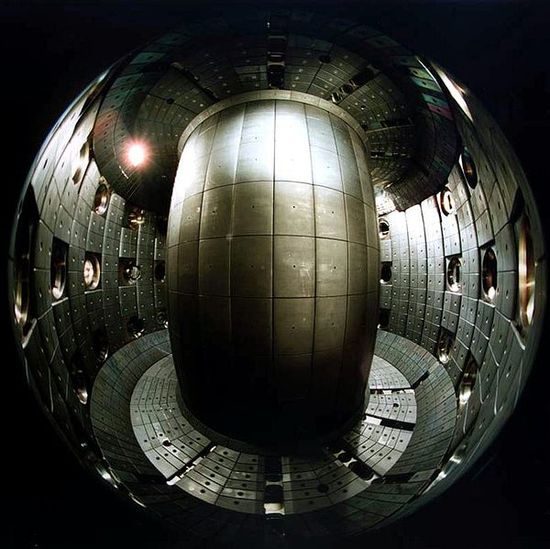 While the feasibility of a controlled fusion reaction occurring on Earth has yet to be adequately verified, the potential benefits of fusion as opposed to fission may be immense. Deuterium may be extracted from water and lithium, the tritium source for the fusion reaction, is estimated to exist on earth in quantities that will last for one million years. Additionally, there is far less nuclear waste that decays much faster compared to that produced by fission.

Fusion is even more appealing than fission as an energy source because no radioactive waste is produced and the only reactant needed is hydrogen. However, fusion reactions only occur at very high temperatures - in excess of \(40,000,000^\text{o} \text{C}\). No known materials can withstand such temperatures, so there is currently no feasible way to harness nuclear fusion for energy production, although research is ongoing.