On behalf of Diablo Valley College’s Vertical Farming Project Team, I created this page specifically to report a summary about the Project – as agreed with the current Principal Investigator (P.I.), Dr. Ronald Rusay. I limit the timeline to this semester, Spring 2018, because this semester bloomed the most progress from the past couple of semesters. Furthermore, the summary may contain personal accounts yet I focus on the Team as much as I can. Anyone involved in the Project during this semester can edit and add their own summarized accounts this page – as long as those changes are transferred onto the public page.

To begin with, the Project team assembled as slowly as the sun warmed the college campus. The semester started around the middle of January, but we had yet to officially install the independent study courses related to this Project: CHEM-298 and CHEM-299. There was an issue with the enrollment paperwork and recruiting. In the end, we managed to enroll students who were interested into either course; we also acquired a brand new face! Though the semester progressed with hassling energy, the Team still slowly trudged forward as we reinvented the leadership roles and meeting times and place. Dr. Rusay could no longer serve as the Advisor for the semester due to an increasing amount of duties as P.I., but he agreed to hand over the role to the Greenhouse Manager, Professor Michelle Eyestone. Additionally we relocated meeting places from the Physical Science Building to the Horticulture Area, cutting the foot traffic between both locations. To bridge the gap between Dr. Rusay and Professor Eyestone and the Projects members, Ryan Gilardy, Peter Swenson and myself were appointed as Project Managers to coordinate and work among the Team.

Migrating to the main worksite and having leaders who were students were a few factors that boosted the energy in the Team. Truly, though, the team members were the ones who really jumpstarted the Project with the renewed energy. By the beginning of February, specifically the 10thof the month, we had our very first Build Day. Everyone’s hands were steadily carrying, drilling, gluing – moving the productivity of the Project. Loud whirring of drills were heard by the drill station; thuds happened after the PVC grow beds (made out of 6-inch PVC tubes) met the table tops; foot steps scurried in and out of the greenhouse once an instruction was given. That kind of productivity was then tempered a bit so the Team can discuss how the major components would fit in a general aquaponic system. Thus, the rest of the month was spent understanding the functions of each component, which was made easier by having instant access to the greenhouse and visualize these components. By the end of the month, we were ready to temporarily function without one Project Manager, Ryan Gilardy.

Although we were featured in the Diablo Valley College’s newspaper, The Inquirer, the news was bittersweet since Ryan was recovering from surgery that had been schedule in the beginning of March. We prepared ways to communicate with him while he was recovering, but we had to give him a couple of weeks to focus on his health. Peter and I tried our best to connect the dots with what we knew, but each member expressed their talents more and more as the two of us figured out what direction to take.

The need to focus on the Engineering aspect became more evident in the middle of month. Brandon Change constantly made initiatives to build the system and figure out how the components connected. The Biochemistry Division may not have been hands-on at that point, but they (Bond Bortman, Taylor Mason, and Gerrik Labra) did a fantastic job researching on ways to solve future issues, such as pest control and buffering the water, until the research aspects had to be called off. (Practicing what they research would have to be done after the system had been built.) There was a bit of disconnect between the Project and the Information Technology (I.T.) Division, but they persisted in openly communicating what needs to be done on their end. However, after the items for I.T. were transferred over to the Horticulture Area, Ryan Morelli and Gerardo De La Torre made bigger strides in working together test the Raspberry Pi’s we had. Other members did contribute from this month to next: Ramiro Pacheco finished 2D designs of each component and their size; Ryan Doranilo had sent all the documented photos he took since the beginning of the semester; Diane Tobit still managed our one of our main electronic communication, Slack; Ryan Moschiano helped with the experiments related to water flow; a list will be made for additional contributions from members/volunteers who have yet to be mentioned. I also gratefully note how the staff and students in the Horticulture area have been a great help with their genuine interest that supported our morale and generosity for allowing us to borrow the tools we needed.

Spring Break gave the Team an opportunity to take a short break before trudging on more tasks. The month of April marked the time we created more budgets and picked up our orders for more supplies. We already beforehand that we would constantly need resources as we went along but gathering supplies was still not enough at the time. We clearly needed instructions on how to connect these pieces, but I unfortunately admit that I could be the living manual they needed. The month stretched our patience thin, yet we still continued making progress, focusing on the bio-filter for the moment. Thus John Calhoun did a swell job timing his presentation is ideas for a sand-based filter. We received more pleasant surprises that day when Ryan arrived with his walker. Once Ryan entered the worksite, our productive steadily increased once again. Even with his return, the Team still dealt with mistakes, but we effectively sought out solutions for those.

Now the semester nears to an end in this month of May. Our progress is significant – as seen from our rough start with only one aquarium fish tank and some PVC poles to our promising end with a standing skeleton that is almost assembled. That skeleton only needs to connect the pumps and sensors within its system. Unfortunately, we cannot input those finer details but we still progressed despite the slow reality. Because of that, I am proud to have been part of this Vertical Farming Project.

Photos from the semester: 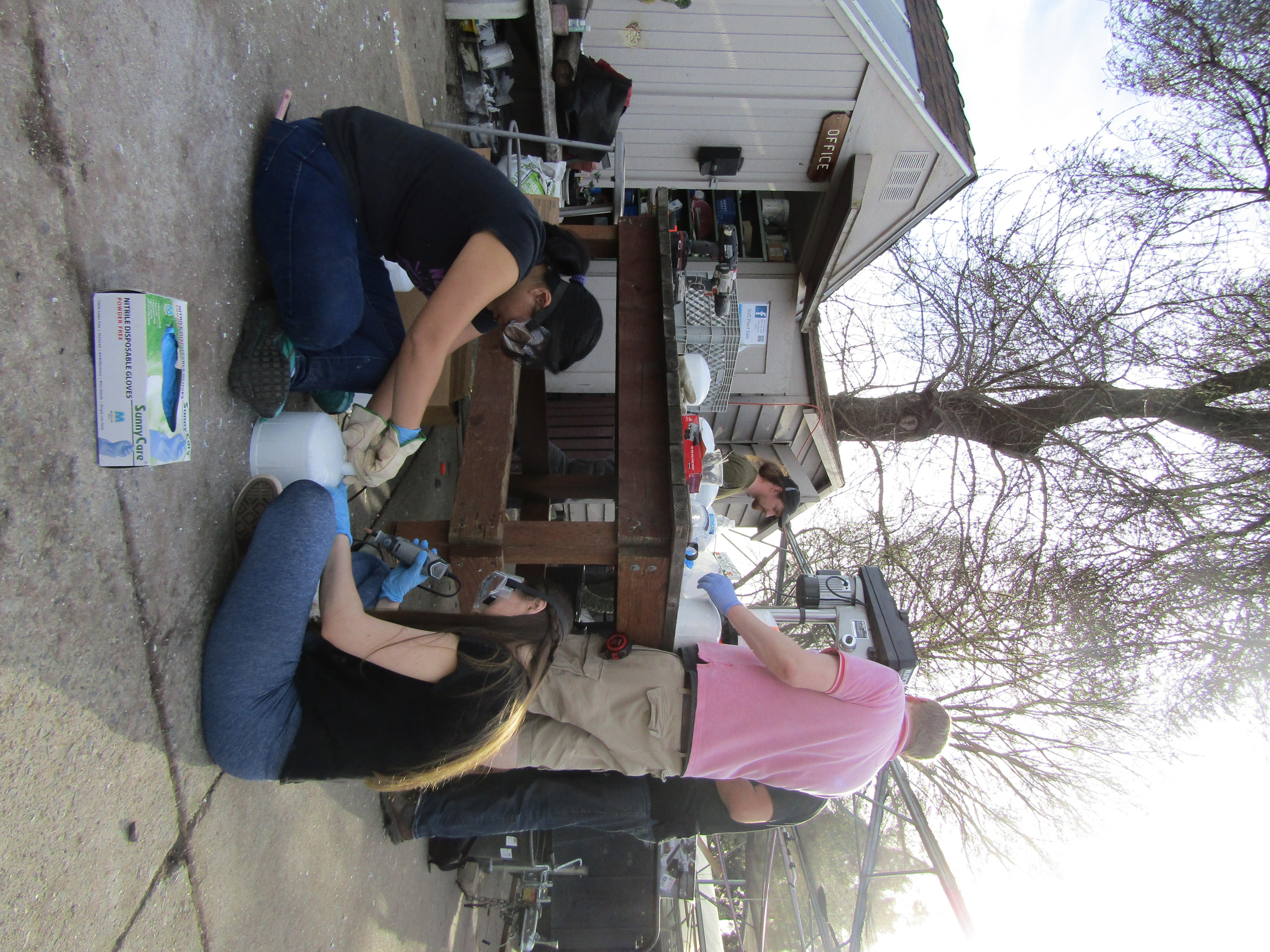 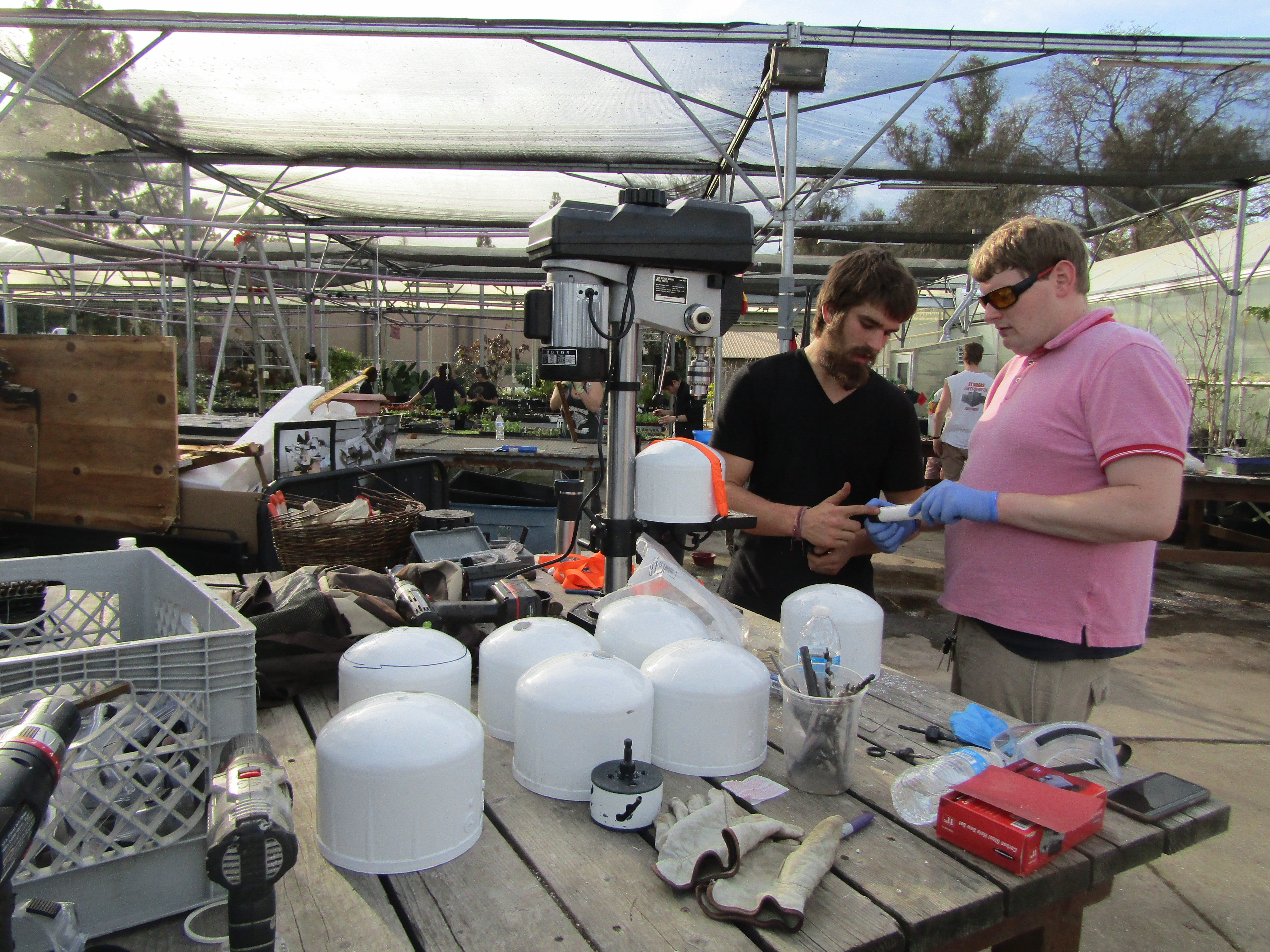 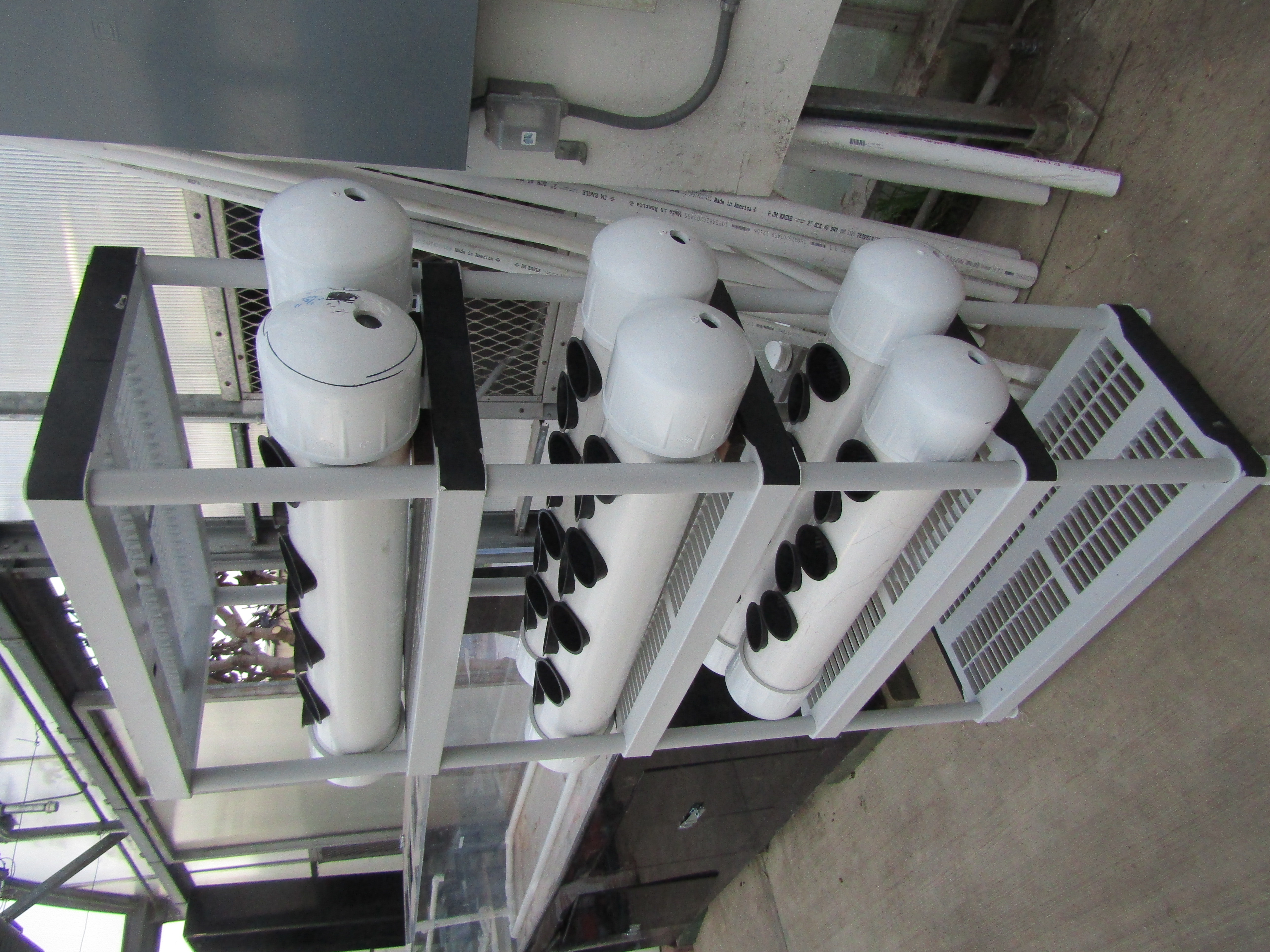 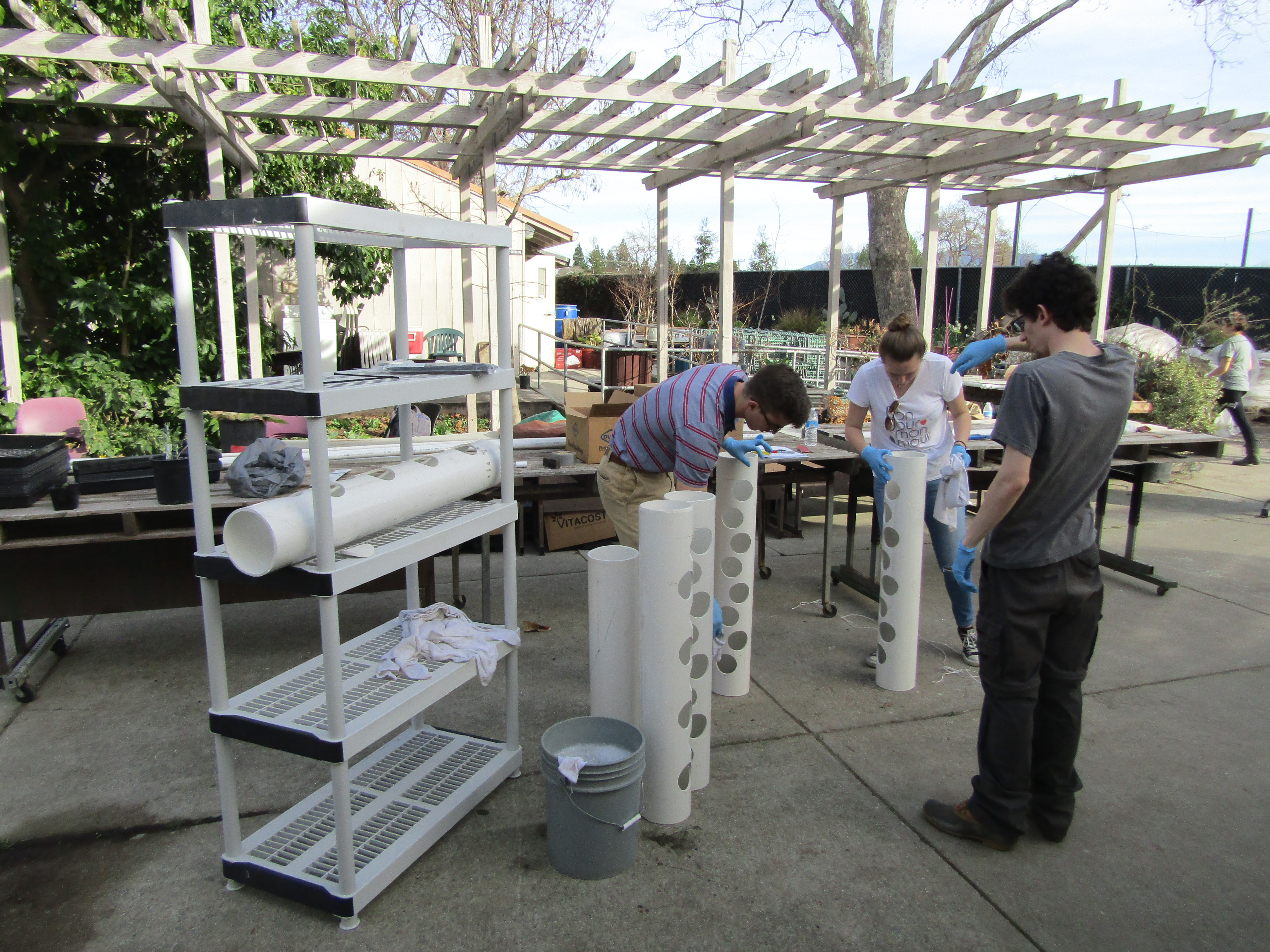 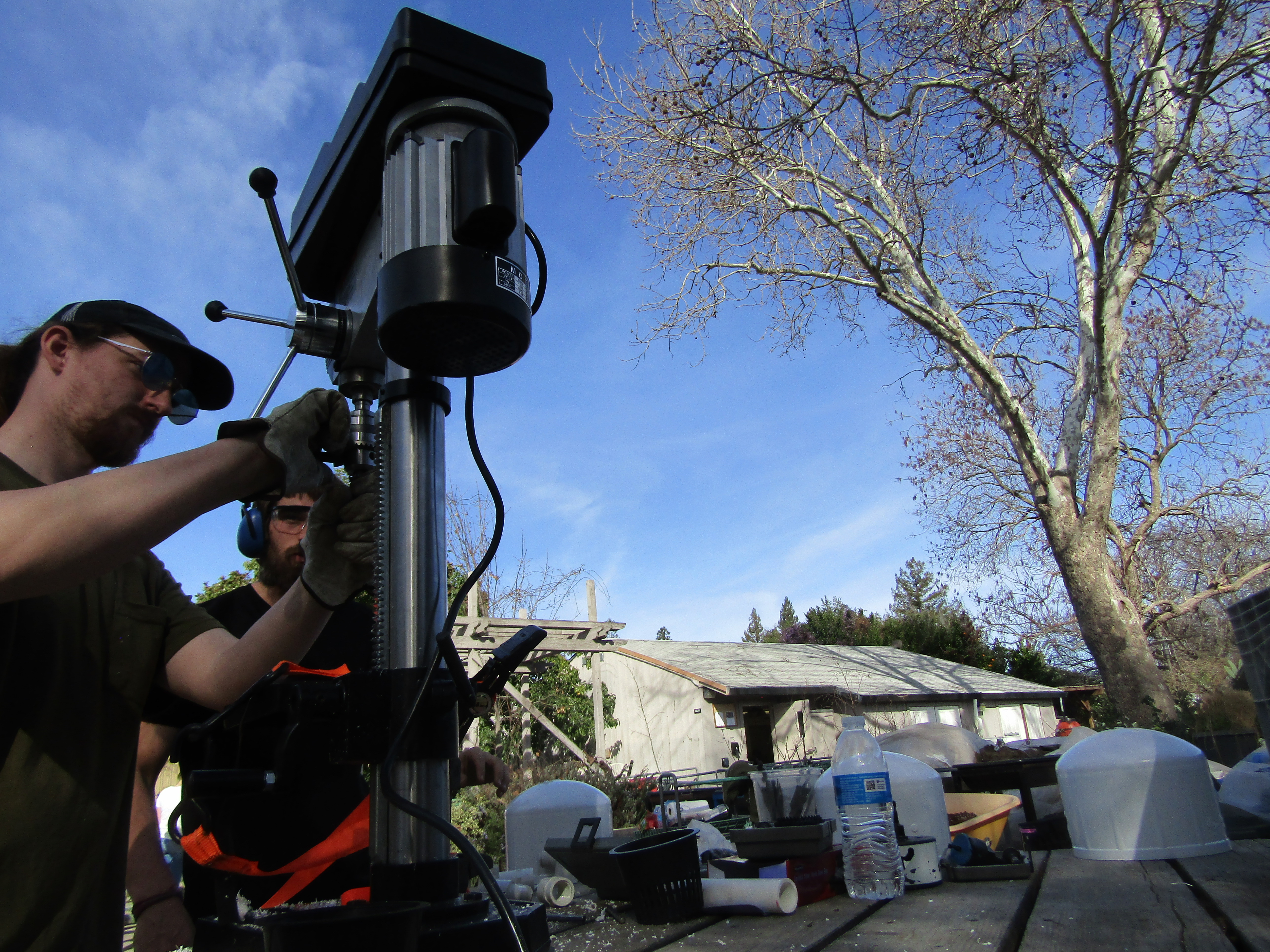 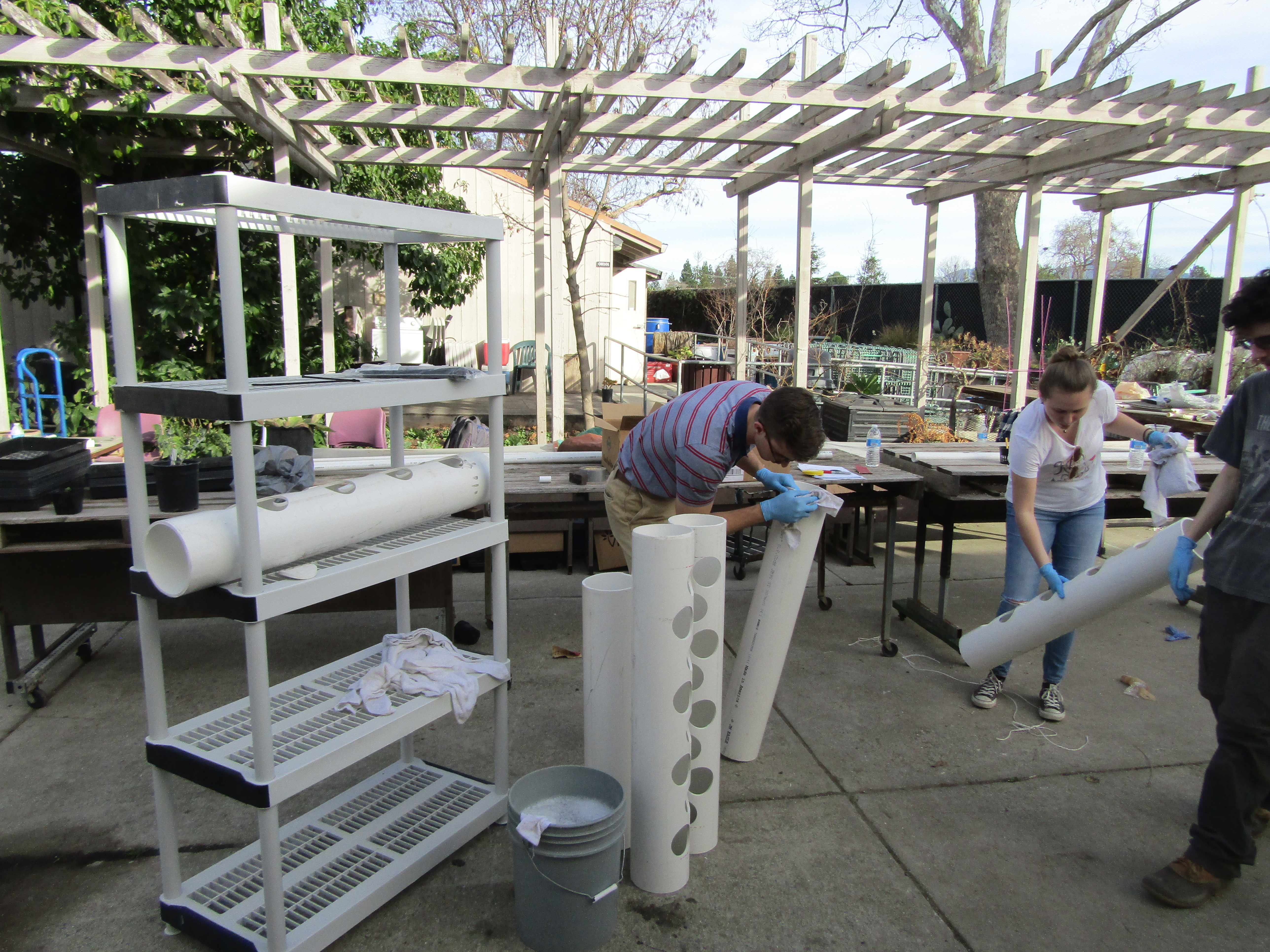 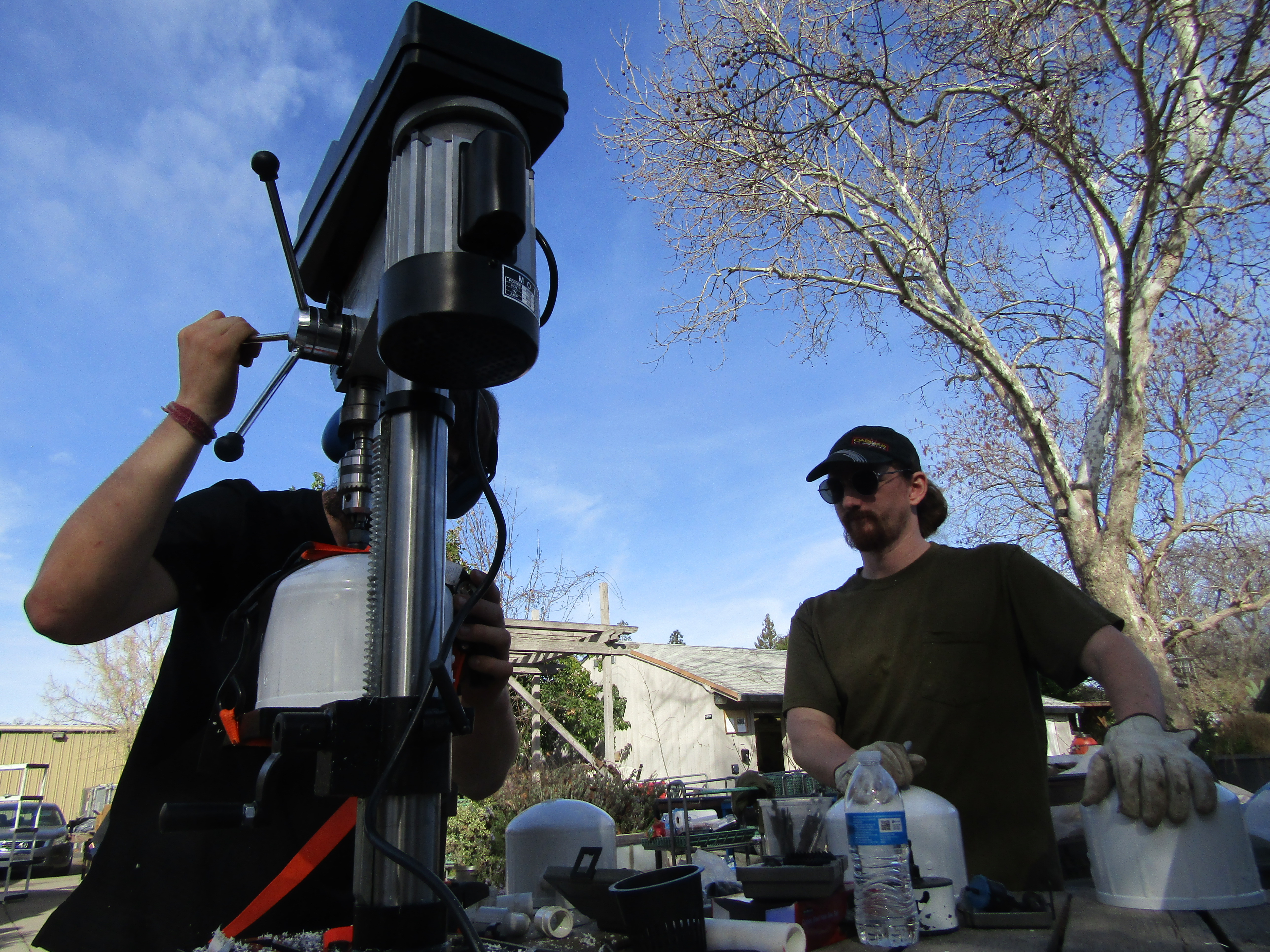 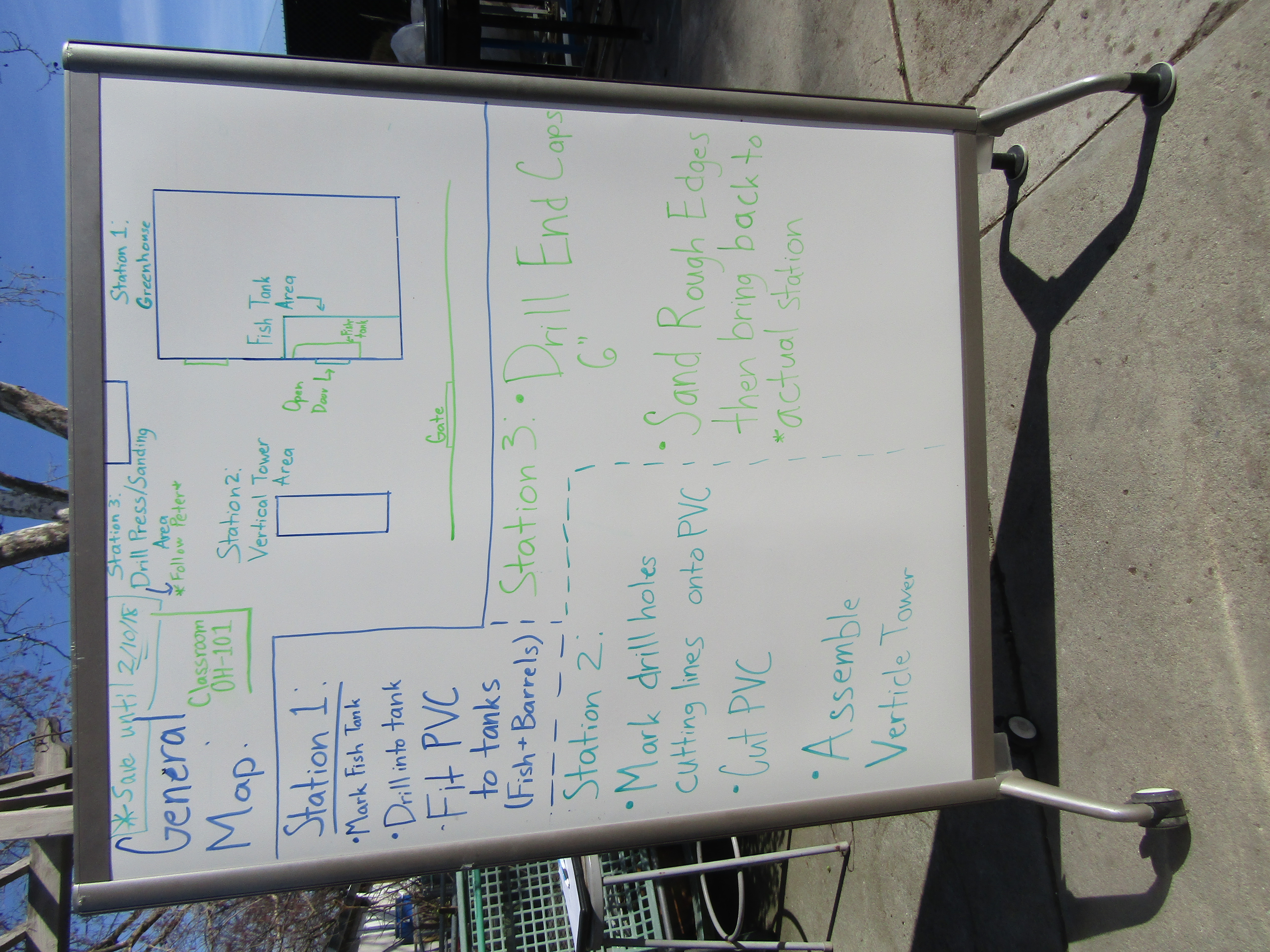 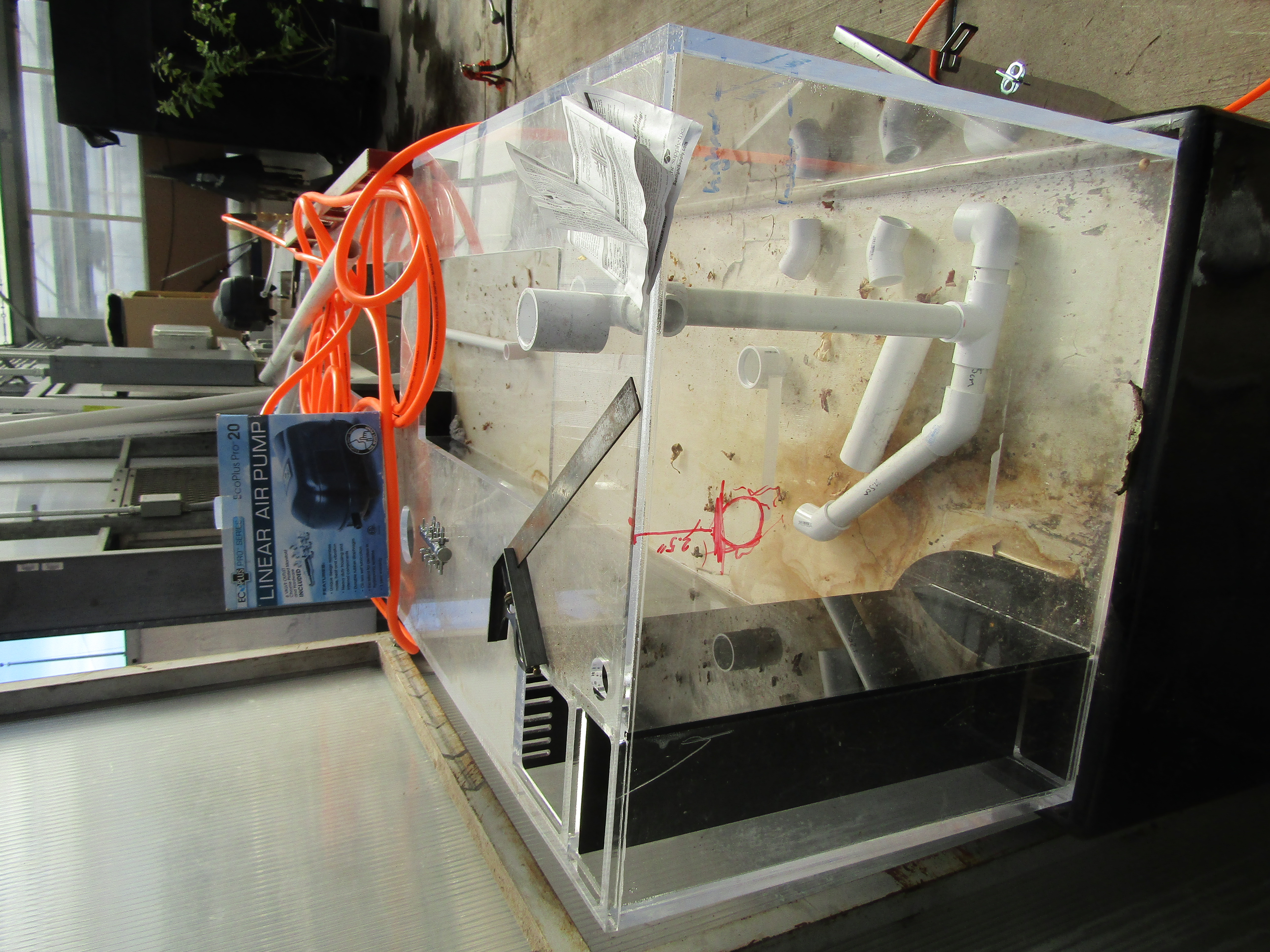 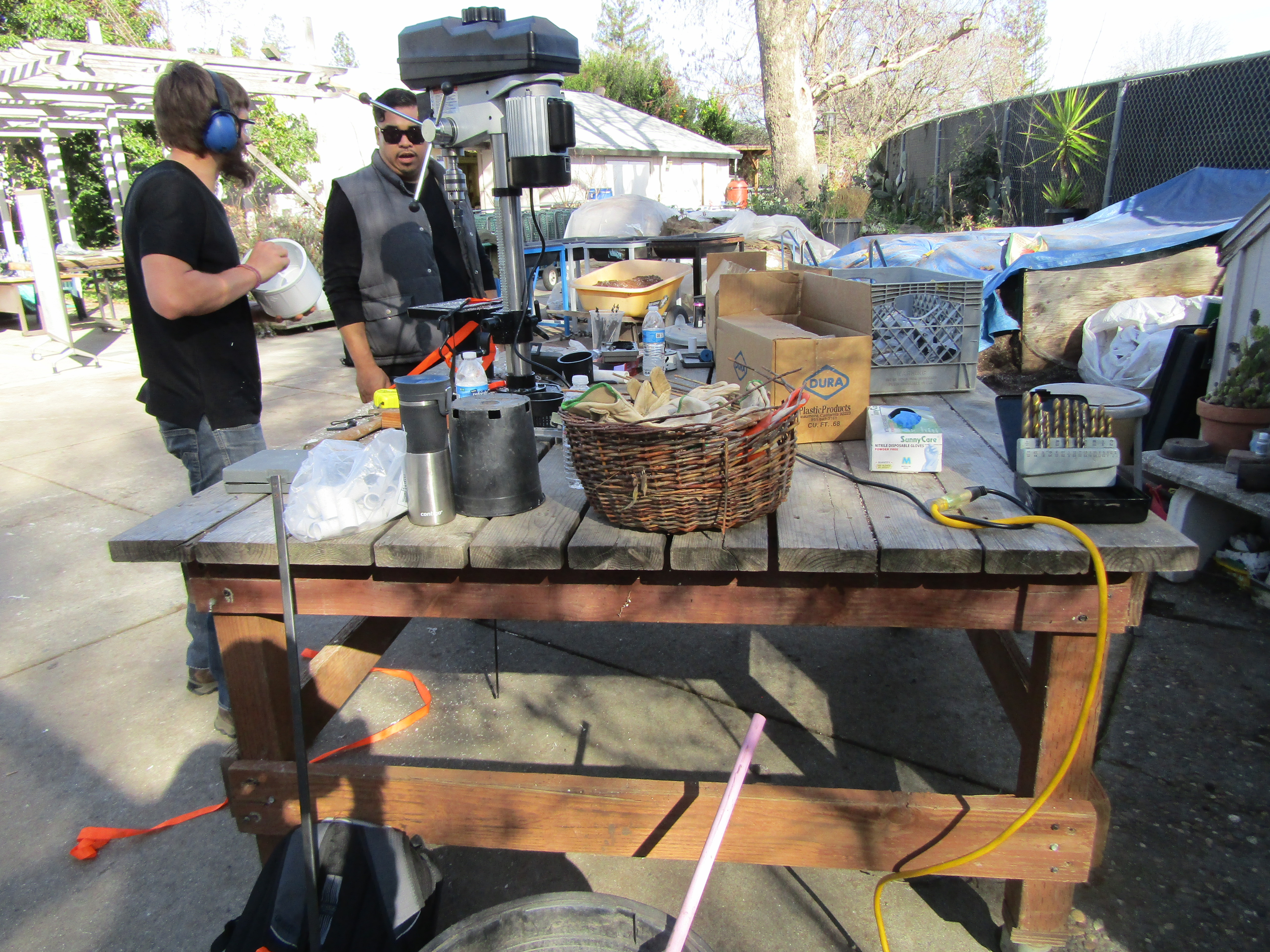 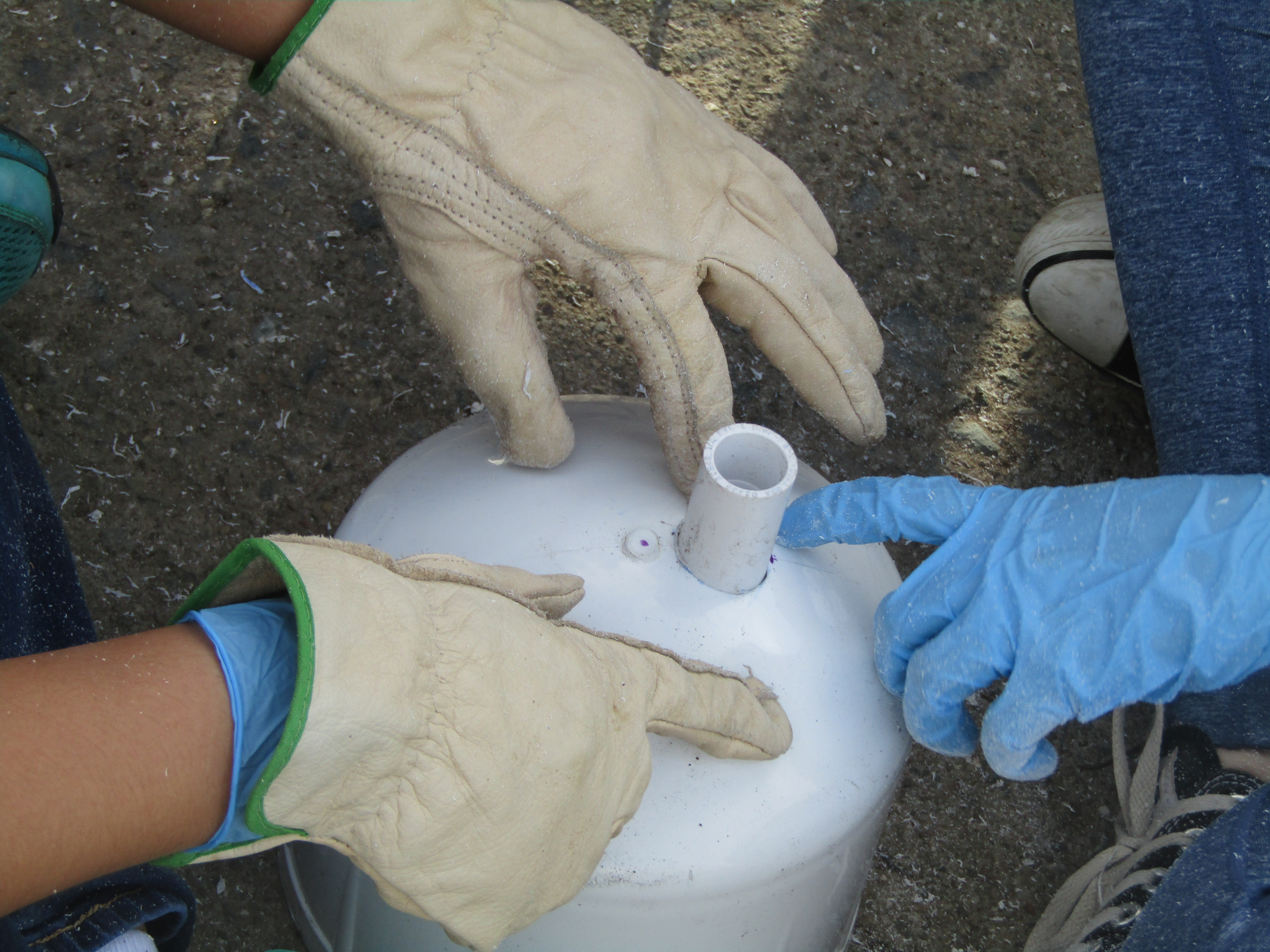 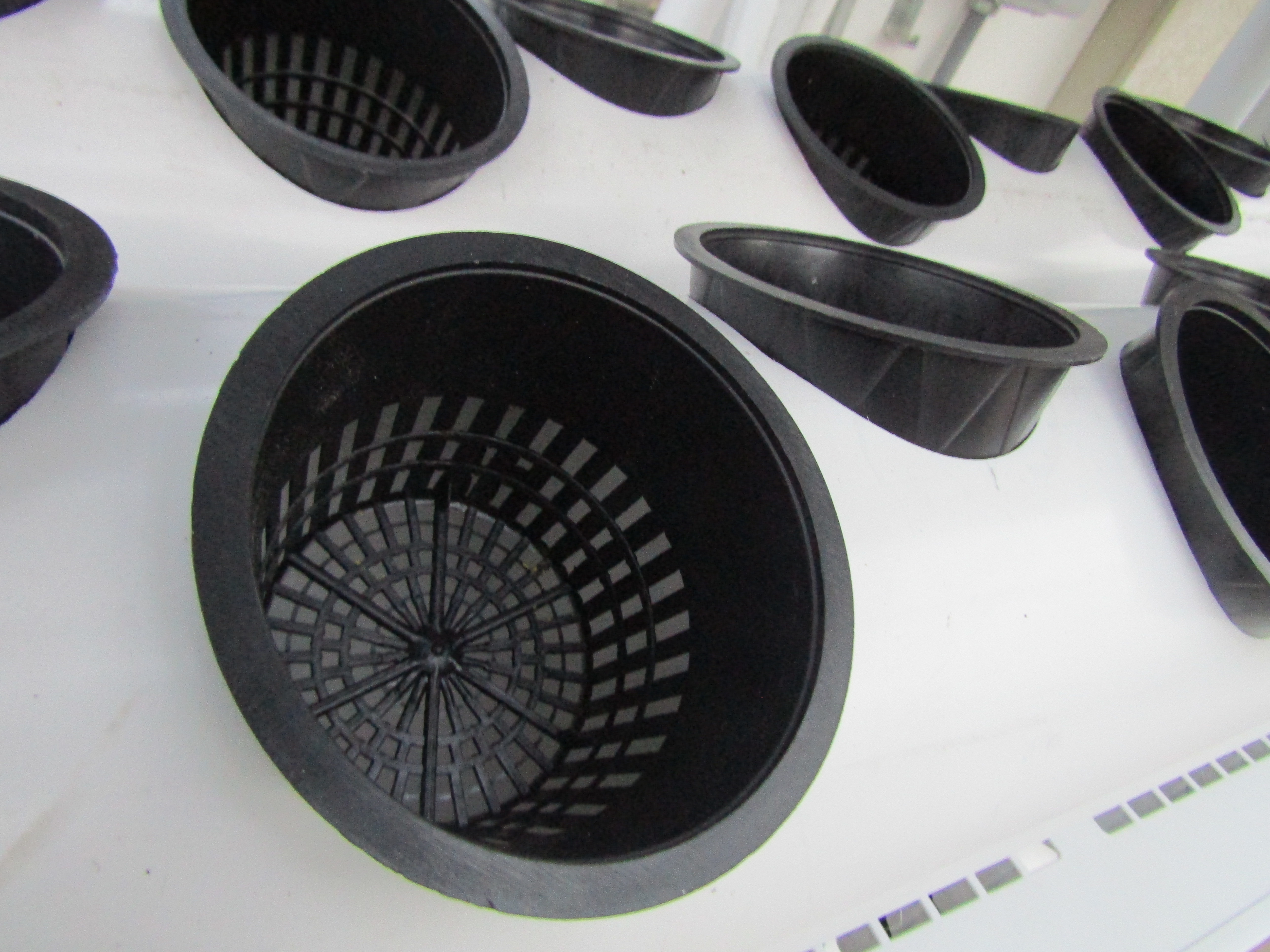 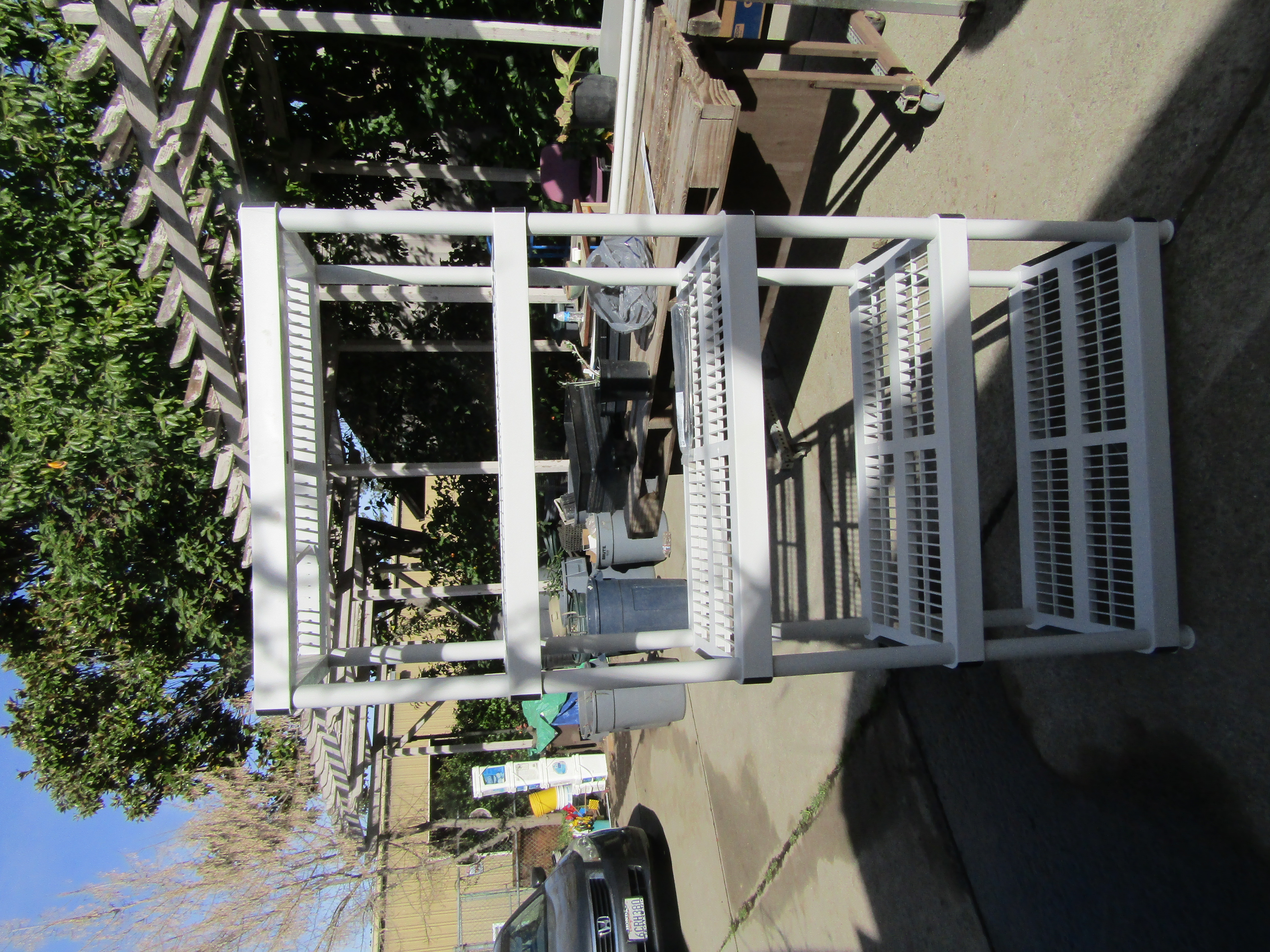 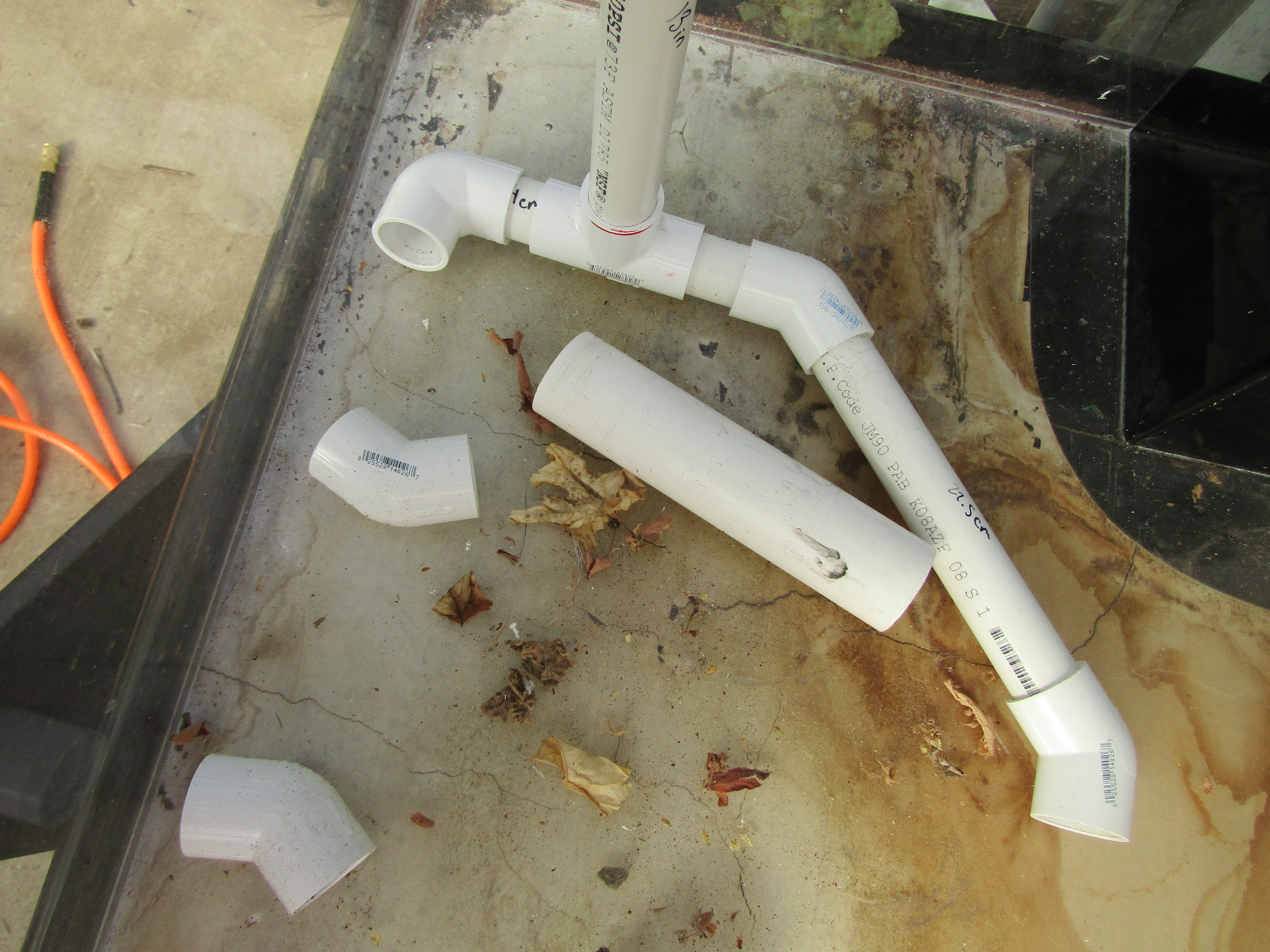 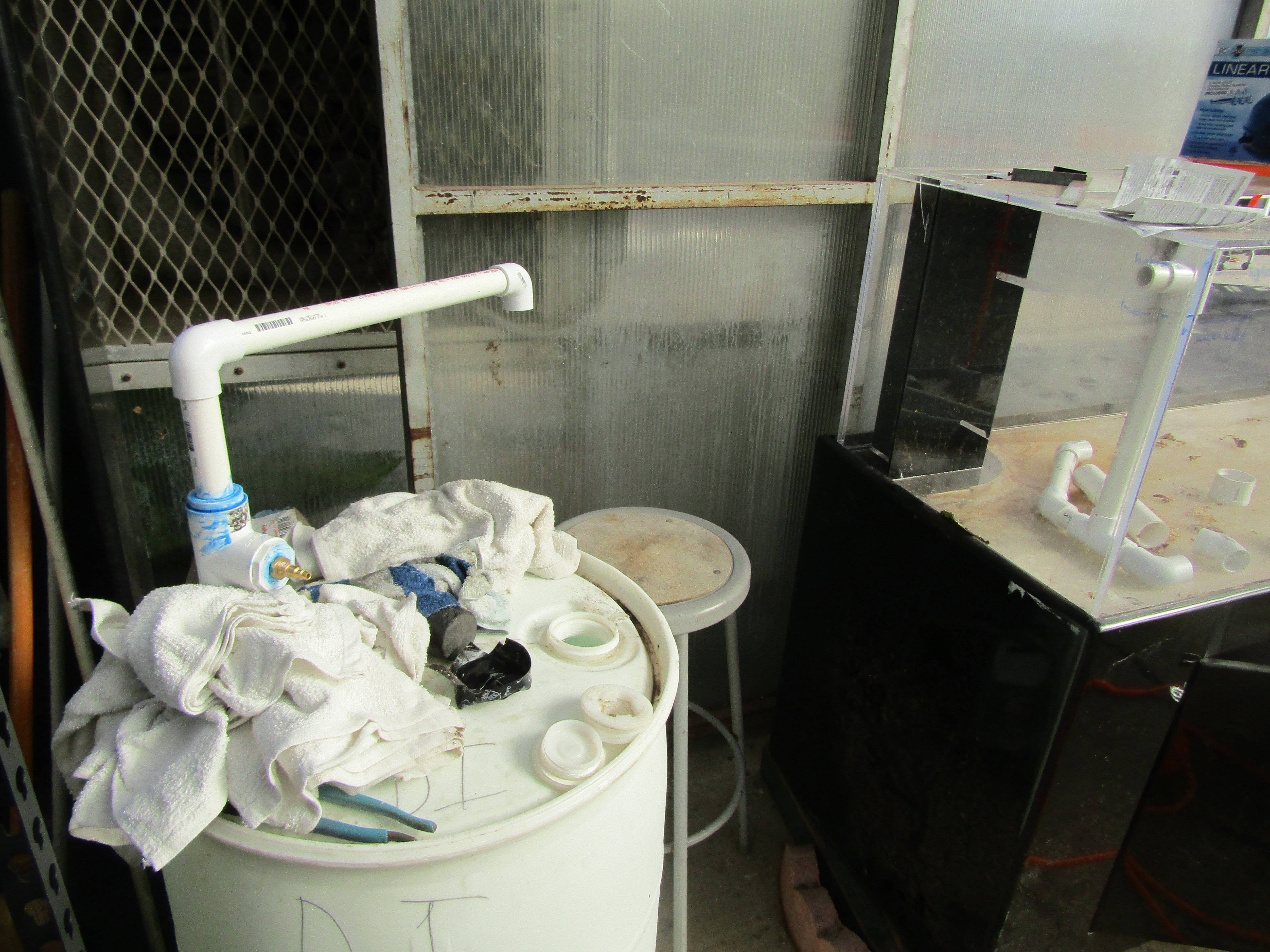 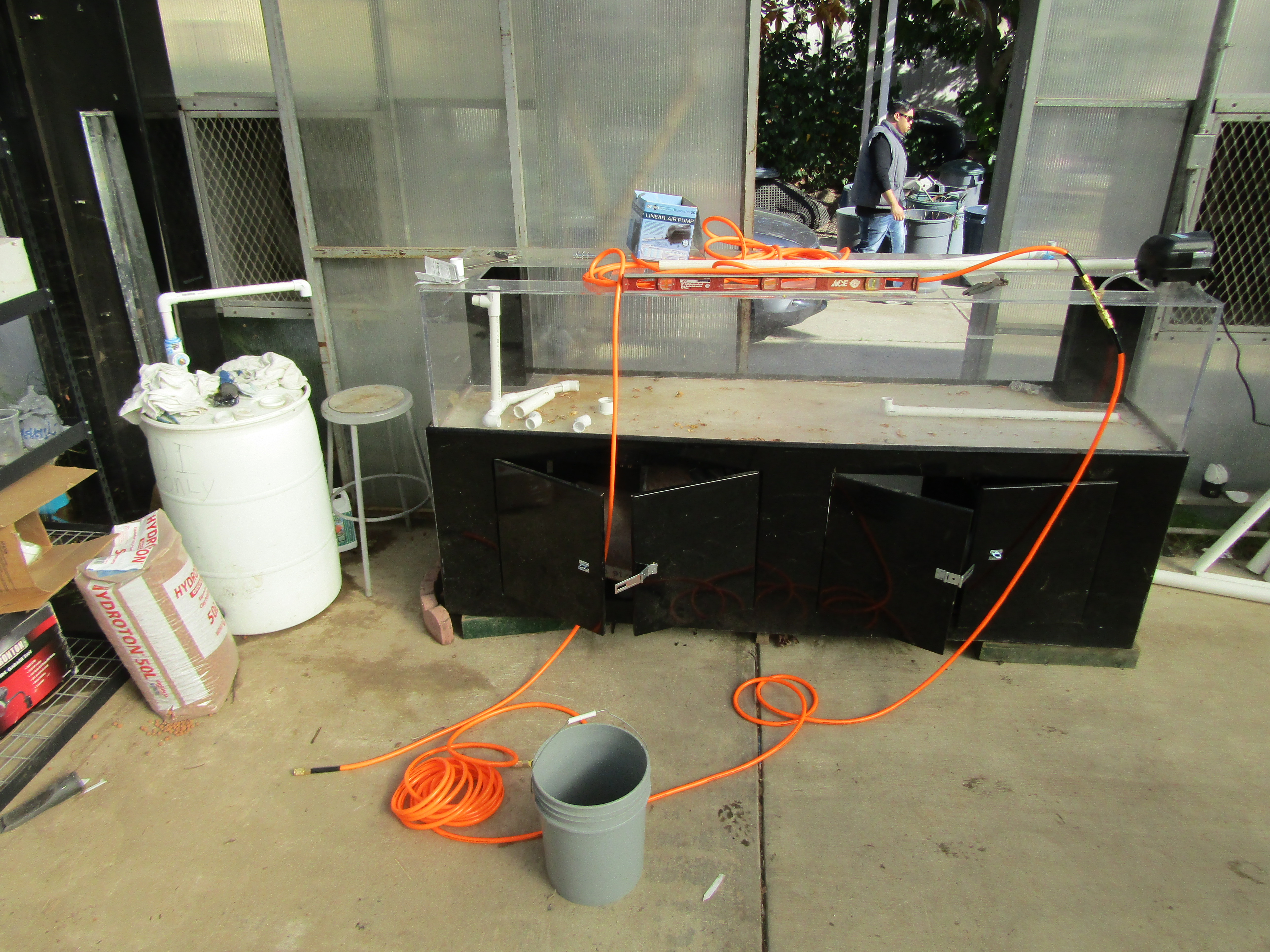 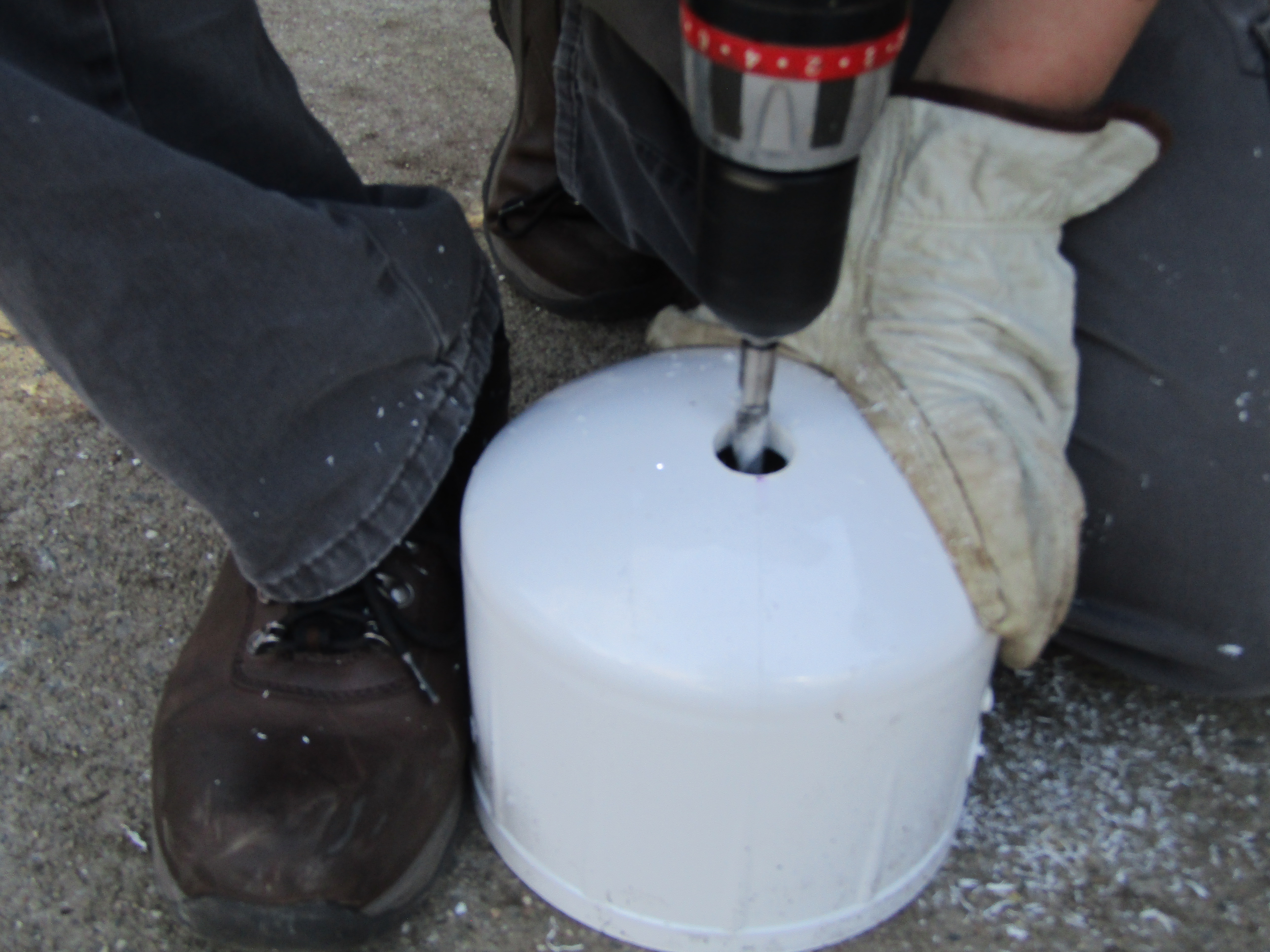 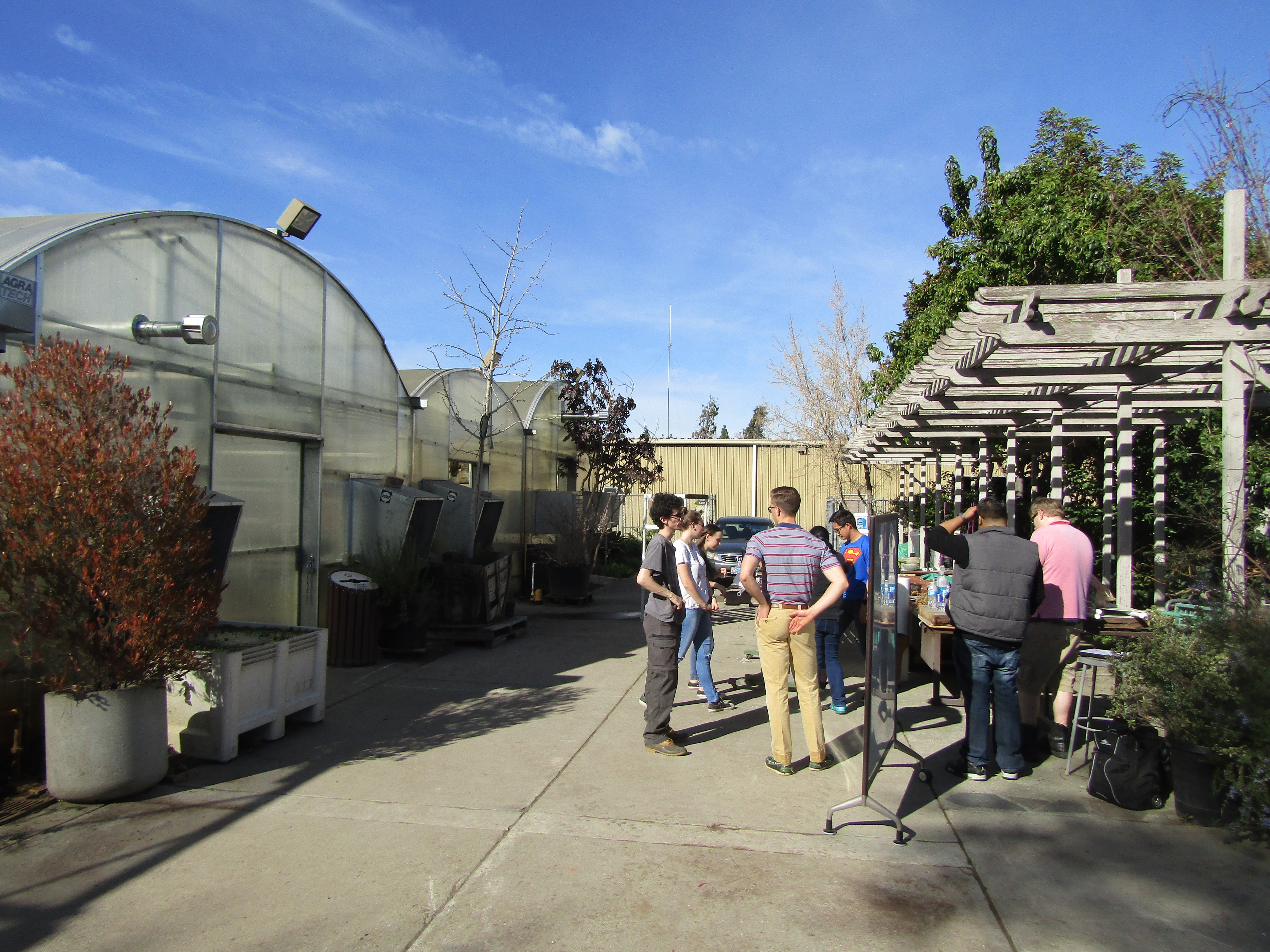 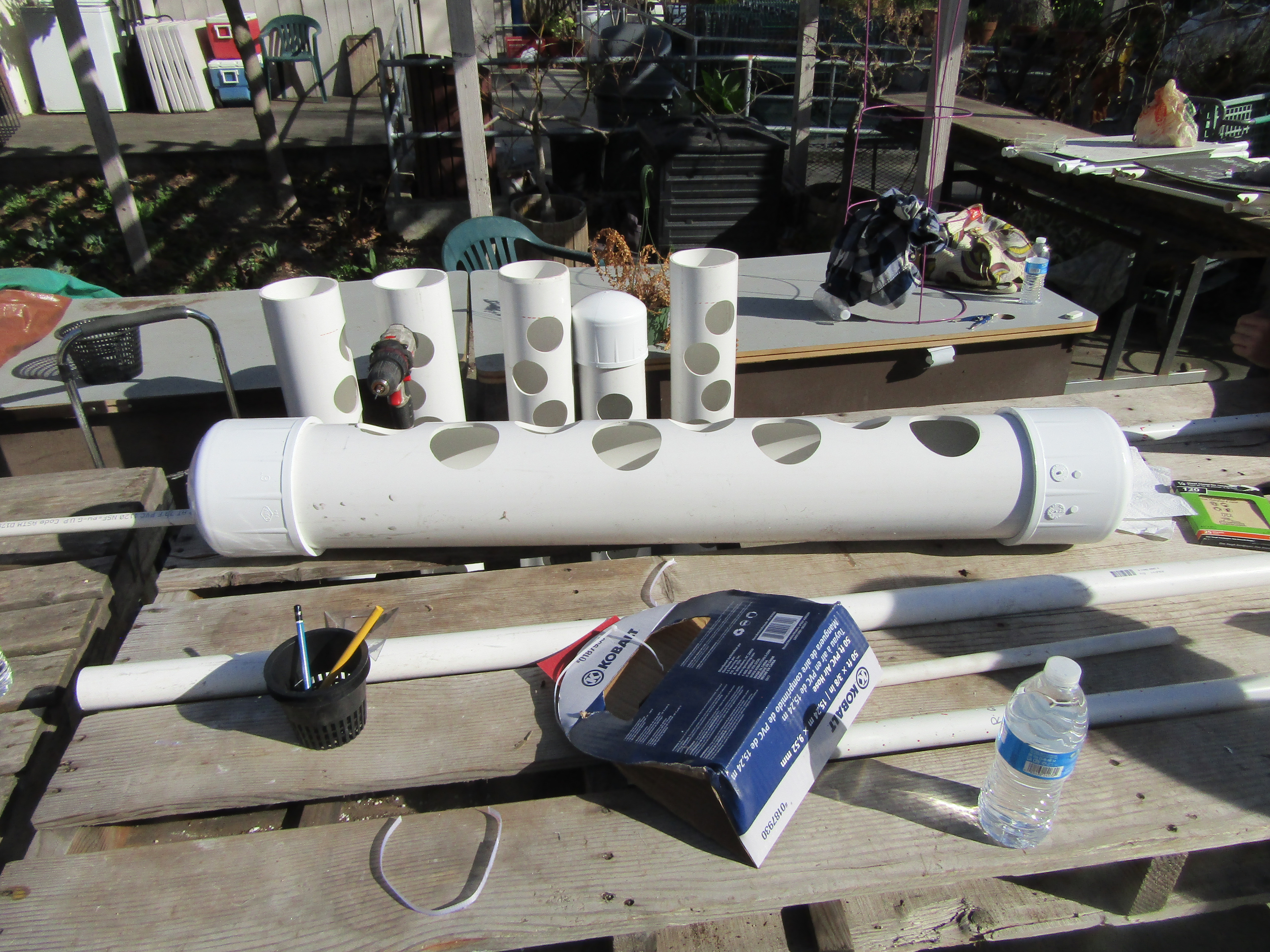 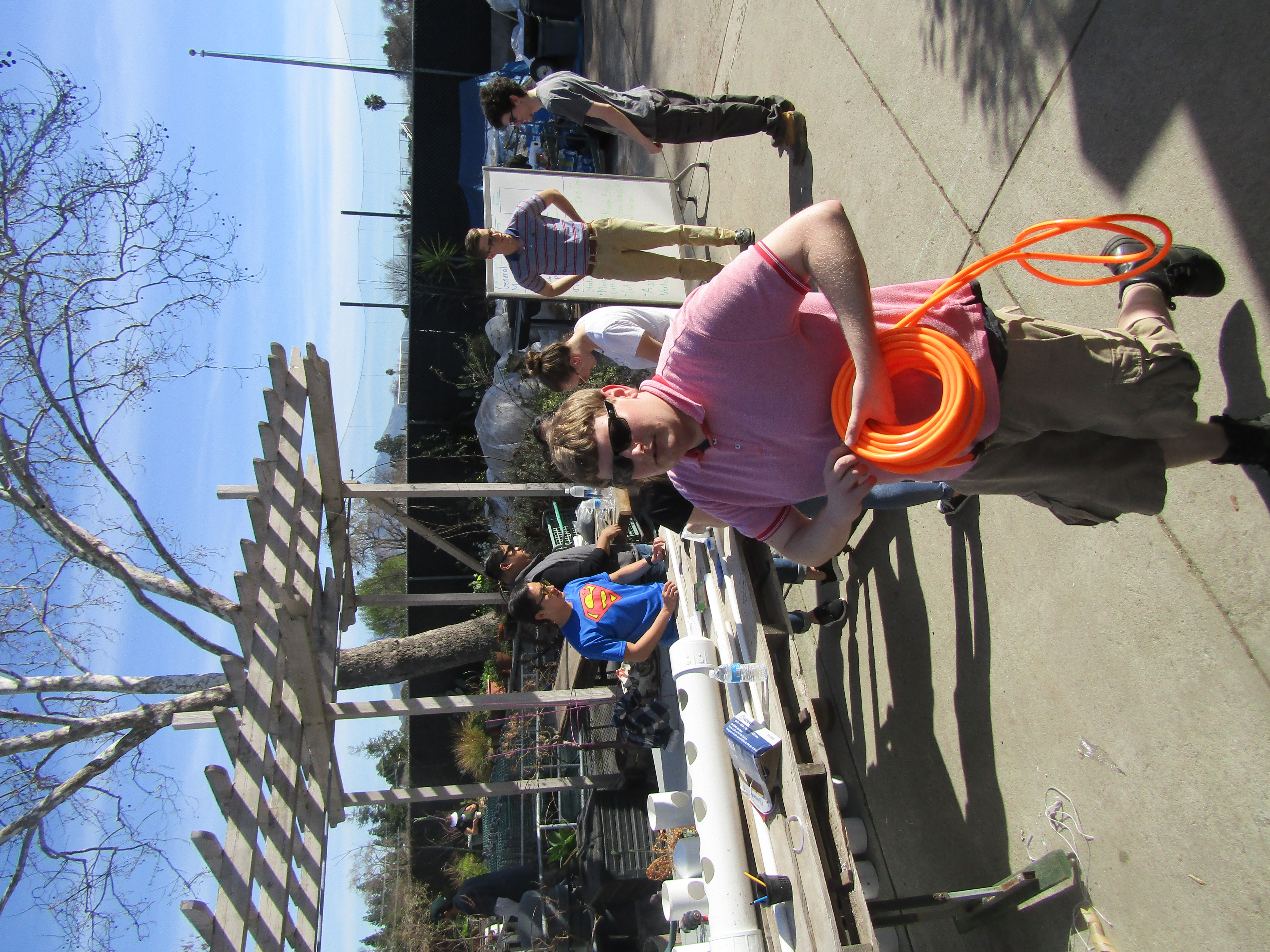 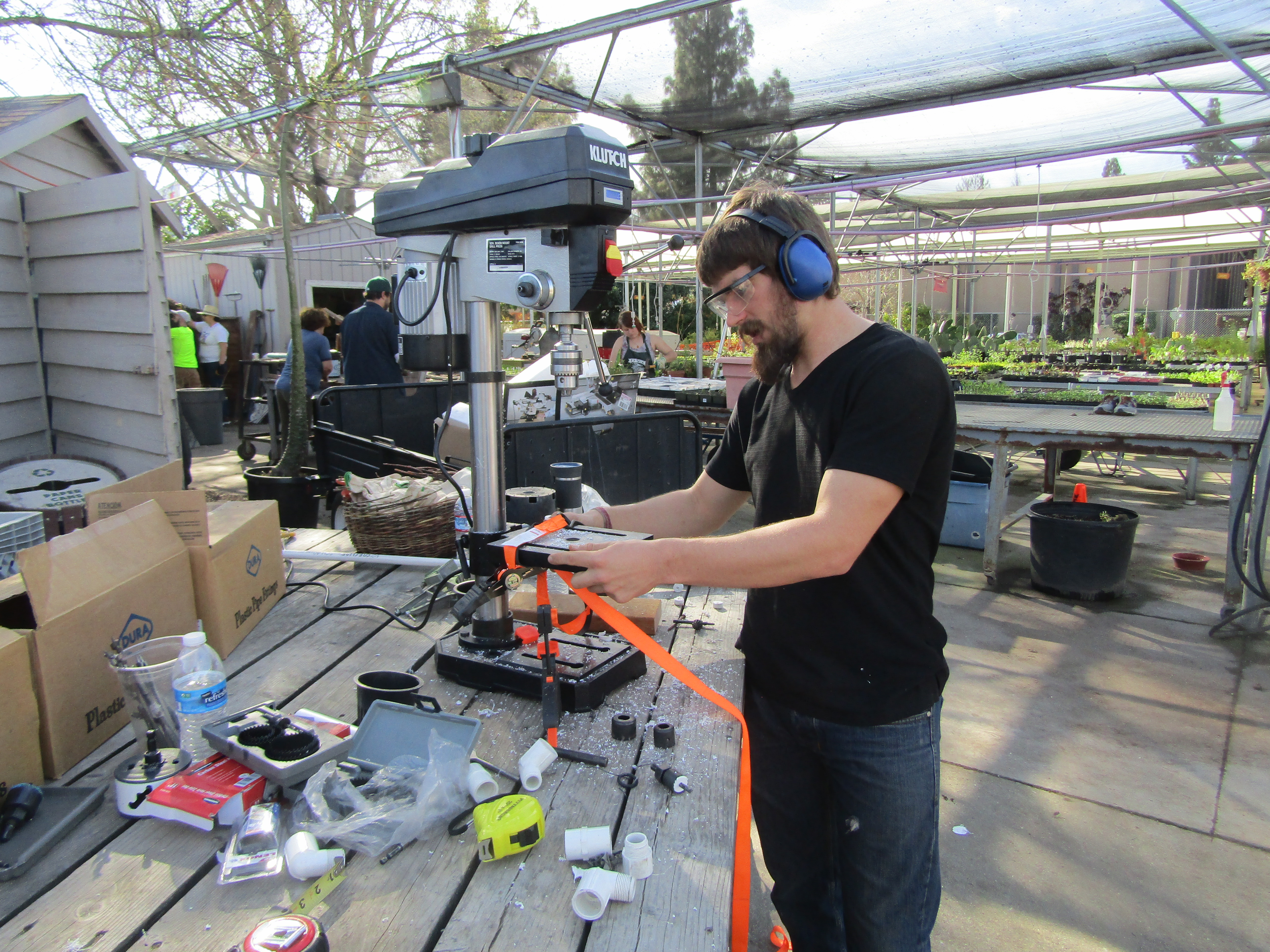 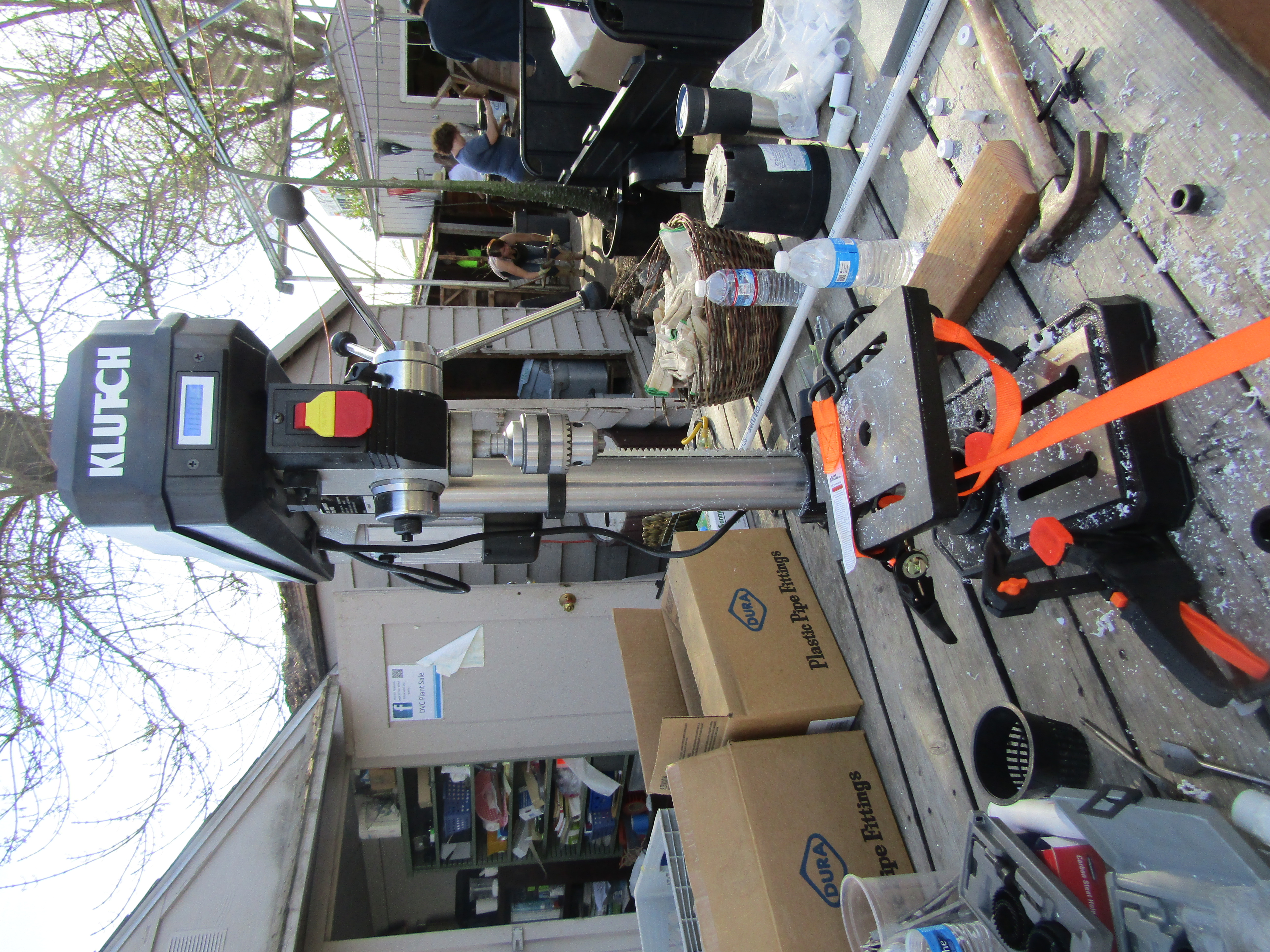 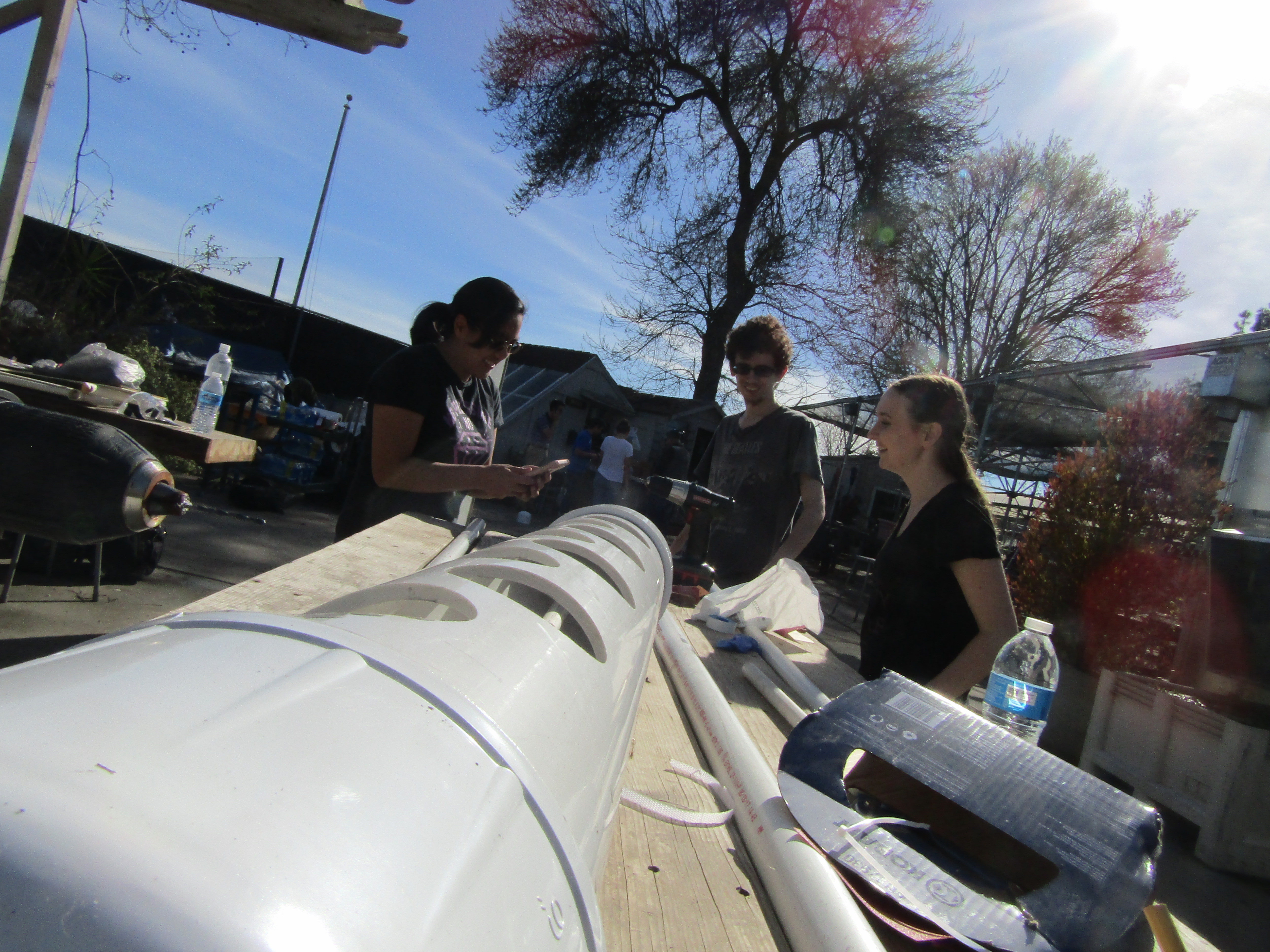 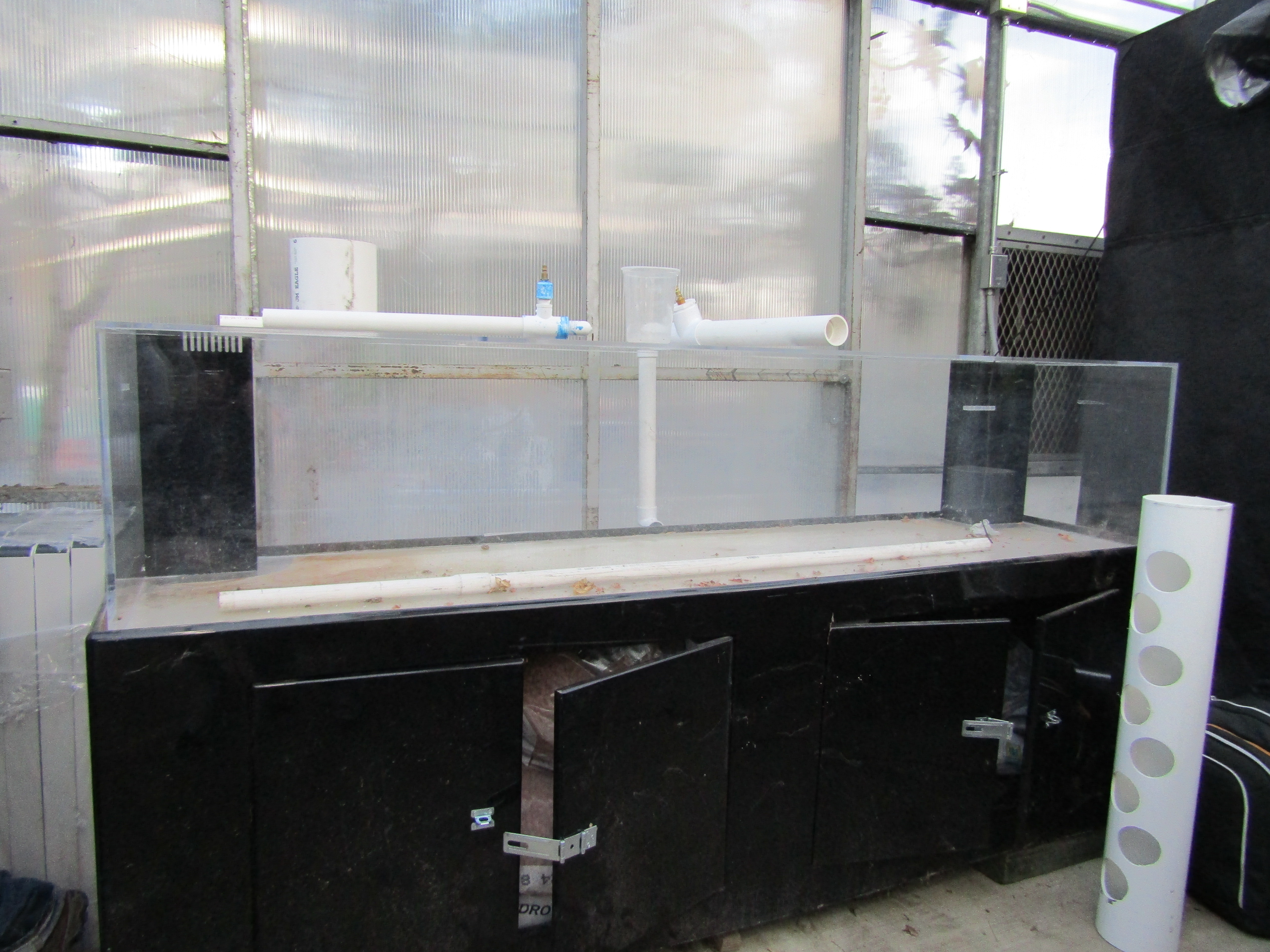 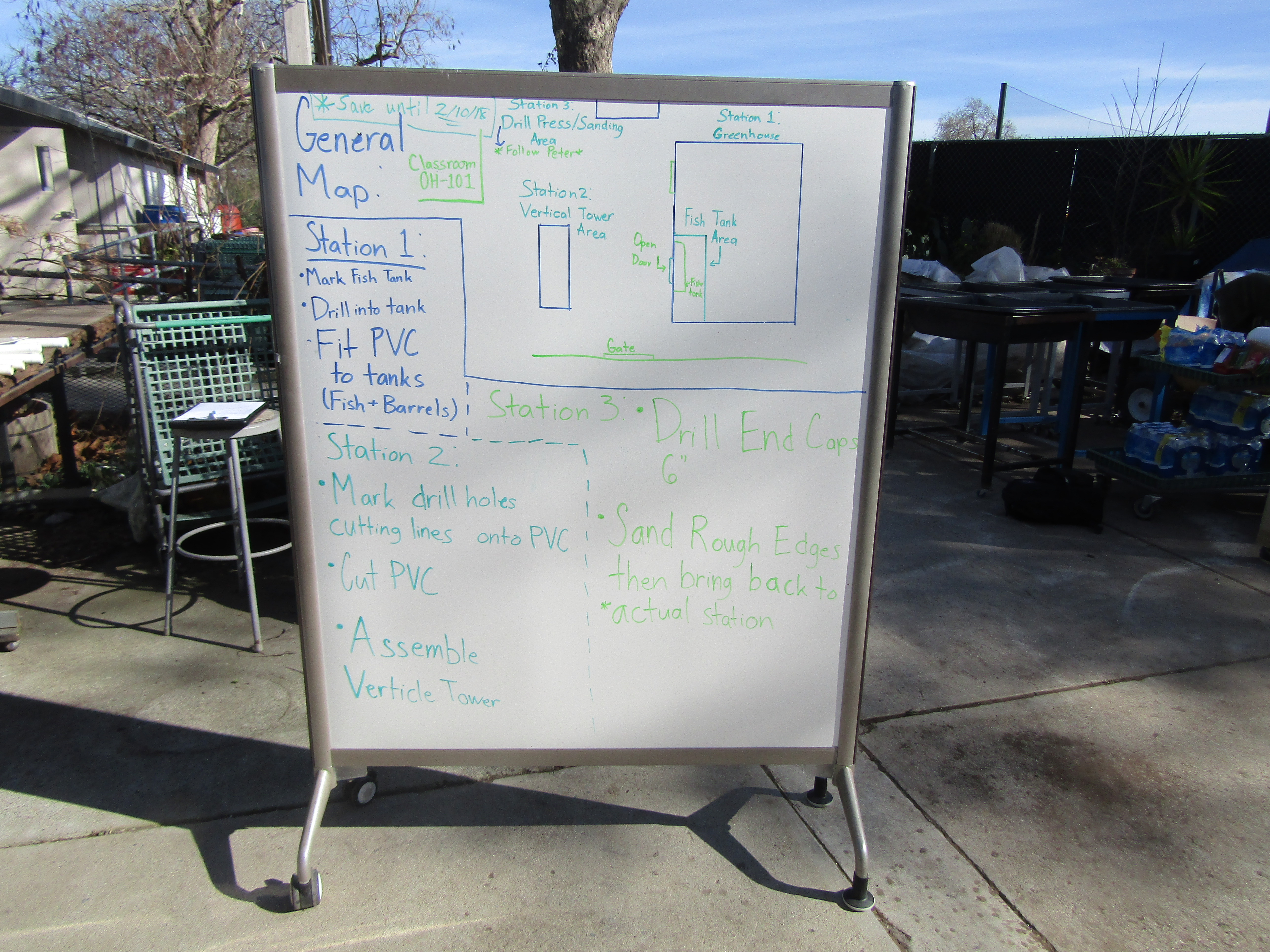 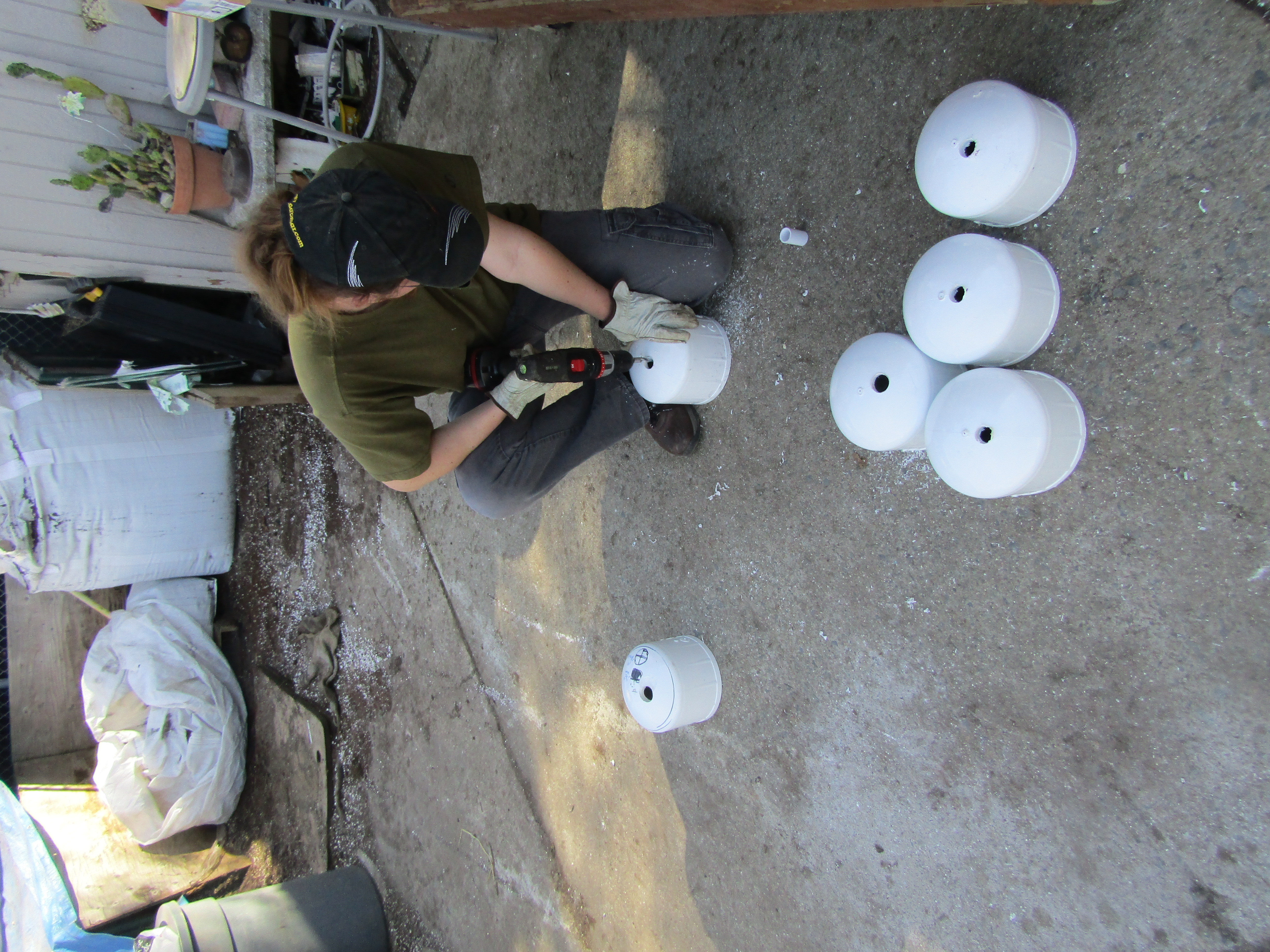 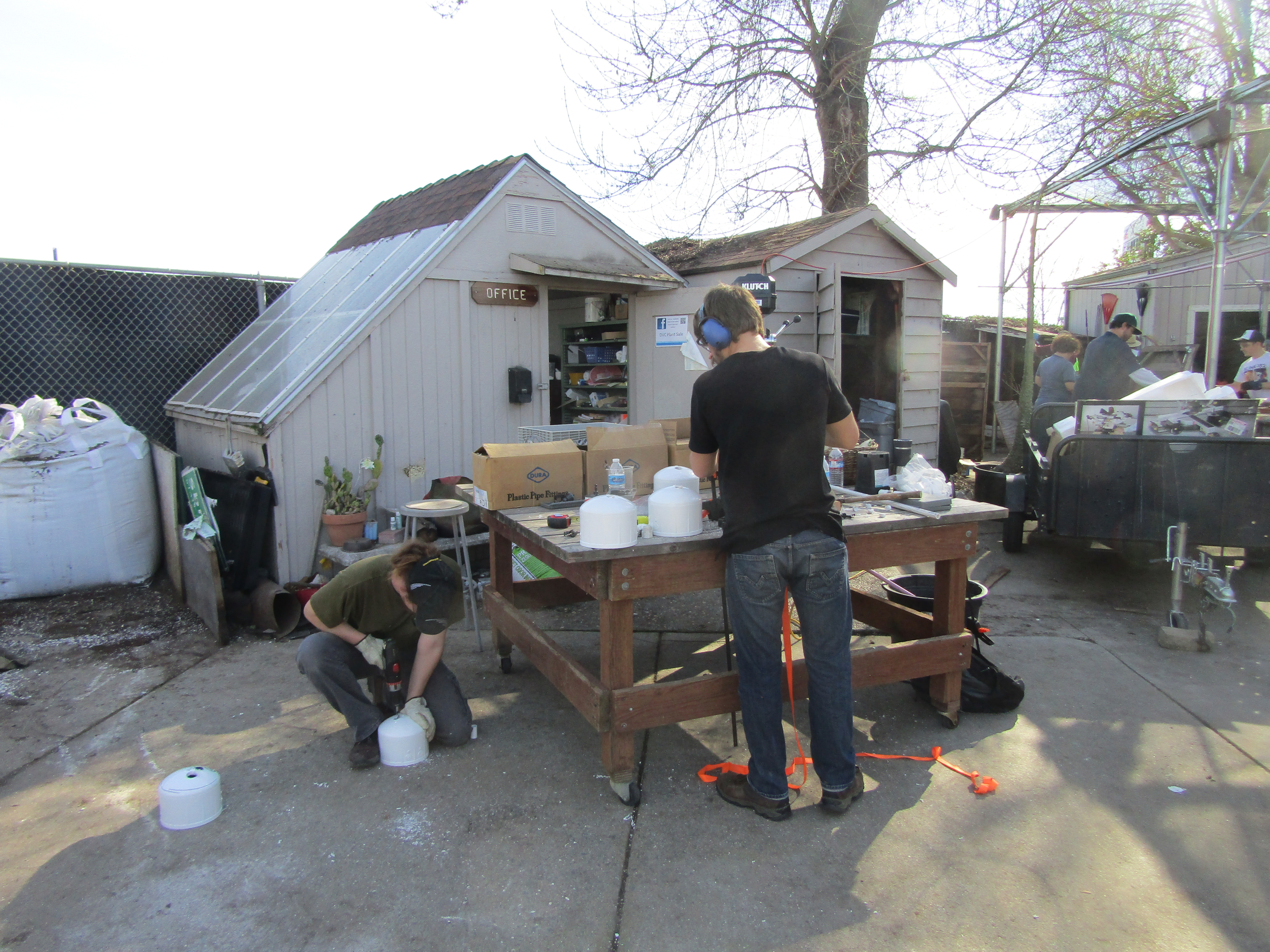