Balanced chemical equations are used in much the same fashion to determine the amount of one reactant required to react with a given amount of another reactant, or to yield a given amount of product, and so forth. The coefficients in the balanced equation are used to derive stoichiometric factors (mole bridges) that permit computation of the desired quantity. To illustrate this idea, consider the production of ammonia by reaction of hydrogen and nitrogen:

Referring to the balanced chemical equation, the stoichiometric factor (mole bridge) relating the two substances of interest is \(\ce{\dfrac{3\: mol\: I2}{2\: mol\: Al}}\). The molar amount of iodine is derived by multiplying the provided molar amount of aluminum by this factor: 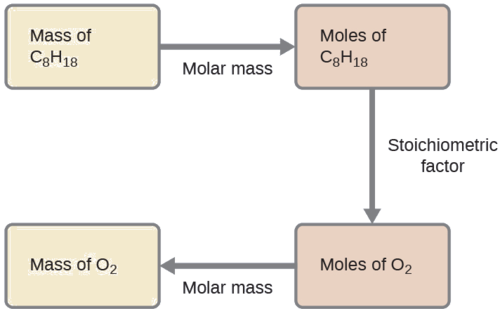 Since a chemical formula is the mole ratios of elements when they combine, if we are given the mass of the elements that reacted with each other, we should be able to figure the moles from this, and then the ratios.

Step 1: Determine the number of moles of an element which reacted. In this case, Cu.

Step 2: Determine the number of moles of the other element which reacted. In this case, Cl.

Step 3: Make a ratio of moles one element in a compound to moles of the other element in the compound (as a general rule, the larger number will go on top of the ratio.) Since we are trying to find the formula of copper chloride, we would use moles copper to and moles chlorine.