A successful protein purification procedure can be nothing short of amazing. Whether you are starting off with a recombinant protein which is produced in E. coli, or trying to isolate a protein from some mammalian tissue, you are typically starting with gram quantities of a complex mixture of protein, nucleic acids, polysaccharide, etc. from which you may have to extract milligram (or microgram!) quantities of desired protein at high purity, and hopefully with high yield.

Antibodies can be used in a method called Western blotting, which is useful for determining levels of protein expression and for assaying proteins during purification. This method usually involves the following steps:

In a variation of the above, the protein sample may be blotted directly on a nitrocellulose paper (called a dot blot) without first running a gel. This may be desirable if, for example, the antibody is monoclonal and recognizes an epitope which is dependent upon native structure (which would be destroyed upon running an SDS PAGE).

In addition to their varied uses, antibodies can also be used to purify proteins.

Protein purification can be thought of as a series of fractionation steps designed so that:

During purification you will need to monitor several parameters, including:

This basic information will allow you to keep track of the following information during each step of purification: Usually the initial steps in purification make use of general physical and/or chemical differences between soluble proteins and other cell components.

Nucleic acids can sometimes be readily removed from the sample by the addition of large cationic compounds such as polyethylene imine, or streptomycin sulfate.

Crude fractionations of proteins can be achieved by adding various quantitites of precipitants such as ammonium sulfate, or polyethylene glycol (PEG). Figure 4.1.2: Protein activity as a function of precipitant concentration

After initial fractionation steps the typical procedure is to move to column chromatography. Note that after ion exchange chromatography the protein of interest will be in a buffer with a potentially high salt concentration. This must be taken into account before proceeding with the next step in the purification scheme We have a 10ml protein sample from an ion exchange column elution pool which contains 1.0M NaCl. For our next step in the purification we can have no more than 1mM NaCl in the sample.

Thus, instead of making 10 L of buffer, we could make only 620 ml and achieve the same results with two dialysis steps

For both dialysis and concentration, it is essential that the membrane does not interact with the protein (i.e. has no affinity for, and will not bind, the protein)

Gel filtration does not rely on any chemical interaction with the protein, rather it is based on a physical property of the protein - that being the effective molecular radius (which relates to mass for most typical globular proteins). Where will a protein elute in a gel filtration experiment? 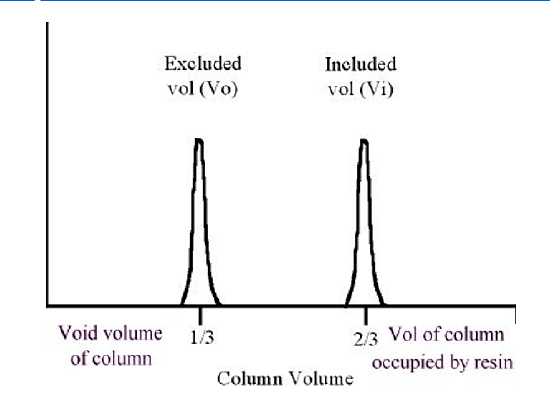 Affinity chromatography is a general term which applies to a wide range of chromatographic media. It can be basically thought of as some inert resin to which has been attached some compound which has a specific affinity for your protein of interest.

Other methods of elution include changing the buffer conditions such that the protein is no longer in the native state (since it is the native state which confers the structure required for the specific binding interaction). This can be achieved by changing pH or by adding denaturing agents such as urea or guanidine.

With affinity chromatography, typically the purification achieved in a single step can be dramatic - on the order of several thousand fold. Single step purifications with specific affinity columns are not unheard - in fact it is an ideal goal of purification - a matrix which recognizes only the protein of interest and none other.

Hydrophobic resins contain a non-polar functional group, such as an alkane or aromatic group.

The steps in preparing a chromatographic resin typically involve:

Chromatography systems may be run using only gravity and a beaker to collect the appropriate fraction. Most common systems, however, will include the following: Note that the bottom of the safety loop is lower than the outlet to the fraction collector. 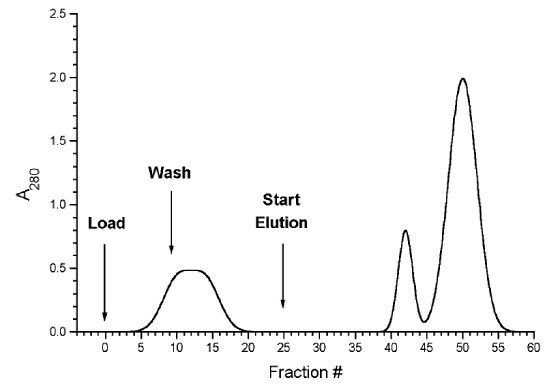 The following events took place during this chromatography run:

1. Note the tick marks on the chromatogram.

3. Sometime during fraction 5 we begin to notice the absorbence of the column effluent increasing

4. Obviously, some material is not binding to the resin during the loading step. This is the flow-through. Is this some component of the sample which does not have affinity for the resin, or, does it represent that we have exceeded the capacity of the resin?

5. Around fraction 9 we begin to wash the column

6. Around fraction 14 we note the A280 begins to decrease

7. After the A280 comes back down to baseline we begin our elution protocol. In this particular experiment we will use a linear gradient of increasing salt (NaCl) concentration (in wash buffer) to compete off the material bound to the ion exchange resin.

9. Is there any material left on the column? The integrated areas (i.e. summing the A280's of each fraction in a pool) of the flow-through, peak 1 and peak 2 are as follows

Usually, you will probably be pooling fractions in such a way as to maximize the recovery of your protein of interest. However, you always have the option of pooling to increase purity, and if you have lots of protein to work with this may allow you to achieve the desired purity with fewer steps. Here's an example of how it's done: How do you know when you are finished purifying a protein?

Also, each step of the purification should be monitored by gel electrophoresis.

The following chart represents the typical data one would monitor during a purification: