Two or more amino acids can join together into chains called peptides. Previously, we discussed the reaction between ammonia and a carboxylic acid to form an amide. In a similar reaction, the amino group on one amino acid molecule reacts with the carboxyl group on another, releasing a molecule of water and forming an amide linkage:

An amide bond joining two amino acid units is called a peptide bond. Note that the product molecule still has a reactive amino group on the left and a reactive carboxyl group on the right. These can react with additional amino acids to lengthen the peptide. The process can continue until thousands of units have joined, resulting in large proteins.

A chain consisting of only two amino acid units is called a dipeptide; a chain consisting of three is a tripeptide. By convention, peptide and protein structures are depicted with the amino acid whose amino group is free (the N-terminal end) on the left and the amino acid with a free carboxyl group (the C-terminal end) to the right. Notice that a proton transfer also can occur between the C-terminal and the N-terminal resulting in the corresponding -NH3+ and -COO- charged groups:

The general term peptide refers to an amino acid chain of unspecified length. However, chains of about 50 amino acids or more are usually called proteins or polypeptides. In its physiologically active form, a protein may be composed of one or more polypeptide chains.

For peptides and proteins to be physiologically active, it is not enough that they incorporate certain amounts of specific amino acids. The order, or sequence, in which the amino acids are connected is also of critical importance. Bradykinin is a nine-amino acid peptide (Figure \(\PageIndex{1}\)) produced in the blood that has the following amino acid sequence:

the peptide resulting from this synthesis shows none of the activity of bradykinin.

Just as millions of different words are spelled with our 26-letter English alphabet, millions of different proteins are made with the 20 common amino acids. However, just as the English alphabet can be used to write gibberish, amino acids can be put together in the wrong sequence to produce nonfunctional proteins. Although the correct sequence is ordinarily of utmost importance, it is not always absolutely required. Just as you can sometimes make sense of incorrectly spelled English words, a protein with a small percentage of “incorrect” amino acids may continue to function. However, it rarely functions as well as a protein having the correct sequence. There are also instances in which seemingly minor errors of sequence have disastrous effects. For example, in some people, every molecule of hemoglobin (a protein in the blood that transports oxygen) has a single incorrect amino acid unit out of about 300 (a single valine replaces a glutamic acid). That “minor” error is responsible for sickle cell anemia, an inherited condition that usually is fatal.

Vasopressin is released from the pituitary gland and causes the kidneys to reabsorb solute-free water, thus regulating the tonicity of the body fluids.  Vasopressin may also raise blood pressure by inducing moderate vasoconstriction.

Oxytocin is a peptide hormone and neuropeptide produced in the hypothalamus and released by the posterior pituitary. It plays a role in social bonding, reproduction, childbirth, and lactation. Oxytocin is released into the bloodstream as a hormone in response to love and during labor. This helps with uterus contraction during childbirth and milk production by stimulating the mammary glands. Oxytocin is used to induce labor. 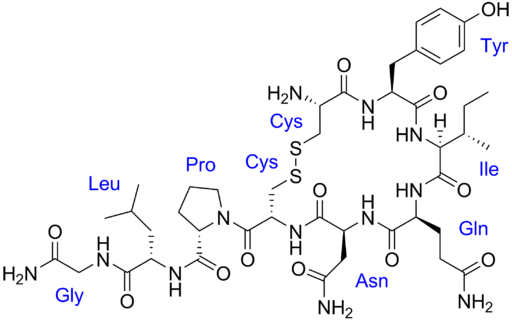