Most reactions involving neutral molecules cannot take place at all until they have acquired the energy needed to stretch, bend, or otherwise distort one or more bonds. This critical energy is known as the activation energy of the reaction. Activation energy diagrams of the kind shown below plot the total energy input to a reaction system as it proceeds from reactants to products. 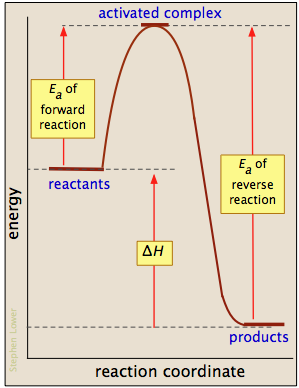 In examining such diagrams, take special note of the following:

Activation energy diagrams can describe both exothermic and endothermic reactions:

The activation energies of the forward reactions can be large, small, or zero (independently, of course, of the value of ΔH):

Processes with zero activation energy most commonly involve the combination of oppositely-charged ions or the pairing up of electrons in free radicals, as in the dimerization of nitric oxide (which is an odd-electron molecule). In the plot below for the dissociation of bromine, Ea is the enthalpy of atomization in the following reaction:

The reaction coordinate corresponds roughly to the stretching of the vibrationally-excited bond. The hypothetical activated complex is the last, longest "stretch". The reverse reaction, the recombination of two radicals, occurs immediately on contact.

The origin of the activation energy In most cases, the activation energy is supplied by thermal energy, either through intermolecular collisions or (in the case of thermal dissociation) by thermal excitation of a bond-stretching vibration to a sufficiently high quantum level.

As products are formed, the activation energy is returned in the form of vibrational energy which is quickly degraded to heat. It is worth noting, however, that other sources of activation energy are sometimes applicable:

A potential-energy profile is a diagram used to describe the mechanism of a reaction. This diagram is used to better illustrate the concepts of activation energy and the arrhenius equation, as well as to show the changing potential energy between the reactant and product that occur during a chemical reaction. For a chemical reaction to occur, there must be a contact (collision) between the reactants. For further details about the reaction rate, see the Definition of A Reaction Rate. As the reaction proceeds, the potential energy rises to a maximum and the reactants form a cluster of atoms, called the activated complex. The highest point on the diagram is the activation energy, Ea, the energy barrier that must be overcome for a reaction to occur. Beyond the maximum, the potential energy decreases as the atoms rearrange in the cluster, until it reaches a constant state of energy. Finally, the products are formed.

The direction of a reversible reaction is determined by the transition state (also known as activated complex). There is a possibility that a collision between reactant molecules may not form products. The outcome depends on the factors mentioned in the transition state theory. If the activated complex can pass the barriers, the product forms. Otherwise, the complex falls apart and reverts to the reactants.

The graph above is an example of an elementary reaction, a single step chemical reaction with a single transition state. It does not matter whether there are one or more reactants or products. A combination of multiple elementary reactions is called a stepwise reaction. The potential energy diagram of this type of reaction involves one or more reaction intermediates. An intermediate is a species that is the product of one step of a reaction and the reactant for the next step. For the diagram above, the rate-determining step is the first reaction as the first transition state is higher than the second one. There is one intermediate in this reaction.