Smog is a common form of air pollution found mainly in urban areas and large population centers. The term refers to any type of atmospheric pollution—regardless of source, composition, or concentration—that creates a significant reduction in atmospheric visibility. Smog encompasses a broad category of air pollutants created through a multitude of processes that relate specifically to the atmospheric conditions of the formation region. In the early 1900s, London was plagued by a particular type of smog that resulted from a combination of dense fog and soot from coal combustion. In modern times, the Los Angeles Basin is often associated with dense photochemical smog, produced through a combination of vehicle exhaust and sunlight. These are two of many examples of pollution classified as smog, but they are in no way chemically related. Smog refers to a diverse category of air pollutants with varying chemical composition; however, all types of smog form a visible haze that reduces atmospheric visibility.

The term smog was first coined in 1905 in a paper by Dr. Henry Antoine Des Voeux to describe the combination of smoke and fog that had been plaguing London during that time. London has since enacted strict air pollution regulations which have drastically reduced incidents of smog in that region; however, London-type smog is still a major problem in areas of the world that burn large quantities of coal for heat. In the United States, smog is most typically associated with the Los Angeles Basin of Southern California and its photochemical smog. In Los Angeles, a combination of orographic features, ample sunlight, and a dense population combine to form some of the worst air quality in the United States. 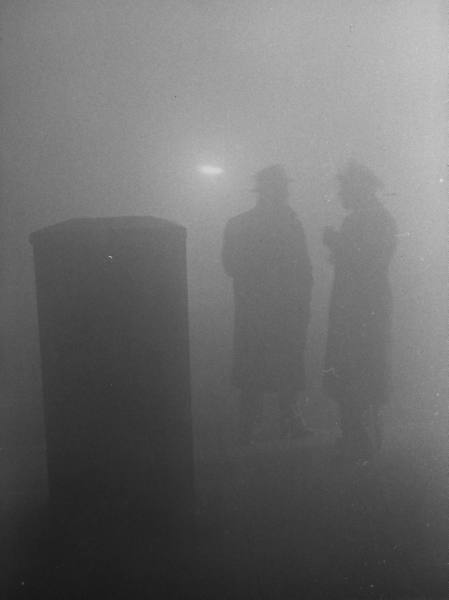 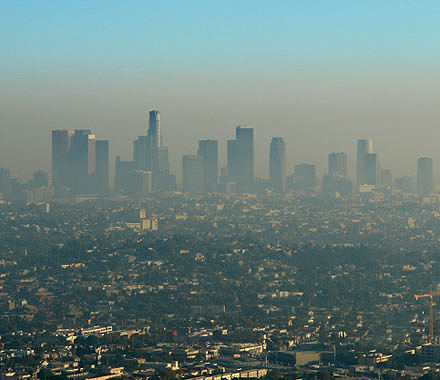 Photochemical smog, as commonly seen in the Los Angeles Basin, is mainly composed of ozone and nitrogen dioxide. During the formation of ozone, nitrogen dioxide from vehicle exhaust is photolyzed by incoming solar radiation to produce nitrogen oxide and an unpaired oxygen atom. The lone oxygen atom then combines with an oxygen molecule to produce ozone. Under normal conditions, the majority of ozone molecules oxidize nitrogen oxide back into nitrogen dioxide, creating a virtual cycle that leads to only a very slight build up of ozone near ground level. However, when volatile organic compounds (VOCs) are present in the atmosphere, the equation changes entirely. Highly reactive VOCs oxidize nitrogen oxide into nitrogen dioxide without breaking down any ozone molecules in the process. This leads to a proliferation of ozone near ground level and dense smog formation. Although photochemical smog in the United States is mainly associated with the Los Angeles Basin, photochemical smog episodes have been reported in Denver, Philadelphia and New York.

The following substances are identified in photochemical smog:

1. Nitrogen Dioxide (\(NO_2\)) from vehicle exhaust, is photolyzed by ultraviolet (UV) radiation (\(h\nu\)) from the sun and decomposes into Nitrogen Oxide (\(NO\) and an oxygen radical:

2. The oxygen radical then reacts with an atmospheric oxygen molecule to create ozone, O3:

3. Under normal conditions, O3 reacts with NO, to produce NO2 and an oxygen molecule:

This is a continual cycle that leads only to a temporary increase in net ozone production. To create photochemical smog on the scale observed in Los Angeles, the process must include Volatile organic compounds (VOC's).

4. VOC's react with hydroxide in the atmosphere to create water and a reactive VOC molecule:

5. The reactive VOC can then bind with an oxygen molecule to create an oxidized VOC:

6. The oxidized VOC can now bond with the nitrogen oxide produced in the earlier set of equations to form nitrogen dioxide and a reactive VOC molecule:

In the second set of equations, it is apparent that nitrogen oxide, produced in equation 1, is oxidized in equation 6 without the destruction of any ozone. This means that in the presence of VOCs, equation 3 is essentially eliminated, leading to a large and rapid build up in the photochemical smog in the lower atmosphere.

Every new vehicle sold in the United States must include a catalytic converter to reduce photochemical emissions. Catalytic converters force CO and incompletely combusted hydrocarbons to react with a metal catalyst, typically platinum, to produce CO2 and H2O. Additionally, catalytic converters reduce nitrogen oxides from exhaust gases into O2 and N2, eliminating the cycle of ozone formation. Many scientists have suggested that pumping gas at night could reduce photochemical ozone formation by limiting the amount of exposure VOCs have with sunlight.

Because ozone is highly reactive, it has the ability to oxidize and destroy lung tissue. Short term exposures to elevated levels of ozone (above .75 ppm) have been linked to a host of respiratory irritations including coughing, wheezing, substernal soreness, pharyngitis, and dyspnea. Prolonged exposure to the molecule has been proven to cause a permanent reduction in lung function, as well as elevate the risk of developing asthma. Sulfur dioxide is a common component of London smog. Epidemiological studies have linked short term sulfur dioxide exposure to respiratory irritations including coughing, wheezing, and pharyngitis.

3. How can pumping your gas at night reduce photochemical ozone formation?

4. True or False: Photochemical smog is created from a combination of soot, fly ash, and sulfur dioxide.

5. Why is it not a good idea to breath ozone?