Molecular orbitals (MO) are constructed from atomic orbitals. In O2 and F2, there is a crossover of the sigma and the pi ortbials: the relative energies of the sigma orbitals drop below that of the pi orbitals'. Information from the MO diagram justify O2's stability and show that it's bonding order is 2. The LUMO (lowest unoccupied molecular orbital) and HOMO (highest occupied molecular orbital) of difluoride's MO diagram help explain why the molecule is very stable - the diagram also tells us that the bond order is 1.

The formation of F2 and O2 involves 2s-2s and 2p-2p orbital interactions. S-orbitals are independent of the angular part of the wavefunction; so, they, as well as the 2pz orbital, show spherically symmetry about the nucleus. The in-phase and out-of-phase combinations of the orbitals lead to the organization of the sigma g and sigma star u labels. However, the 2px and 2py atomic orbitals combine to form pi and pi-star molecular orbitals because they are dependent on the angular part of the wavefunction. By looking at the orbital diagram, we can see that oxygen has BO of 2 because it has 10 bonding and 6 antibonding, very stable. It's paramagnetic because it posses 2 unpaired electrons.

For Difluorine, by counting the number bonding, 10, and number of antibonding, 8, give us the BO of 1. It is diamagnetic with no unpaired electrons.

2. Give bond order, and predict whether they are diamagnetic or paramagnetic for all the molecules above (question 1.)

3. What's the different between the MO diagram of all the above molecules (from question 1) compared to O2 and F2? (Note: interm of orbitals of similar symmetry and energy.) 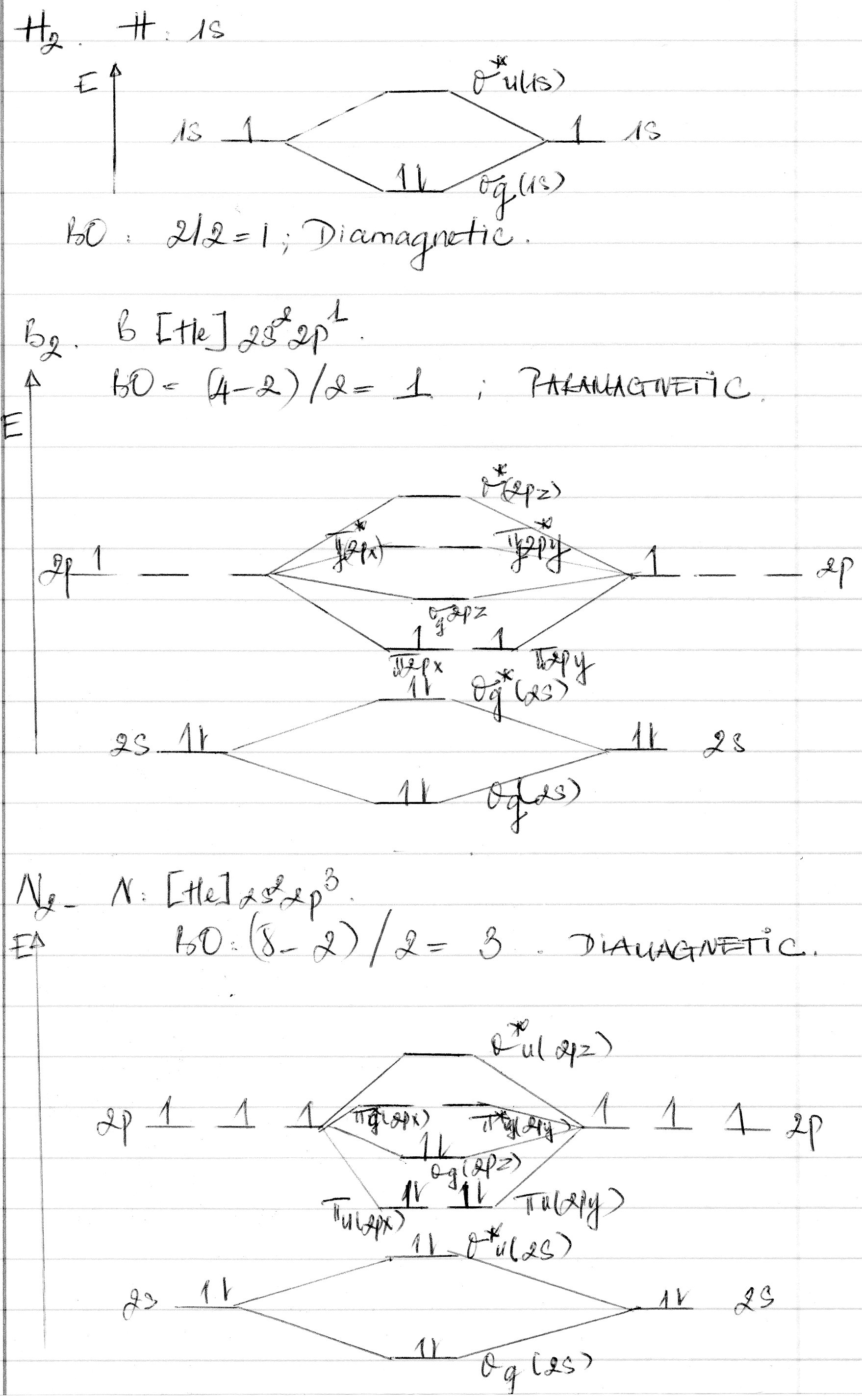 3. The difference between molecules on the questions 1 and 2 are introduced somewhat at the beginning of the topic. It basically is the mixing between orbitals of similar symmetry and energy, and the result turns out to be different compare with F2 and O2. As you can see from the MO diagram show on for all of these two cases, the energy of O2 and F2 have bi-bond higher energy than sigma-bond of the 2p orbital. This is also called sigma-bi crossover between N2 and O2.