Bonding in ozone can be explained with conjugation. In conjugation, several p orbitals can interact with each other to create a delocalized pi bond.

Conjugation can also occur in polyunsaturated alkenes or olefins. Alkenes are compounds that contain carbon-carbon double bonds. A carbon-carbon double bond is sometimes described as unsaturated. This term distinguishes alkenes from alkanes or paraffins, which have only carbon-carbon single bonds. Alkanes can be made from alkenes through the addition of hydrogen gas in the presence of a transition metal catalyst. Whereas unsaturated alkenes can take up additional hydrogens to add to double-bonded carbons, alkanes are already full: they are saturated with hydrogen and can accept no more.

The conversion of unsaturated carbon chains into saturated ones is very common. A familiar example concerns cooking fats and oils. Many vegetable oils contain unsaturated fatty acids, which contain long chains of carbon atoms having at least one carbon-carbon double bond. These double bonds produce a kink in the carbon chain, making these compounds oils at room temperature. When dairy products were rationed during World War II, vegetable oils were converted into saturated fats through catalytic hydrogenation. Saturated fats have a regularly repeating, zig-zag shape in their carbon chains and they are solids at room temperature. The product of this conversion was called oleo, or later, margarine. Margarine remains a common substitute for butter today.

Why does a kink in the carbon chain make a compound an (liquid) oil, when otherwise it would be a (solid) fat or wax?

Normally, single bonds between atoms are not difficult to rotate, and the atoms on one end of a bond can spin with respect to the other end. Double bonds, on the other hand, do not rotate easily, because the p orbitals forming the pi bond need to remain parallel to each other in order to bond. The single bonds in conjugated polyenes do not rotate freely; they behave a little more like double bonds.

When alkenes absorb ultraviolet light, an electron is promoted to a higher energy level. In alkenes, one of the electronic transitions that can occur involves the promotion of an electron from a p to a p * level. The frequency necessary to induce this electronic transition is usually in the ultraviolet range. However, increasing the number of conjugated double bonds moves this transition to lower and lower frequency, as shown in Table XX. Some molecules, such as carotene, have many conjugated double bonds, and absrob visible light. Carotene absorbs blue and green light, reflecting red and orange. It is one of the pigments responsible for the orange and red colour of leaves in the fall.

All of these properties of polyenes can be explained using quantitative molecular orbital calculations. We can also get an idea of where some of the results come from by taking a very approximate qualitative MO approach.

Start with the first entry in Table XX.

We aren't going to bother drawing a complete molecular orbital energy level diagram for ethene. We will only draw a Huckel diagram, which shows only the portion of the molecule involved in pi bonding.

For comparison, we can look at the next entry in the table. It is butadiene, CH2=CH-CH=CH2.

There must be two other combinations, because we started with four p orbitals. 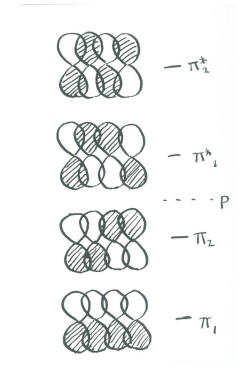 Notice that the number of nodes increases one by one, from the all-bonding combination to the all-antibonding.

This pair of low-energy electrons must be at least partly responsible for the stability of polyenes. These electrons are much lower in energy than they would be in two separate double bonds, which would be similar in energy to the double bonds in ethene. 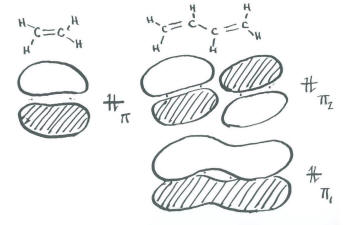 The spectroscopy results require more attention to subtleties. Note that the next pair of electrons goes into an orbital that contains a node. In a quantitative MO calculation, the presence of this antibonding interaction in an otherwise bonding orbital raises its energy slightly above the energy of the pi bond in ethene. Also, the lowest lying empty orbital has a bonding interaction, lowering its energy slightly below that of the purely antibonding orbital in ethene. The energy gap between the p to a p * levels is slightly smaller in butadiene, requiring a lower-energy photon to promote an electron. 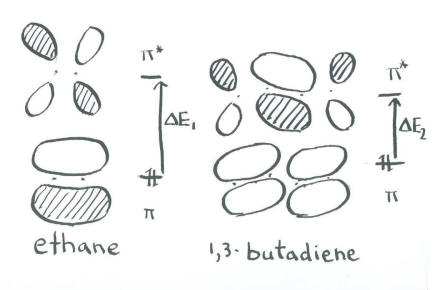 Another possible UV-visible absorption leads to n to p * transition in oxygen-containing compounds; the n refers to a nonbonding electron in a lone pair on oxygen. Construct Huckel MO diagrams for CH3-CH2-CHO (the last C is bonded to an H and also to an oxygen, as well as the next carbon) and CH2=CH-CHO. Include the oxygen nonbonding energy levels in your diagrams. Compare the n to p * energy gaps in these two compounds. How do you expect their absorption wavelengths will compare?