Ozone is a fairly simple molecule, with only three atoms. However, in order to focus on one aspect of ozone's structure, we will use a hybrid approximation in order to simplify the picture.

However, the Lewis structure of ozone does not reflect that reality. In the Lewis structure, one pair of oxygens is double-bonded and the other is single-bonded. If this were true, there would be two different bond lengths in ozone. One bond would be about 1.49 Angstroms long, like the O-O bond in peroxide. The other bond would be about 1.208 Angstroms long, like the O=O bond in dioxygen. The bond in ozone looks pretty close to a double bond, doesn't it? It is just a little longer, however.

Allyl cation, CH2=CHCH2+, is another conjugated system. Use resonance structures to show how its double bond is delocalized.

Use resonance structures to show that the negative charge in a formate ion (HCO2-, C is in the middle and attached to the three other atoms) is spread out (delocalized) over more than one oxygen atom.

We could get another look at bonding in ozone using a molecular orbital approach. We are basically concerned with one question: what is the nature of the double bond?

We already know about double bonds. We have seen them in compounds like nitrogen. A second bond is generally made through a pi bonding interaction. Therefore, we are only going to worry about the orbitals that will form pi bonds.

We have three orbitals to combine. Therefore, there will be three combinations. 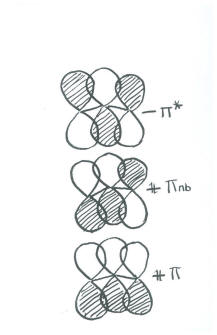 Populating these orbitals, and getting an exact energy, is not possible given the huge approximations we have made. However, in focusing on the pi bonding, we see something that we can't see in Lewis terms. There really is a pi bond that stretches the entire length of the ozone molecule. This is the lowest energy combination, with a wavelength steretching over twice the length of the molecule.

Because it is low in energy, the extended pi bond is pretty certain to be populated by electrons, and it will make some contribution to the structure of ozone. How much impact it has would depend on the population of the other combinations, which we can't predict without a more careful approach.

There is delocalization in the following species.

Construct a Huckel MO diagram for each of the cases in Problem MO14.3.

In each of the following cases, there may or may not be conjugation involving lone pairs and pi bonds. Show why or why not, using drawings of the orbitals involved.