As chemists, we are concerned with chemical changes and reactions. The thermodynamics of chemical reactions can be very important in terms of controlling the production of desired products and preventing safety hazards such as explosions. As such, measuring and understanding the thermochemistry of chemical reactions is not only useful, but essential! 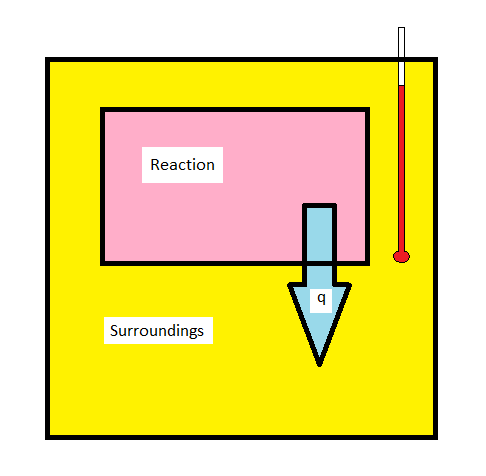 Bomb calorimetry is used predominantly to measure the heat evolved in combustion reactions, but can be used for a wide variety of reactions. A typical bomb calorimetry set up is shown here. The reaction is contained in a heavy metallic container (the bomb) forcing the reaction to occur at constant volume. As such, the heat evolved (or absorbed) by the reaction is equal to the change in internal energy (DUrxn). The bomb is then submerged in a reproducible quantity of water, the temperature of which is monitored with a high-precision thermometer.

For combustion reactions, the bomb will be loaded with a small sample of the compound to be combusted, and then the bomb is filled with a high pressure (typically about 10 atm) of O2. The reaction is initiated by supplying heat using a short piece of resistive wire carrying an electrical current.

The calorimeter must be calibrated by carrying out a reaction for which \(\Delta U_{rxn}\) is well known, so that the resulting temperature change can be related to the amount of heat released or absorbed. A commonly used reaction is the combustion of benzoic acid. This makes a good choice since benzoic acid reacts reliably and reproducibly under normal bomb calorimetry conditions. The “water equivalent” of the calorimeter can then be calculated from the temperature change using the following relationship:

where n is the number of moles of benzoic acid used, \(\Delta U_c\) is the internal energy of combustion for benzoic acid (3225.7 kJ mol-1 at 25 oC), \(e_{wire}\) accounts for the energy released in the combustion of the fuse wire, eother account for any other corrections (such as heat released due to the combustion of residual nitrogen in the bomb), and DT is the measured temperature change in the surrounding water bath.

The enthalpy of combustion can be calculated from the internal energy change if the balanced chemical reaction is known. Recall from the definition of enthalpy

at constant temperature. For the combustion of benzoic acid at 25 oC

The reaction for the combustion of naphthalene at 25 oC is: