Which of the following molecules has the shortest bond length?

Draw resonance structures for NO3- and ClO3-, please show formal charges in drawings.

Resonance structure in basic means that there are multiple way to draw a Lewis structure. For example:

How is it that this structure, PF5, have P have 5 bonds to it?

The d orbitals are available to make extra bonds allowing the P to bond to 5 Flourines instead of just Four.

Draw the Lewis structure for nitric acid (\(HNO_3\)). This may or may not include resonance structures.

What is the hybridization of carbon in CH4?

Describe the pattern of valence electrons across the periodic table (left to right and top to bottom), excluding the transition metals.

What is the difference between covalent bond and ionic bond wave functions?

What is the hybridization of HCl? Calculate the potential energy of interaction between an electron situated 5.5 Å away from an HF molecule with a dipole moment of 2.5 D.

Give two types of bonding that present in the molecule CH2. how do you do this?

1 is C atom to be not hydrid, no paired electrons and the molecule will be diamagnetic.
2 is C atom is sp3 hybbridized with 2 of the hybrid orbitals used for bonding to H's , unpaired electron. this is paramagnetic.

Describe bonding CO2 and C3H4 as hybridization. Draw diagram of forming of sigma and pi bond of C3H4 there is a double bond CO2 and its hydridization is sp and C3H4 is sp2 belong to CH2 and 1 sp of C=C=C. 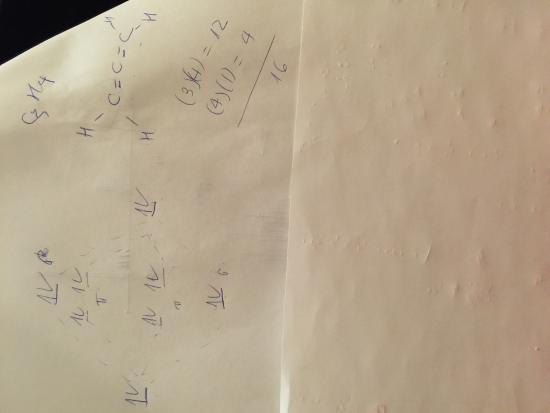 Give the bonding scheme in term of molecular orbital H2+, H2, He2+, He. Besides, give the species in the following decreasing stability. Between F2 and F2+ which one has longer bond?

Which of the following molecules have the shortest bond: F2, N2, O2? Why?

Draw the molecular orbital diagram for F2 with the atomic orbitals labeled and find the bond order.

Comparing benezene and cyclopentadiene, which one has a lesser degree of \(\pi\)-electron delocalization?

Draw the molecular orbital energy diagram for the F2 Then compare the relative stability of the molecule to F2+. Based on bond order F2+ is stable than F2

Diatomic carbon (C2) exists at very high temperatures. What type or types of bonds do you expect a molecule of diatomic carbon to have?

Answer: The molecular orbital diagram predicts that there will be a double bond consisting of two π bonds. Based on general diagram for molecular orbital of second row of O2 molecule, the

2p MO is below the

Though there are some exceptions, the double bond rule states that atoms of period 3 and greater do not form double or triple bonds. Explain why this is generally true. Hint: What properties of elements change with increasing period?

Pi bonds are usually weaker than sigma bonds because there is less orbital overlap. The larger atomic radius of period 3 and greater elements means that there is even less overlap between the orbitals that would form pi bonds. There is not enough overlap to form the pi bonds that would make for double or triple bonds.

Explain why the Si=Si double bond is not stable than the C=C. Given the covalent radius of carbon is 77 pm and Silicon is 111pm?

Silicon is significantly bigger than carbon. Thus the Si-Si bond is longer than C-C bond. However, the longer bond result in lowering the effective overlap of 3p orbital to form a π bonds. In contrast, C atoms can form the π bond from 2p orbital. Thus the Si=Si is less stable despite its larger size. 1. Find the mass of the protein if there is one atom of iron per protein.

2. This is much less than the known molar mass. In fact, it is half.

We know the protein is monomeric, so there must be two atoms of iron in each protein.

Based on the molecular orbital diagram, there are more anti-bonding than bonding state. The bonding order of Ne2 is:

What is the difference between the last three group, including O2, F2 and the other diatomic molecules in the second row of Periodic table in term of Molecular orbital theory? Be is in the second period, and very rare Be2 exist in nature. Explain the instability of Be2 , and calculate the bond order.

Will the dipole moment of a cis-dichloroethylene molecule increase or decrease upon heating? Why?