Enamines act as nucleophiles in a fashion similar to enolates. Because of this enamines can be used as synthetic equivalents as enolates in many reactions. This process requires a three steps:

Some of the advantages of using an enamine over and enolate are enamines are neutral, easier to prepare, and usually prevent the overreaction problems plagued by enolates. These reactions are generally known as the Stork enamine reaction after Gilbert Stork of Columbia University who originated the work. 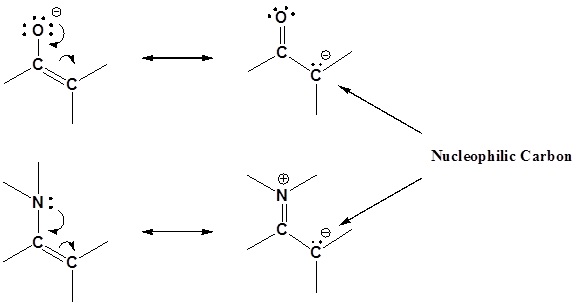 Step 1: Formation of an enamine Step 3: Reform the carbonyl by hydrolysis Enamines, like other weak bases, add 1,4 to enones. The end product is a 1,5 dicarbonyl compound.