Aliphatic nucleophilic substitution clearly involves the donation of a lone pair from the nucleophile to the tetrahedral, electrophilic carbon bonded to a halogen. We might expect this carbon to be electrophilic because of the halogen attached to it. For that reason, it attracts to nucleophile. However, the mechanism of the reaction might happen in a couple of different ways.

Compare the electronegativity of carbon to that of fluorine, chlorine, bromine and iodine.

The C-C bond forms and then the C-Cl bond breaks.

The C-Cl bond breaks and then the C-C bond forms.

However, some familiarity with bonding in the second row of the periodic table may suggest to you that mechanism A is not very likely. That mechanism would require forming five bonds to carbon before the C-Cl bond eventually breaks. We can safely ignore this possibility.

Instead, there may be a third possibility to consider.

The C-Cl bond breaks and the C-C bond forms at the same time.

Mechanism C is a concerted mechanism; two bond-making and -breaking events happen at once. However, no octet rules are violated.

Reaction progress diagrams for these two reactions would look like the illustrations below.

Mechanism B, ionization and then addition of nucleophile: 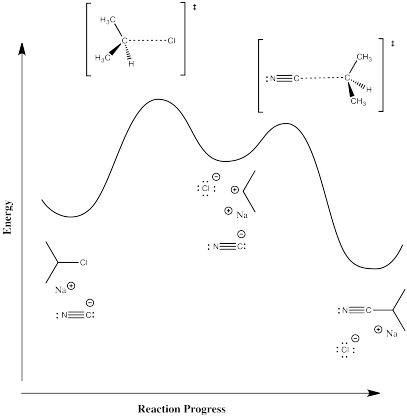 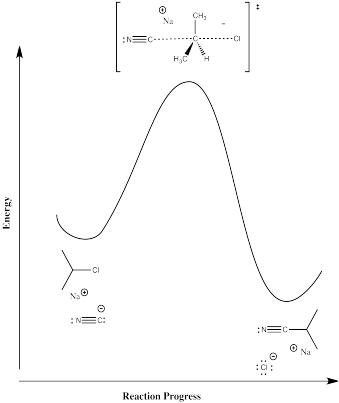 Compare mechanism B and C in terms of your expectations of the following parameters:

There isn't necessarily a reason to believe that mechanism B is the correct mechanism and mechanism C is the wrong one, or vice versa. Either one may be possible. You may need to do some work in order to figure out which one really happens. Some experiments may help to highlight what is going on.

Sometimes, a distinction between two possible mechanisms can be gained by comparing rate laws expected from each mechanism.