Electrophilic addition to alkenes generally takes place via donation of the π-bonding electron pair from the alkene to an electrophile. So far, we have only looked at protic electrophiles, but the reaction proceeds with others, as well. For instance, alkenes react quite easily with bromine.

Although bromine isn't an obvious electrophile, most of the common diatomic elements can behave that way; the exception is dinitrogen. A fleeting asymmetry of electrons can polarize the molecules to one end. That event leaves one atom partially positive and the other end partially negative. Because these elements tend to form somewhat stable anions, the partially negative atom can be displaced failry easily.

As before, a nucleophile connects with the cation in a second step. In this case, a dibromide compound is formed. However, it isn't formed in quite the way that is shown below.

We know that the mechanism shown above does not convey the whole picture because it isn't consistent with the stereochemistry of the reaction. The stereochemical outcome is shown below. The enantiomer is formed as well.

Assign configurations R or S to the product shown in the above mechanism.

However, although two enantiomers are formed in the reaction, the corresponding diastereomer is not. The following step does not occur.

Assign configurations R or S to the product shown in the above mechanism and explain why it is not an enantiomer to the compound in problem EA4.1.

Instead, the cation that forms in the reaction appears to be stabilized by lone pair donation from bromine. The intermediate species below is called a cyclic bromnium ion. The bromine prevents approach of the nucleophilic bromide from one side, ensuring formation of product through anti addition only. The trans product forms as a result.

Additional evidence of the stabilized bromonium comes from the observation of just one product in the bromination of 1-hexene. How many products would be expected in the absence of a stabilized cation? Explain with a mechanism.

Bromonium ions like the one shown below have been isolated and characterized by X-ray crystallography in at least one case. Explain why the intermediate was isolated in this case, rather than a dibromo product.

In some cases, the reaction of an alkene with bromine does not provide dibromo products. Show products of the reaction of cyclohexene under the following conditions and justify your choices with mechanisms.

Provide products for the reaction of bromine with each of the following compounds. 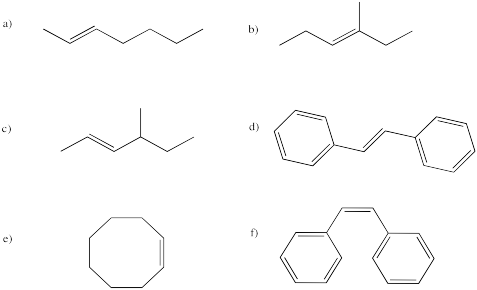