A concerted combination of two π-electron systems to form a ring of atoms having two new σ bonds and two fewer π bonds is called a cycloaddition reaction. The number of participating π-electrons in each component is given in brackets preceding the name, and the reorganization of electrons may be depicted by a cycle of curved arrows - each representing the movement of a pair of electrons. These notations are illustrated in the drawing on the right. The ring-forming cycloaddition reaction is described by blue arrows, whereas the ring-opening cycloreversion process is designated by red arrows. Note that the number of curved arrows needed to show the bond reorganization is half the number total in the brackets.

The most common cycloaddition reaction is the [4π+2π] cyclization known as the Diels-Alder reaction. In Diels-Alder terminology the two reactants are referred to as the diene and the dienophile. The following diagram shows two examples of [4π+2π] cycloaddition, and in the second equation a subsequent light induced [2π+2π] cycloaddition. In each case the diene reactant is colored blue, and the new σ-bonds in the adduct are colored red. The stereospecificity of these reactions should be evident. In the first example, the acetoxy substituents on the diene have identical E-configurations, and they remain cis to each other in the cyclic adduct. Likewise, the ester substituents on the dienophile have a trans-configuration which is maintained in the adduct. The reactants in the second equation are both monocyclic, so the cycloaddition adduct has three rings. The orientation of the quinone six-membered ring with respect to the bicycloheptane system (colored blue) is endo, which means it is oriented cis to the longest or more unsaturated bridge. The alternative configuration is called exo.

Since the dienophile (quinone) has two activated double bonds, a second cycloaddition reaction is possible, provided sufficient diene is supplied. The second cycloaddition is slower than the first, so the monoadduct shown here is easily prepared in good yield. Although this [4+2] product is stable to further heating, it undergoes a [2+2] cycloaddition when exposed to sunlight. Note the loss of two carbon-carbon π-bonds and the formation of two σ-bonds (colored red) in this transformation. Also note that the pi-subscript is often omitted from the [m+n] notation for the majority of cycloadditions involving π-electron systems. Reaction 3 is an intramolecular Diels-Alder reaction. Since the diene and dienophile are joined by a chain of atoms, the resulting [4+2] cycloaddition actually forms two new rings, one from the cycloaddition and the other from the linking chain. Once again the addition is stereospecific, ignoring the isopropyl substituent, the ring fusion being cis and endo. The fourth reaction is a [6+4] cycloaddition. 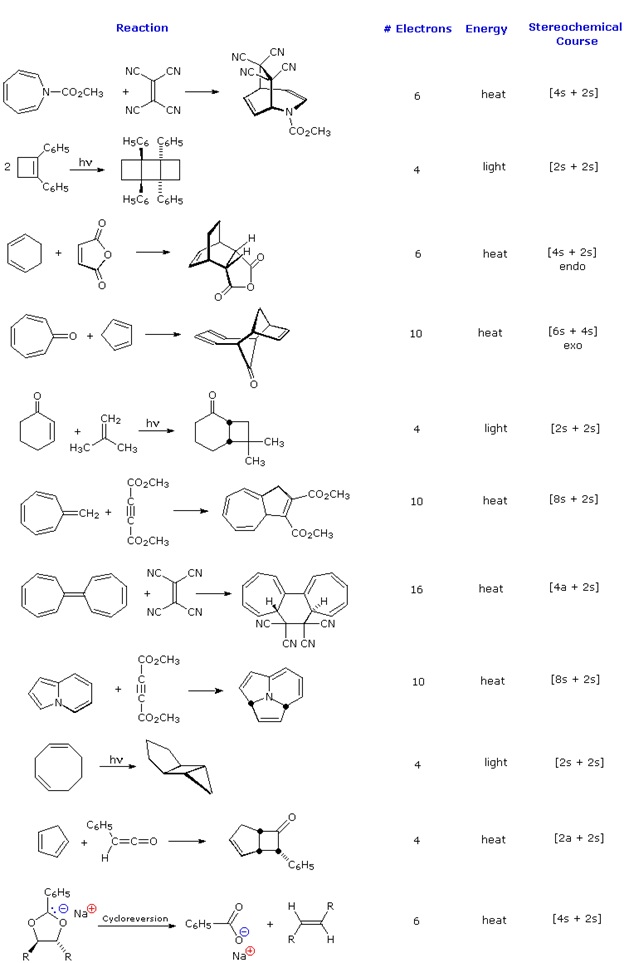