Many unsaturated cyclic compounds have exceptional properties that we now consider characteristic of "aromatic" systems. The following cases are illustrative:

The first three compounds (cyclic polyenes) have properties associated with alkenes in general. Each reacts readily with bromine to give addition products, as do most alkenes. The thermodynamic change on introducing double bonds into the carbon atom ring is also typical of alkenes (a destabilization of ca. 26 kcal/mol for each double bond). Conjugation offsets this increase in energy by a small amount (4-6 kcal/mol).

The remaining four compounds exhibit very different properties, and are considered aromatic. Benzene and pyridine are relatively unreactive with bromine, requiring heat and/or catalysts to force reaction, the result of which is substitution rather than addition. Furan and pyrrole react more rapidly with bromine, but they also give substitution products. This tendency to favor substitution rather than addition suggests that the parent unsaturated ring system has exceptional stability. Thermodynamic measurements support this conclusion. The enhanced stability, often referred to as aromatic stabilization, ranges (in the above cases) from a low of 16 kcal/mol for furan to 36 kcal/mol for benzene.

A planar (or near planar) cycle of sp2 hybridized atoms, the p-orbitals of which are oriented parallel to each other. These overlapping p-orbitals generate an array of π-molecular orbitals.

These π-orbitals are occupied by 4n+2 electrons (where n is an integer or zero). This requirement is known as The Hückel Rule. All the aromatic compounds discussed above have 6 π-electrons (n=1).

1,3-Cyclopentadiene and 1,3,5-cycloheptatriene both fail to meet the first requirement, since one carbon atom of each ring is sp3 hybridized and has no p-orbital. Cyclooctatetraene fails both requirements, although it has a ring of sp2 hybridized atoms. This molecule is not planar ( a geometry that would have 135º bond angles ). Angle strain is relieved by adopting a tub-shaped conformation; consequently, the p-orbitals can only overlap as isolated pairs, not over the entire ring. Furthermore, cyclooctatetraene has 8 π-electrons, a number not consistent with the Hückel Rule.

Benzene is the archetypical aromatic compound. It is planar, bond angles=120º, all carbon atoms in the ring are sp2 hybridized, and the pi-orbitals are occupied by 6 electrons. The aromatic heterocycle pyridine is similar to benzene, and is often used as a weak base for scavenging protons. Furan and pyrrole have heterocyclic five-membered rings, in which the heteroatom has at least one pair of non-bonding valence shell electrons. By hybridizing this heteroatom to a sp2 state, a p-orbital occupied by a pair of electrons and oriented parallel to the carbon p-orbitals is created. The resulting planar ring meets the first requirement for aromaticity, and the π-system is occupied by 6 electrons, 4 from the two double bonds and 2 from the heteroatom, thus satisfying the Hückel Rule.

Monocyclic compounds made up of alternating conjugated double bonds are called annulenes. Benzene and 1,3,5,7-cyclooctatetraene are examples of annulenes; they are named [6]annulene and [8]annulene respectively, according to a general nomenclature system in which the number of pi-electrons in an annulene is designated by a number in brackets. Some annulenes are aromatic (e.g. benzene), but many are not due to non-planarity or a failure to satisfy the Hückel Rule. Compounds classified as [10]annulenes (a Hückel Rule system) serve to illustrate these factors.

As shown in the following diagram, 1,3,5,7,9-cyclodecapentaene fails to adopt a planar conformation, either in the all cis-configuration or in its 1,5-trans-isomeric form. The transannular hydrogen crowding that destabilizes the latter may be eliminated by replacing the interior hydrogens with a bond or a short bridge (colored magenta in the diagram). As expected, the resulting 10 π-electron annulene derivatives exhibit aromatic stability and reactivity as well as characteristic ring current anisotropy in the nmr. Naphthalene and azulene are [10]annulene analogs stabilized by a transannular bond. Although the CH2 bridged structure to the right of naphthalene in the diagram is not exactly planar, the conjugated 10 π-electron ring is sufficiently close to planarity to achieve aromatic stabilization. The bridged [14]annulene compound on the far right, also has aromatic properties.

Formulation of the Hückel rule prompted organic chemists to consider the possible aromaticity of many unusual unsaturated hydrocarbons. One such compound was the 6 π-electron bicyclic structure, now known as barrelene. Although the π-bonds in barrelene are not coplanar, it was believed that transannular overlap might still lead to aromatic stabilization.
A synthesis of barrelene (bicyclo[2.2.2]-2,5,7-octatriene) was accomplished nearly fifty years ago by H. Zimmerman (Wisconsin), using a double Hofmann elimination. As shown in the following diagram, the chemical behavior of this triene confirmed it was not aromatic in the accepted sense of this term. Bromine addition took place rapidly with transannular bond formation, in the same fashion as with norbornadiene (bicyclo[2.2.1]-2,5-heptadiene). Pyrolysis of barrelene gave the expected cycloreversion products benzene and acetylene. 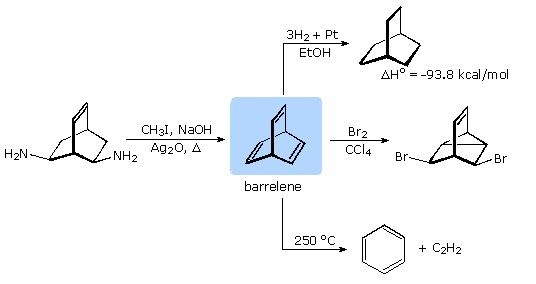 The heat of hydrogenation of barrelene reflects its thermodynamic stability. The value for cyclohexene is -28 kcal/mol, significantly less than one third of the barrelene number. Furthermore, the first double bond of barrelene is reduced with the release of 36.7 kcal/mol heat, indicating destabilization rather than stabilization.
The electronic spectrum of barrelene shows a π-electron interaction similar to that in related homoconjugated dienes. (λmax ≅220-230 nm).

An explanation for the lack of aromatic behavior in the case of barrelene may be found by comparing the orbital symmetry of the six component p-orbitals with those of benzene. Benzene is an annulene in which all six p-orbitals may be oriented with congruent overlapping phases. The cylindrical array of p-orbitals in barrelene cannot be so arranged, as shown in the diagram on the right. There will always be one region (a nodal plane) in which the transannular overlap is incongruent. By clicking on this diagram, a Jmol model of barrelene will be displayed in a separate window. This model may be moved about for viewing. The p-orbitals of the double bnds may also be displayed.

Carbanions and carbocations may also show aromatic stabilization. Some examples are:

Conjugated ring systems having 4n π-electrons (e.g. 4, 8, 12 etc. electrons) not only fail to show any aromatic properties, but appear to be less stable and more reactive than expected. As noted above, 1,3,5,7-cyclooctatetraene is non-planar and adopts a tub-shaped conformation. The compound is readily prepared, and undergoes addition reactions typical of alkenes. Catalytic hydrogenation of this tetraene produces cyclooctane. Planar bridged annulenes having 4n π-electrons have proven to be relatively unstable. Examples of 8 and 12-π-electron systems are shown below, together with a similar 10 π-electron aromatic compound.

The simple C8H6 hydrocarbon pentalene does not exist as a stable compound, and its hexaphenyl derivative is air sensitive. The 12-π-electron analog heptalene has been prepared, but is also extremely reactive (more so than cyclooctatetraene). On the other hand, azulene is a stable 10-π-electron hydrocarbon that incorporates structural features of both pentalene and heptalene. Azulene is a stable blue crystalline solid that undergoes a number of typical aromatic substitution reactions. The unexpected instability of 4n π-electron annulenes has been termed "antiaromaticity". Other examples may be cited. Thus, all attempts to isolate 1,3-cyclobutadiene have yielded its dimer, or products from reactions with other compounds introduced into the reaction system. Similarly, cyclopentadienyl cation (4 π-electrons) and cycloheptatrienyl anion (8 π-electrons) show very high reactivity when forced to form.

1) Of the following compounds (A through J), which would be considered aromatic by application of the Hückel Rule?

2) Of the following compounds (A through J), which would be considered aromatic by application of the Hückel Rule?