Benzene rings may be joined together (fused) to give larger polycyclic aromatic compounds. A few examples are drawn below, together with the approved numbering scheme for substituted derivatives. The peripheral carbon atoms (numbered in all but the last three examples) are all bonded to hydrogen atoms. Unlike benzene, all the C-C bond lengths in these fused ring aromatics are not the same, and there is some localization of the pi-electrons.

The six benzene rings in coronene are fused in a planar ring; whereas the six rings in hexahelicene are not joined in a larger ring, but assume a helical turn, due to the crowding together of the terminal ring atoms. This helical configuration renders the hexahelicene molecule chiral, and it has been resolved into stable enantiomers.

As these extended aromatic compounds become larger, the ratio of hydrogen to carbon decreases. For example, the symmetrical hexacyclic compound coronene has a H/C ratio =1/2, compared with 1 for benzene. If we were to imagine fused ring systems of this kind to be further extended in space, the H/C ratio would approach zero, and the resulting compound would be a form of carbon. Such a carbon allotrope exists and is called graphite. Another well-characterized carbon allotrope is diamond. The structures for these two forms of carbon are very different, and are displayed below. Diamond is an extended array of sp3 hybridized carbon atoms; whereas, graphite consists of overlapping sheets of sp2 hybridized carbon atoms arranged in a hexagonal pattern. You may examine models of partial diamond and graphite structures by clicking on the appropriate structure below.

A comparison of the coronene and corannulene models discloses an interesting difference in their shapes. Coronene is absolutely flat and, aside from the peripheral hydrogens, resembles a layer of graphite. Its very high melting point reflects this resemblance. Corannulene, on the other hand, is slightly curved, resulting in a bowl-like shape.

If we extend the structure of corannulene by adding similar cycles of five benzene rings, the curvature of the resulting molecule should increase, and eventually close into a sphere of carbon atoms. The archetypical compound of this kind (C60) has been named buckminsterfullerene because of its resemblance to the geodesic structures created by Buckminster Fuller. It is a member of a family of similar carbon structures that are called fullerenes. These materials represent a third class of carbon allotropes. Alternating views of the C60 fullerene structure are shown on the right, together with a soccer ball-like representation of the 12 five and 20 six-membered rings composing its surface. Precise measurement by Atomic Force Microscopy (AFM) has shown that the C-C bond lengths of the six-membered rings are not all equal, and depend on whether the ring is fused to a five or six-membered beighbor. 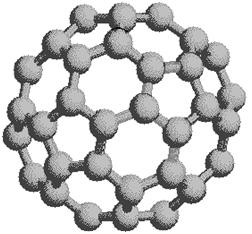 Interest in the fullerenes has led to the discovery of a related group of carbon structures referred to as nanotubes. As shown in the following illustration, nanotubes may be viewed as rolled up segments of graphite. The chief structural components are six-membered rings, but changes in tube diameter, branching into side tubes and the capping of tube ends is accomplished by fusion with five and seven-membered rings. Many interesting applications of these unusual structures have been proposed. A model of a nanotube will be displayed by clicking on the diagram