This section contains little that is new. If you mastered the IUPAC nomenclature of alkanes, you should have little difficulty in naming alkyl halides. Notice that when a group such as CH2Br must be regarded as a substituent, rather than as part of the main chain, we may use terms such as bromomethyl.

You will find it easier to understand the reactions of the alkyl halides if you keep the polarity of the C-X bond fixed permanently in your mind (see ”The Polar C-X Bond” shown in the reading below).

Alkyl halides are also known as haloalkanes. This page explains what they are and discusses their physical properties. alkyl halides are compounds in which one or more hydrogen atoms in an alkane have been replaced by halogen atoms (fluorine, chlorine, bromine or iodine). For example:

In a primary (1°) haloalkane, the carbon which carries the halogen atom is only attached to one other alkyl group. Some examples of primary alkyl halides include:

In a secondary (2°) haloalkane, the carbon with the halogen attached is joined directly to two other alkyl groups, which may be the same or different. Examples:

In a tertiary (3°) haloalkane, the carbon atom holding the halogen is attached directly to three alkyl groups, which may be any combination of same or different. Examples:

Please indicate if the following haloalkanes are methyl, 1o, 2o, or 3o:

Alkyl halides are systematically named as alkanes (Section 3-4) where the halogen is a substituent on the parent alkane chain. To summarize the rules discussed in detail in Section 3-4, there are three basic steps to naming alkyl halides.

1) Find and name the longest carbon chain and name it as the parent. Remember is an alkene or alkyne is present, the parent chain must contain both carbons of the multiple bond.

2) Number the parent chain consecutively, starting at the end nearest a substituent group. Then assign each substituent a number. Remember the IUPAC system uses prefix to indicate the halogen followed by the suffix -ide. The prefixes are fluoro- for fluorine, chloro- for chlorine, bromo- from bromine, and iodo- for iodine. The name of a halogen is preceded by a number indicating the substituent’s location on the parent chain.

3) If there is an ambiguity in numbering the parent chain, begin on the end which is closer to the substituent which comes first alphabetically.

1) Give the common and IUPAC names for each compound.

2) Give the IUPAC name for each compound.

1) a) The alkyl group (CH3CH2CH2–) is a propyl group, and the halogen is bromine (Br). The common name is therefore propyl bromide. For the IUPAC name, the prefix for bromine (bromo) is combined with the name for a three-carbon chain (propane), preceded by a number identifying the carbon atom to which the Br atom is attached, so the IUPAC name is 1-bromopropane.

c) The alkyl group (CH3CH2–) is a ethyl group, and the halogen is iodide (I). The common name is therefore ethyl iodide. For the IUPAC name, the prefix for Iodide (Iodod) is combined with the name for a two-carbon chain (ethane), preceded by a number identifying the carbon atom to which the I atom is attached, so the IUPAC name is 1-bromoethane

d) The alkyl group (CH3CH2CH2CH2–) is a butyl group, and the halogen is fluorine (F). The common name is therefore butyl fluoride. For the IUPAC name, the prefix for Fluorine (Fluoro) is combined with the name for a four-carbon chain (butane), preceded by a number identifying the carbon atom to which the Br atom is attached, so the IUPAC name is 1-fluorobutane.

2) a) The parent alkane has five carbon atoms in the longest continuous chain; it is pentane. A bromo (Br) group is attached to the second carbon atom of the chain. The IUPAC name is 2-bromopentane.

b) The parent alkane is hexane. Methyl (CH3) and bromo (Br) groups are attached to the second and fourth carbon atoms, respectively. Listing the substituents in alphabetical order gives the name 4-bromo-2-methylhexane.

d) 1-Bromo-2-chloro-4-methylpentane rine (F). The common name is therefore butyl fluoride. For the IUPAC name, the prefix for Fluorine (Fluoro) is combined with the name for a four-carbon chain (butane), preceded by a number identifying the carbon atom to which the Br atom is attached, so the IUPAC name is 1-fluorobutane.

As discussed in Section 6. 4, halogens are more electronegative than carbon. This results in a carbon-halogen bond that is polarized with the carbon atom bearing a partial positive charge and the halogen a partial negative charge. This polarity can be distinctly seen when viewing the electrostatic potential map of a methyl halide. Electron density is shown by a red/yellow color which is almost exclusively around the halogen atom. The methyl portion of the compound lacks electron density which is shown by a blue/green color. 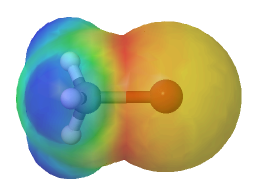 The alkyl halides are at best only slightly soluble in water. For a haloalkane to dissolve in water you have to break attractions between the haloalkane molecules (van der Waals dispersion and dipole-dipole interactions) and break the hydrogen bonds between water molecules. Both of these cost energy. Energy is released when new intermolecular forces are generated between the haloalkane molecules and water molecules. These will only be dispersion forces and dipole-dipole interactions. These are not as strong as the original hydrogen bonds in the water, and so not as much energy is released as was used to separate the water molecules. The energetics of the change are sufficiently "unprofitable" that very little dissolves.

Alkyl halides tend to dissolve in organic solvents because the new intermolecular attractions have much the same strength as the ones being broken in the separate haloalkane and solvent.

The pattern in strengths lies in the strength of the bond between the carbon atom and the halogen atom. Previously in this section, it was noted that the trend for bond strength increases from C-I to C-Br to C-Cl with C-F bonds being the strongest. To react with the alkyl halides, the carbon-halogen bond has got to be broken. Because that gets easier as you go from fluoride to chloride to bromide to iodide, the compounds get more reactive in that order. Iodoalkanes are the most reactive and fluoroalkanes are the least. In fact, fluoroalkanes are so unreactive that we will ignore them completely from now on in this section!

1) Give the names of the following organohalides: 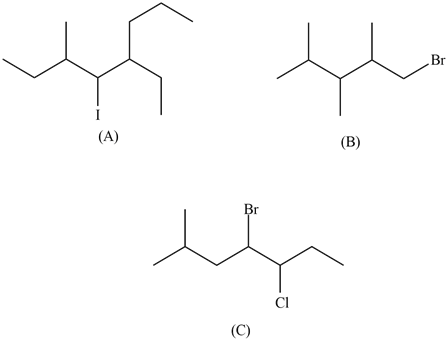 2) Draw the structures of the following compounds: