A specific example of each general class is provided in the diagram below. In the first two, an anionic nitrogen species undergoes an SN2 reaction with a modestly electrophilic alkyl halide reactant. For example #2, the Gabriel synthesis is shown. The alkaline conditions deprotonate phthalmide to create a strong nucleophile for SN2 reactions with alkyl halides. Example #3 also starts with an SN2 reaction of cyanide with an alkyl halide following by reduction of the cyano group to form a primary amine that extends the carbon system of the alkyl halide by a methylene group (CH2). In all three of these methods 3º-alkyl halides cannot be used because the major reaction path is an E2 elimination.

The methods illustrated by examples #4 and #5 proceed by the reaction of ammonia, or equivalent nitrogen nucleophiles, with the electrophilic carbon of a carbonyl group. A full discussion of carbonyl chemistry is presented in an independent chapter, but for present purposes it is sufficient to recognize that the C=O double bond is polarized so that the carbon atom is electrophilic. Nucleophilic addition to aldehydes and ketones is often catalyzed by acids. Acid halides and anhydrides are even more electrophilic, and do not normally require catalysts to react with nucleophiles. The reaction of ammonia with aldehydes or ketones occurs by a reversible addition-elimination pathway to give imines (compounds having a C=N function). These intermediates are not usually isolated, but are reduced as they are formed (i.e. in situ). Acid chlorides react with ammonia to give amides, also by an addition-elimination path, and these are reduced to amines by LiAlH4. Nitriles can be converted to primary amines by reaction with lithium aluminum hydride. During this reaction the hydride nucleophile reacts with the electrophilic carbon in the nitrile to form an imine anion. Once stabilized by a Lewis acid-base complexation the imine salt can accept a second hydride to form a dianion. The dianion can then be converted to an amine by addition of water.

9. Complete the reaction map below to build reaction patterns for multiple step synthesis. 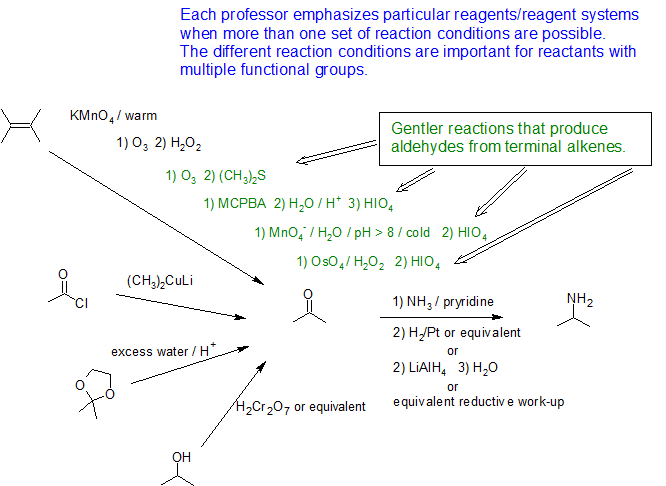