P3.1: Draw an energy vs dihedral angle graph for rotations about the C2-C3 bond of 2-methylbutane. Start with the highest-energy conformation as the 0o point. For each energy peak and valley, draw a corresponding Newman projection.

b) Which of the following are trans disubstituted cyclohexanes? 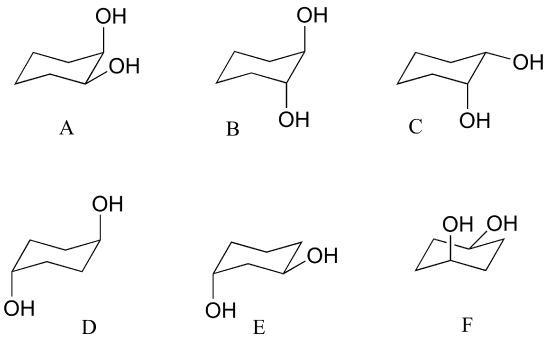 c) Draw A-F above in two dimensions (rings in the plane of the page, substituents drawn as solid or dashed wedges).

d) Structure D does not have any chiral centers. Explain.

e) Draw a diastereomer of structure D (in two dimensions, as in part c).

f) Are structure D and its diastereomer chiral?

g) Assign R/S designations to the two chiral centers in structure B (hint: making a model will be very helpful!)

P 3.3: The following are structures, drawn in two dimensions, of drugs listed on the products web page of Merck Pharmaceutical. One of the compounds is achiral.

a) Circle all chiral centers. (Hint: Don't panic! Remember - you are looking for sp3-hybridized carbons with four different substituents.) b) How many diastereomers are possible for desogestrel?

P3.4: Three of the four structures below are chiral. Assign R/S designations to all chiral centers, and identify the achiral molecule. P3.5: Draw the R,R stereoisomers of the structures below.

P3.6: Below are the structures of sucralose, the artificial sweetener with the brand name Splenda (TM), and the cancer drug Paclitaxel. Give an R or S designation to chiral centers indicated with an arrow.

P3.7: The four drugs below were featured in a Chemical & Engineering News article (April 16, 2007, p. 42) on new drugs that had been developed in university labs.

a) Identify each as chiral or achiral, and identify all stereocenters. Also, state how many possible stereoisomers exist for each structure. b) Two fluorinated Epivar derivatives (structures A and B below) were also mentioned in this article. What is the relationship between structures A and B? (Your choices: not isomers, constitutional isomers, diastereomers but not epimers, epimers, enantiomers, identical) P3.8: Redraw the following structures in the flat ring, solid/dash wedge convention (the drawings have been started for you).

P3.9: Below is an experimental drug for Alzheimer's disease that was mentioned in the March 13, 2007 issue of Chemical and Engineering News.

a) Label all stereocenters as R or S.

b) Draw the enantiomer of the molecule shown.

P3.10: The molecules below are potential new drugs for the treatment of Duchenne muscular dystrophy (molecule A) and skin cancer (molecule B) (Chemical and Engineering News Sept 26, 2005, p. 39). Given the R/S designations, redraw the structure showing the correct stereochemistry.

P3.11: Draw the structure of the following molecules:

P3.12: Coelichelin (the structure below to the left) is a natural product from soil bacteria that was identified using a technique known as 'genome mining' (Chemical and Engineering News Sept. 19, 2005, p. 11). What is the relationship between coelichelin and the compound shown below and to the right?

P3.13: Identify the relationships between the following pairs of structures (Not isomers, constitutional isomers, diastereomers but not epimers, epimers, enantiomers, identical) P3.14: Identify the relationships between each of the following pairs of pentose sugars (not isomers, constitutional isomers, diastereomers but not epimers, epimers, enantiomers, identical). P3.15: Identify the relationships between each of the following pairs of hexose sugars (not isomers, constitutional isomers, diastereomers but not epimers, epimers, enantiomers, identical). P3.16: The compound drawn below (not showing stereochemistry) has been identified as a potential anti-inflammatory agent by scientists at Schering-Plough a pharmaceutical company (see Chemical and Engineering News Nov. 28, 2005 p. 29). How many stereoisomers are possible for the compound? P3.17: Secramine is a synthetic compound that has been shown to interfere with the transport of newly synthesized proteins in the cell (see Chemical and Engineering News Nov. 28, 2005, p. 27). Also drawn below is a (hypothetical) isomer of secramine.

b) Locate a five-membered ring in the secramine structure.

P3.18: The natural product bistramide A has been shown to bind to actin, an important structural protein in the cell, and supress cell proliferation (see Chemical and Engineering News Nov. 21, 2005, p. 10).

a) Label the alkene functional groups as E, Z, or N (no E/Z designation possible)

b) Theoretically, how many stereoisomers are possible for bistramide A?

a) Draw Newman projections of the gauche and the anti conformations of 1,2-ethanediol.

b) Why might the gauche conformation be expected to be the more stable of the two?

c) Do you think that gauche is also the most stable conformation of 1,2-dimethoxyethane? Explain.

a) Label the stereochemical configuration at C1 and C2 for the structure you drew.

b) Build a model of your molecule, and try out different possible boat conformations. Can you find one in which there is a plane of symmetry?

c) Is cis-1,2-dimethylcyclohexane a chiral molecule?

P3.21: In some special cases, a 'chiral center' can be composed of several atoms instead of just one, and molecules which contain such multi-atom chiral centers are indeed chiral. What is the relationship between the two two difluorallene compounds below? It will be very helpful to make models, and review the fundamental definitions in this chapter.