The synthesis of Longifolene has held the fascination of synthetic organic chemists for several decades. Since the compound was available in a pure form from natural sources in sufficient quantities, the fascination was purely academic. During structure elucidation studies, it was observed that this bridged structure underwent a host of migration reactions. These rearrangements were of interest both from theoretical and practical points of view. The concept of ‘disconnection’ and ‘retrosynthesis’ that was evolving around 1960’ led to the development of Logic in Organic Synthesis during this period. The structure of Longifolene was a happy exploration ground for those grand masters who were involved in these developments. For this reason synthesis of Longifolene has been closely associated with these developments. While analyzing such structures, Corey had suggested a few ‘strategic bond disconnection’

for logical approaches towards synthesis (Fig 7.1). Please note that these suggestions were meant to provide guidelines and therefore need not restrict any further innovations. It was further pointed out that any one of these disconnections could lead to several paths for the construction of synthetic trees. For example, let us consider one such disconnections at bond ‘a’ shown in Fig 7.2. This could throw open four branches on the synthetic tree. Out of these, Corey first selected the Michael strategy because one such cyclisation was already known in the chemistry of Santonin. L.W. Oppolzer et.al., set up the longifolene ring system through a rearrangement transform. He made use of De Mayo reaction, which is a photocyclisation – retroaldol sequence shown below (Fig 7.4).

As shown in the synthetic scheme Fig 7.5, a [2+2] cycloaddition reaction on C gave D, which exposed the retroaldol components after an hydrogenolysis. Another useful feature of this synthesis is the utilization hydrogenolysis reaction on cyclopropane to expose a gem-dimethyl group. A chiral starting material A yielded (+)-Longifolene in 25% overall yield. 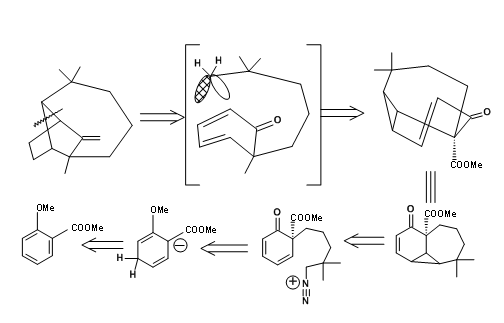 The synthetic scheme is shown in Fig 7.7. The Diels-Alder strategy indicated in the introduction to this section on Longifolene was demonstrated by Fallis et.al., (Fig 7.8) Another Diels-Alder strategy came from Ho and Liu (Fig 7.9). Note the utilization of the exo- cyclic olefin by converting this unit to the required seven membered ring moiety. A cationic cyclisation strategy for Longifolene skeleton reported by Johnson’s school has some interesting features. Fig 7.10 depicts the cyclisation reaction that forms the key step in this scheme.

The detailed synthetic plan is shown in Fig 7.11. Note that this cyclization still leaves the methyl group on the wrong carbon. The unwanted –OH group was removed via a Lewis acid complexed hydride transfer reaction. The acid catalyzed isomerisation of the double bond is followed by a hydroxylation- oxidation sequence to expose a carbonyl group. The quaternary methyl group was then introduced via., an enolate. The exocyclic methylene was reintroduced to complete the synthesis.