Alessandro Giuseppe Antonio Anastasio Volta (1745–1827) was an Italian physicist, chemist, and pioneer of electricity and power[2][3][4]; who is credited as the inventor of the electric battery and the discoverer of methane. He invented the Voltaic pile in 1799; with this invention, Volta proved that electricity could be generated chemically, and debunked the prevalent theory that electricity was generated solely by living beings. Volta's invention sparked a great amount of scientific excitement and led others to conduct similar experiments, which eventually led to the development of the field of electrochemistry.[6]

Sir Humphry Davy, 1st Baronet (1778–1829) was a Cornish chemist and inventor. He was a pioneer in the field of electrolysis, which uses the voltaic pile to split common compounds and thus prepare many new elements. He went on to electrolyse molten salts and discovered several new metals, including sodium and potassium in 1807. The following year, he discovered calcium, strontium, barium, magnesium and boron, as well as the elemental nature of chlorine and iodine. He also studied the forces involved in these separations, inventing the new field of electrochemistry.

Davy's laboratory assistant, Michael Faraday, went on to enhance Davy's work and would become the more famous and influential scientist. Davy is supposed to have even claimed Faraday as his greatest discovery. Faraday (1791–1867) was an English scientist who contributed to the study of electromagnetism and electrochemistry. His main discoveries include the principles underlying electromagnetic induction, diamagnetism and electrolysis.

As a chemist, Faraday discovered benzene, investigated the clathrate hydrate of chlorine, invented an early form of the Bunsen burner and the system of oxidation numbers, and popularized terminology such as "anode", "cathode", "electrode" and "ion". Faraday ultimately became the first and foremost Fullerian Professor of Chemistry at the Royal Institution, a lifetime position. His work on electrolysis paved the way for subsequent experiments performed using cathode ray tubes.

The TV set seen below is becoming harder and harder to find these days. The main reason is because they are older and based on outdated technology. The new TV sets are flat screen technology that take up less space and give better picture quality, especially with the advent of high-definition broadcasting. The technology used in the older TV sets used cathode ray tubes. A beam of electrons was sprayed to a picture tube which was treated to react with the electrons to produce an image. Similar CRT (cathode ray tube) devices were used in computer monitors, now also replaced by flat screen monitors. 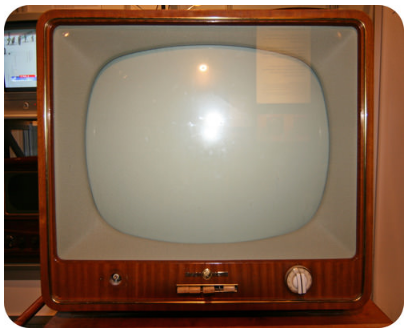 The first cathode ray tube prototype was developed by Heinrich Geissler, a German glassblower and physicist. He used a mercury pump to create a vacuum in a tube. Geissler explored a number of techniques to remove air from the tube and to prevent leaks, as well as ways to get good connections of the wires in the tubes. In 1878, Sir William Crookes, a British scientist, displayed the first cathode rays using a modification of the Geissler apparatus. His major contribution to construction of the tube was to develop ways to evacuate almost all the air from the tube. Crookes also carried out many experiments using more reliable equipment to confirm earlier finding about the properties of cathode rays. He discovered two things which supported the hypothesis that the cathode ray consisted of a stream of particles. 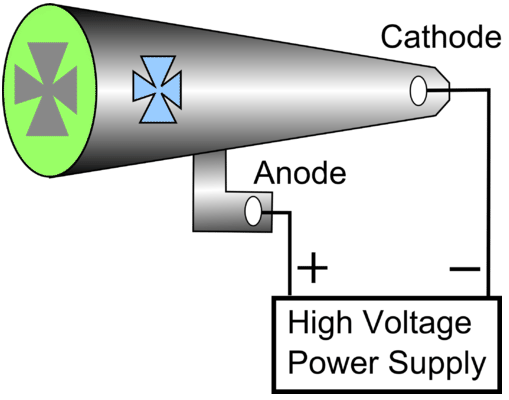 Further Research with the Crookes Tube

Crookes' work opened the door to a number of important discoveries. Other scientists were able to demonstrate that the "cathode ray" was actually a stream of electrons. In 1897, Karl Ferdinand Braun developed the first oscilloscope, using a cathode ray tube to see an electrical pulse as it passed through the instrument. The invention of television would not have been possible without the cathode ray tube. Work with a modified system led to the discovery of x-rays in 1895 by the German physicist Wilhelm Roentgen. This simple device has led to major advances in science and technology.

In 1897, the British physicist J. J. Thomson (1856–1940) proved that atoms were not the most basic form of matter. He demonstrated that cathode rays could be deflected, or bent, by magnetic or electric fields, which indicated that cathode rays consist of charged particles (Figure 1.17c). More important, by measuring the extent of the deflection of the cathode rays in magnetic or electric fields of various strengths, Thomson was able to calculate the mass-to-charge ratio of the particles. These particles were emitted by the negatively charged cathode and repelled by the negative terminal of an electric field. Because like charges repel each other and opposite charges attract, Thomson concluded that the particles had a net negative charge; these particles are now called electrons. Most relevant to the field of chemistry, Thomson found that the mass-to-charge ratio of cathode rays is independent of the nature of the metal electrodes or the gas, which suggested that electrons were fundamental components of all atoms.

Video \(\PageIndex{2}\)Video from Davidson College demonstrating Thompson's e/m experiment. You can also use an applet from the Google Group Physics Flash to simulate the experiment and here is another applet, from Kings Center for Visual Exploration in Alberta (KCVE) with a detailed explanation

In 1909, more information about the electron was uncovered by American physicist Robert A. Millikan via his “oil drop” experiments. Millikan created microscopic oil droplets, which could be electrically charged by friction as they formed or by using X-rays. These droplets initially fell due to gravity, but their downward progress could be slowed or even reversed by an electric field lower in the apparatus. By adjusting the electric field strength and making careful measurements and appropriate calculations, Millikan was able to determine the charge on individual drops (Figure \(\PageIndex{2}\)) .

Scientists had now established that the atom was not indivisible as Dalton had believed, and due to the work of Thomson, Millikan, and others, the charge and mass of the negative, subatomic particles—the electrons—were known. However, the positively charged part of an atom was not yet well understood.