Athough the VSEPR model is useful in predicting molecular geometry, it fails to predict the shapes of isoelectronic species and transition metal compounds. This model does not take relative sizes of substituents and stereochemically inactive lone pairs into account. As a result, VSEPR cannot be applied to heavy d-block species that experience the stereochemical inert pair effect.

The VSEPR model is a powerful tool used by chemists to predict the shapes of molecules; yet like many other theories, it has exceptions and limitations. This article discusses in detail the various limitations of VSEPR and gives explanations for these exceptions.

Isoelectronic species are elements, ions and molecules that share the same number of electrons. According to the VSEPR model, chemists determine the shape of the molecules based on numbers of valence electrons (i.e. bond pairs and lone pairs). However, two isoelectronic species, can differ in geometry despite the fact that they have the same numbers of valence electrons. For example, both IF7and [TeF7]- have 56 valence electrons; VSEPR theory predicts both to be pentagonal bipyramidal. However, electron diffraction and X-ray diffraction data indicate that the equatorial F atoms of [TeF7]- are not coplanar. Moreover, the bond lengths of equatorial I-F and Te-F bonds are different. The VSEPR model fails to accommodate the correct shape for [TeF7]- and other species because it does not account for such irregularities.

The VSEPR model also fails to predict the structure of certain compounds because it does not take relative sizes of the substituents and stereochemically inactive lone pairs into account. Elements in the d-block have relatively high atomic masses and they tend to have stereochemically inactive electron pairs. In other words, valence shell s-electrons in these elements tend to adopt a non-bonding role. This is known as the inert pair effect. As a result, VSEPR does not give correct geometries for these transitional metal complex compounds.. For example, [SeCl6]2- , [TeCl6]2- ,and [BrF6]- are predicted to adopt pentagonal bipyramidal geometries according to VSEPR since the central atom can have seven electron pairs. However, due to the stereochemical inert pair effect, these molecules are found to be regular octahedral because one of the electron pairs is stereochemically inactive. 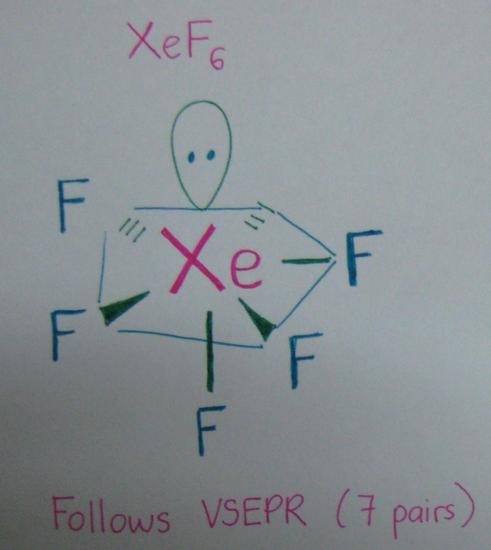