HF is the starting material for the preparation of most fluorine containing compounds and this is isolated as a byproduct from the production of phosphoric acid. Treatment of minerals such as fluorspar/ fluorite CaF2, (often associated with phosphate-containing minerals) with sulfuric acid gives hydrogen fluoride by the following reaction:

Difluorine is prepared by the electrolysis of HF. Since F2 is strongly oxidising, this is the only viable method that can be performed on an industrial scale and given the extreme reactivity of the F2, it requires strictly controlled conditions. It is believed that many were blinded or killed during the many years in trying to perfect the process and experiment with the toxic gas.

"Henry Moissan (1852-1907) eventually succeeded in preparing fluorine in 1886 by the electrolysis of a solution of potassium hydrogen difluoride (KHF2) in liquid hydrogen fluoride (HF). The mixture was needed because hydrogen fluoride is a non-conductor. The device was built with platinum/iridium electrodes in a platinum holder and the apparatus was cooled to -50 °C. The result was to completely isolate the hydrogen produced from the negative electrode from the fluorine produced at the positive one. This is essentially still the way fluorine is produced today. For this achievement, he was awarded the Nobel Prize in 1906."[5].

It is recorded that he died shortly after his return from collecting his Nobel Prize and that death was a result of acute appendicitis. It is not known whether his studies on fluorine contributed to his early death.

"The modern electrolysis cell contains a steel or copper cathode, ungraphitized carbon anode, and a Monel metal (Cu/Ni) diaphragm that is perforated below the surface of the electrolyte, but not above it, thus preventing the H2 and F2 products from recombining. As electrolysis proceeds, the HF content of the melt is renewed by adding dry gas from cylinders." [1]

The Castner-Kellner process, invented jointly by Hamilton Castner and Karl Kellner in the 1890's is the earliest industrial process for the extraction of dichlorine (Cl2). 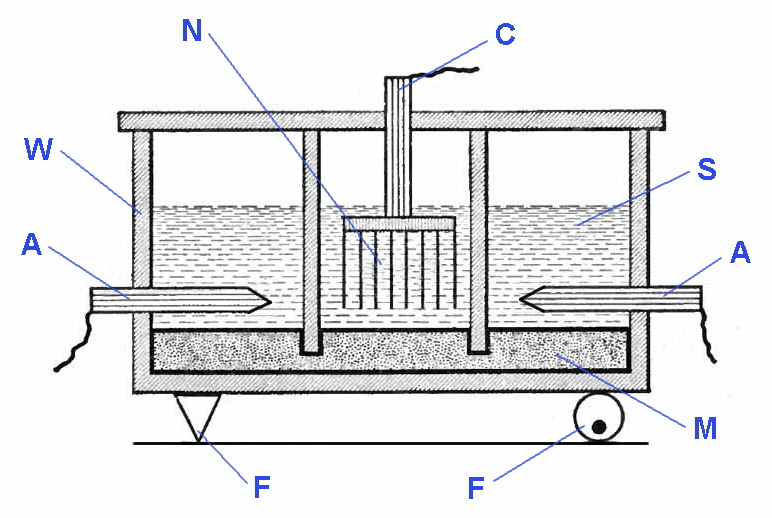 In the diagram above there are two types of cells shown, one in the centre and two outer cells. They are separated by slate walls (W) that dip into a pool of liquid mercury (M). The outer cells have a solution a sodium chloride (S), a graphite anode (A) and mercury cathode. The inner cell has a solution of sodium hydroxide (N), an iron cathode (C) and here the mercury acts as the anode. The mercury is able to move between the three cells aided by a rocking mechanism (F), but the solutions are kept separated by the slate walls.

The overall processes are given by the following equations:

As the electrolysis proceeds the concentration of sodium chloride in the outside cells decreases and the concentration of sodium hydroxide in the center cell increases. When this reaches a concentration of about 50% some of this sodium hydroxide solution is removed from center cell to be replaced with water. Sodium chloride is added to the outside cells to replace that used up. Dihydrogen and dichlorine are collected as gases in high purity. An animation of the working of a modern plant can be see at Euro-Chlor, Chlorine Online

The large scale use of mercury has raised numerous environmental issues and many of these industrial plants have been decommissioned and the sites cleaned up, those that remain are expected to wind up operation by 2020. According to Euro Chlor "In 2007, emissions for all mercury cells across Western Europe reached an all-time low of 0.97 grammes per tonne of chlorine capacity."

Apart from the mercury cell process, two others are in operation and these require less electricity and do not use mercury. They are the "membrane cell process" and the diaphragm cell process".

Internationally, bromine reserves are found in Arkansas, USA, the waters of the Dead Sea, Israel and Shandong Province, China. In 2007, approximately 556,000 metric tonnes (worth around US$2.5 billion) of bromine were produced predominantly by these three countries and this equated to a sixfold increase since the 1960s.

The extraction involves treating the bromide-rich brines with chlorine gas then flushing through with air. In this treatment, bromide anions are oxidized to bromine by the chlorine gas.

In the Atacama Desert in northern Chile, there are vast deposits of a mixture, often referred to as caliche, composed of gypsum, sodium chloride, plus other salts and sand, associated to Salitre ("Chile Saltpeter"). Salitre, in turn, is a composite of sodium nitrate (NaNO3) and potassium nitrate (KNO3) and was an important source of export revenue for Chile until World War I, when both nitrates began to be industrially produced in large quantities in Europe.

These deposits are the largest known natural source of nitrates in the world, containing up to 25% sodium nitrate and 3% potassium nitrate, as well as iodate minerals, sodium chloride, sodium sulfate, and sodium borate (borax). The caliche beds are from 0.2 to 5 meters thick, and they are mined and refined to produce a variety of products, including sodium nitrate (for agriculture or industry uses), potassium nitrate, sodium sulfate, iodine, and iodine derivatives. The discovery of the iodate impurity in the Chilean saltpetre dates from 1840 and led to the large scale extraction process that saw Chile as the largest producer of iodine worldwide in 2007, followed by Tokyo, Japan and Oklahoma, USA where the iodine was recovered from brine solutions.

Difluorine (F2), is a highly toxic, colorless gas, and is highly reactive. It is so reactive that it even forms compounds with Kr, Xe, and Rn, elements once considered inert. Due to its high reactivity it is difficult to find a container in which it can be stored. F2 attacks both glass and quartz, for example, and causes most metals to burst into flame. It has to be handled in equipment built from alloys of copper and nickel where even though it still reacts with these alloys, it forms a layer of fluoride salt on the surface that protects the metal from further reaction.

Fluorine is such a powerful oxidizing agent that it can convert other elements into unusually high oxidation numbers, as in AgF2, PtF6, and IF7.

Fluorine is used in the manufacture of Teflon or PTFE poly(tetrafluoroethylene), (C2F4)n. Teflon was first prepared in 1938 by accident, since the intended product was a new refrigerant. The first non-stick frying pan was developed in France in 1954 and in the USA in 1961. Another important use is for lining of valves and gaskets that are inert to chemical reactions. This is needed in Uranium enrichment involving UF6.

Natural uranium is 99.284% 238U isotope, with 235U only constituting about 0.711% of its weight. Isotope enrichment of 235U is difficult because the two isotopes have nearly identical chemical properties, and can only be separated gradually using small mass differences. (235U is only 1.26% lighter than 238U). Gaseous diffusion was the first successful technology used to produce enrich uranium by forcing gaseous uranium hexafluoride through semi-permeable membranes. This produced a slight separation between the molecules containing 235U and 238U.

Large amounts of fluorine were consumed each year to make the "Freons" (such as Freon-12, CCl2F2) used in refrigerators. CFCs (chlorofluorocarbons) and HCFCs hydrochlorofluorocarbons) were produced by halogen exchange starting from chlorinated methanes and ethanes. For example, the synthesis of chlorodifluoromethane from chloroform:

2010 marks the year when the production of CFC's is to cease in developing countries, having already been phased out in 2000 in developed countries under the Montreal Protocol, since they are deplete stratospheric ozone. Recycling will then be the only source of CFC's. HCFC's are not regarded as suitable replacements, since although they start degrading before reaching the ozone layer, a proportion still reaches the stratosphere and chlorine buildup was found to be higher than originally predicted. HFC's (hydrofluorocarbons) are considered suitable since they have a shorter lifetime in the lower atmosphere. HFO-1234yf, (CH2=CFCF3) or 2,3,3,3-Tetrafluoropropene is proposed as a refrigerant for automobiles. It has a boiling point of -30 °C.

Fluoridation of water supplies was introduced in many countries in the mid-1900's as a preventative measure against dental decay. The fluorides used include: H2SiF6 and Na2SiF6. Due to the possibility of an increased risk of cancer this practise has been reduced but fluoridation of toothpaste (NaF or monofluorophosphates) has increased as an alternative.

Chlorine (Cl2) is a highly toxic gas with a pale yellow-green color and is a very strong oxidizing agent.

PVC is the third most widely used plastic material in the world, after polyethylene and polypropylene. At the global level, demand for PVC exceeds 35 million tonnes per annum and it is in constant growth (+5% on global average), with higher growth rates in the developing countries. PVC is durable, easy to clean, stain resistant, lightweight, corrosion resistant and needs no maintenance. [7]

Chlorine has been used commercially as a disinfectant and as a bleaching agent. Chlorine was first used as a disinfectant for drinking water in the late 19th century as a means of controlling the spread of water-borne diseases such as typhoid, cholera, dysentery and gastro-enteritis. In the USA in 1900, annual deaths from cholera totalled 25,000 but following the introduction of chlorination, this figure had fallen to fewer than 20 by 1960! In 1991, a misinterpretation of US law resulted in the Peruvian government voluntarily suspending chlorination of water supplies. The resulting cholera epidemic spread to neighbouring countries causing an estimated 1 million cases of cholera and more than 10,000 deaths.[6]

Chemical pulp bleaching aims to remove coloured residual lignin from the pulp and increase its brightness, brightness stability and cleanliness while preserving the strength (cellulose integrity) and carbohydrate yield (cellulose and hemicellulose) of the unbleached fibre, with due regard for potential effects on the environment. [8]

ECF, using ClO2, accounts for 99% of the bleached chemical pulp production in the USA, while dichlorine was essentially phased out in 2001 in compliance with rules from the Environmental Protection Agency. Cl2 was found to contribute to the formation of perchlorodibenzodioxins PCDD and perchlorodibenzofurans PCDF. A number of these are highly toxic, persistent (lasting for years or even decades before degrading into less dangerous forms), highly volatile and liable to accumulate in fatty tissue, hence they are called persistent organic pollutants (POP).

Bromine (Br2) is a reddish-orange liquid with an unpleasant, choking odor. The name of the element is derived from the Greek stem bromos, "stench." Bromine is used to prepare flame retardants, fire-extinguishing agents, sedatives and insecticides.

There are approximately 75 different brominated flame retardants (BFRs) of which Deca-BDE, TBBPA and HBCD are the three main commercial products.
Deca-BDE 1,2,3,4,5-pentabromo-6-(2,3,4,5,6-pentabromophenoxy)benzene is a highly effective brominated flame retardant which is used to prevent fires in plastics for electrical and electronic equipment as well as in contract textiles.
TBBPA 2,2',6,6'-Tetrabromo-4,4'-isopropylidenediphenol is the largest BFR in terms of production. 70% is used as a reacted flame retardant in polymers like epoxy resins in electrical and electronic equipment and 20% is used as an additive to plastics.
HBCD 1,2,5,6,9,10-hexabromocyclododecane has been used for many years mainly in thermal polystyrene insulation foams and applied in the back-coating of textiles for upholstered furniture. [10]

Marine organisms are the main source of naturally occuring organobromine compounds. Perhaps the most famous example and certainly oldest of these is a dyestuff that has been used by humans since the 18th century BC, Tyrian purple. The dye, Tyrian purple - 6,6'-dibromoindigo was extracted from the the marine gastropods Murex brandaris and the purple silks produced were a status symbol of the Byzantium imperial court.

Iodine is an intensely colored solid with an almost metallic luster. The solid is relatively volatile, and it sublimes when heated to form a violet-colored gas. Iodine has been used for many years as a disinfectant in "tincture of iodine." Iodine compounds are used as catalysts, drugs, and dyes. Silver iodide (AgI) played an important role in the photographic process and in attempts to seed clouds to make rain. Iodide is also added to salt to protect against goiter, an iodine deficiency disease characterized by a swelling of the thyroid gland.

Among dyes that have a high iodine content is erythrosine B (food red-colour additive E127 (Federal Food, Drug and Cosmetic Act, Red #3)

More on the Properties of Halogens