This model proposed the Bohr atom, which shows circular orbits surrounding the nucleus. There are four quantum numbers n, l, ml, and ms. The principal quantum number n is a positive integer (1,2,3,4) and it represents the energy of the orbital. The angular momentum quantum number l, is from 0 to n – 1. The l values of 0, 1, 2, and 3 correspond to the s, p, d and f orbitals, respectively. The magnetic quantum number ml ranges from –l to +l. This quantum number dictates the orbital orientation, such as px, py, or pz. The quantum spin number ms, is either +1/2 or -1/2 and it dictates the electron spin. 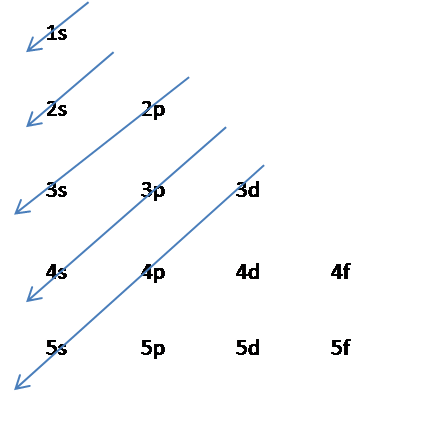 The electron configuration of chromium

Hund’s rule states that when filled sub-levels other than s orbital, electrons must not be spin paired in the orbitals until each orbital contains one electron, and no orbital can have two electrons with the same spin (ms).

Pauli Exclusion Principle states that no two electrons can have the same quantum numbers. An orbital can only hold 0, 1, or 2 electrons. They must have opposite spins if there are 2 electrons in the orbittal.

Valence electron shells in the periodic table follow a trend. This can be referred to as the s block, the p block, the d block and the f block (lanthanides and actinides) meaning that, in its ground state, an element in a certain "block" will have its valence electrons in the s, p, d, or f orbitals depending.

Electron configurations are written using the principal quantum number n, followed by the orbital (s, p, d, or f) with the total number of electrons written as a superscript. Example: 1s2 For writing ground state electron configurations, a few main steps should be followed. What is the electronic configuration of chromium