These homework problems are suggested and will not be turned in for review. However, answers will be available for them the following week by your class TAs. For more homework feel free to go to the Homework page.

Week 4: Coordination Chemistry 2-5, 9-13 and the below additional questions:

2. When silver nitrate is added to a solution of a substance with the empirical formula CoCl3 · 5NH3, how many moles of AgCl will be precipitated per mole of cobalt present? Why?

Cobalt(III) forms an octahedral complex, so must have six ligands. So, the five ammonia groups and one chloride are in the inner sphere, leaving two Cl- to react. So, there are 2 moles of chloride ions per 1 mole of cobalt(III) in solution. These means, assuming silver nitrate is in excess, 2 moles of silver chloride will precipitate.

3. Co(III) occurs in octahedral complexes compounds with the general empirical formula CoClm · nNH3. What values of n and m are possible? What are the values of n and m for the complex that precipitates 1 mole of AgCl for every mole of Co present?

For the second questions. n=4 and m=3. Since only the free Cl- ions will precipitate with AgCl added. The other two Cl- will be bound to the Co and will not precipitate.

4. How many ions per mole will you expect to find in solution when a compound with the empirical formula PtCl4- · 3NH3 is dissolved in water? What about PtCl2 · 3NH3? Draw diagrams of each of the complex cations.

5. Each of the following is dissolved in water to make a 0.001 M solution. Rank the compounds in order of decreasing conductivity of their solutions; K2PtCl6, Co(NH3)6Cl3, Cr(NH3)4Cl3, Pt(NH3)6Cl4. Rewrite each compound by using brackets to distinguish the complex ion present in aqueous solution.

9. How many isomers are there of the compound [Cr(NH3)4Cl2]Cl? Sketch them.

10. Sketch all the geometrical and optical isomers of PtCl2l2(NH3)2. 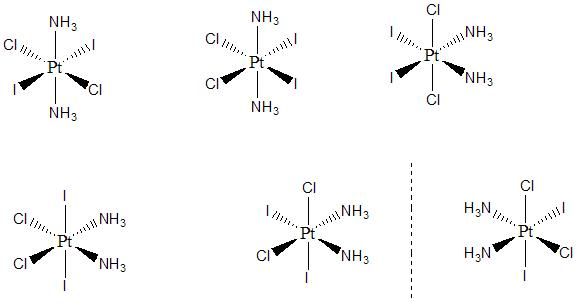 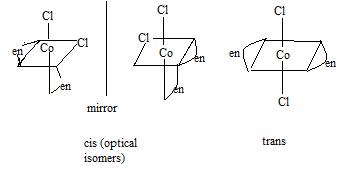 The trans isomer has a plane of symmetry containing both Cl atoms and the Co atom, so it does not exist in a pair of optical isomers.

1. What is the definition of a transition metal?

2. Which of the following statements about transition metals is true?

3. What is the electronic configuration of Cr?

5. In which order are the third and fourth level s, p and electrons filled in?

8. Some transition metals exhibit paramagnetism. What does this mean?

11. Write the electron configurations of the following d-block elements.

12. Transition element and d-block are 2 terms that are easily confused..

13. What are the oxidation states of the transition metal in each of the following compounds?

14. Write the electronic configuration of the following atoms or ions.

15. Describe the bonding in Co(en)33+ in terms of the simplest possible model.

16. List all the isomers of Cr(en)2I2+ and VO(H2O)2I2. You can ignore the structure that internal to ligands.

They will both have cis and trans isomers