Amines can be synthesized through nucleophilic substitution. Using an alkyl halide and the proper nucleophile, the halide can be replaced by an amino group.

If an amide ion were used as the nucleophile, elimination would be a pretty sure thing. An amide ion is even more basic than a hydroxide ion. The nitrogen atom is less electronegative than the oxygen atom of hydroxide. This was the same problem with making alcohols and ethers with hydroxide or alkoxide ions, but now the problem is more severe.

In the case of alcohol and ether syntheses, one approach was to simply use a neutral form of the nucleophile rather than an anion. We could do that in this case. Ammonia still has a lone pair and it is a pretty good nucleophile. We don't need a negative charge on the nitrogen for it to displace a halogen from an alkyl halide.

Because nitrogen is a litle less electronegative than oxygen, ammonia is a better nucleophile than water. This substitution works even better than the substitution of water for a halide. However, there are other problems.

Ammonia is nucleophilic, but it is also basic. That can be helpful. In the synthesis of alcohols and ethers, addition of a neutral nucleophile had to be accompanied by a weak base, otherwise the buildup of acid in the reaction might cause unexpected side reactions, including the breaking of ether linkages that you were trying to make. However, it means that half of the ammonia that you put into the reaction would get used up in acid-base reactions. You would need to add twice as much ammonia as alkyl halide. One molecule of ammonia would act as the nucleophile in each reaction, and one would act as the base.

Remember, the order of steps does matter here. Sure, you could imagine some miniscule equilibrium in which one ammonia has plucked a proton off another, but a quick look at a pKa table tells you that's not very likely. The proton will only be removed after the first ammonia has donated its lone pair and the neutral nitrogen atom becomes part of a much more acidic ammonium ion.

There is another problem, though. Once that ammonium ion has been deprotonated, the nitrogen gets its lone pair back again. It becomes nucleophilic again. Because nitrogen is pretty nucleophilic, there is nothing stopping this newly-formed amine from reacting with another alkyl halide. It will do so, pretty reliably. That will lead to formation of some secondary amine, in addition to the primary amine that you may have been aiming for. A secondary amine has two alkyl groups attached to the nitrogen, rather than just one.

Now, let's think about our ratio again. Suppose we started with that 2:1 ratio of ammonia to alkyl halide, knowing that as soon as a first ammonia molecule bonded with an alkyl, a second ammonia would immediately take a proton. By forming a quaternary ammonium salt, we have actually used up four alkyl halides with one ammonia nucleophile. We have also used up three other ammonia molecules as bases. We have used the reactants up in a 1:1 ratio and we will have half of the ammonia left over.

The point is, formation of these different amines require ratios of ammonia to alkyl halide that are really very similar. Realistically, there is no way we could add these exact ratios of reagents to a reaction and expect things to stop at the right place. Remember, a reaction is taking place with millions of molecules at once, and probability says that all four pathways will be followed by significant fractions of the reactants. All of these ratios of ammonia to alkyl halide will lead to the same thing: a mixture of all possible products. There would invariably be some leftover amine or leftover alkyl halide, too, once the other reagent had run out.

Practically speaking, there are only two products that you can make from this reaction. You could make a primary amine if you used a vast excess of ammonia, so that you ensured that any alkyl halide was much more likely to run into an ammonia molecule long before it ran into an amine molecule.

In this case, you would have leftover ammonia. That should be pretty easy to remove because of its low boiling point.

Alternatively, you could make a quaternary ammonium salt if you used a large excess of alkyl halide.

In this scenario, you would have leftover alkyl halide. The difference in solubility between the alkyl halide and the quaternary ammonium salt could help separate these two materials.

You might recall that in the section on the synthesis of alcohols and ethers, an alternative strategy used a resonance-stabilised, anionic oxygen nucleophile to make alcohols. The same strategy is often used with the synthesis of amines. This approach is called a Gabriel amine synthesis.

The nucleophile in this case is a phthalimide ("FTAL-im-id" or "FTAL-im-eyed") ion. The phthalimide ion is easily formed by a strong base such as potassium hydroxide, becaus the anion obtained is pretty stable. Even though the negative charge is on a nitrogen atom, the two carbonyls serve to delocalise the charge and make this ion less reactive.

However, the phthalimide ion has a spare lone pair. If one of the lone pairs is delocalised, then the other is still available to act as a nucleophile. Both lone pairs cannot be delocalized because they are orthogonal to each other -- that means they are forced to be in different areas of space in order to minimize electron repulsion.

The phthalimide anion is thus able to act as a nucleophile. It can donate to an alkyl halide and displace the halide anion.

The phthalate part of the molecule has now served its purpose. It was just there to deliver the nitrogen in a way that was stable, yet suitably reactive. We can get rid of it now through base-catalysed hydrolysis. Remember, that is a carboxyloid substitution reaction. The resulting phthalate salt is easily removed because of its very different solubility properties.

Provide a mechanism for the hydrolysis of the imide shown above. 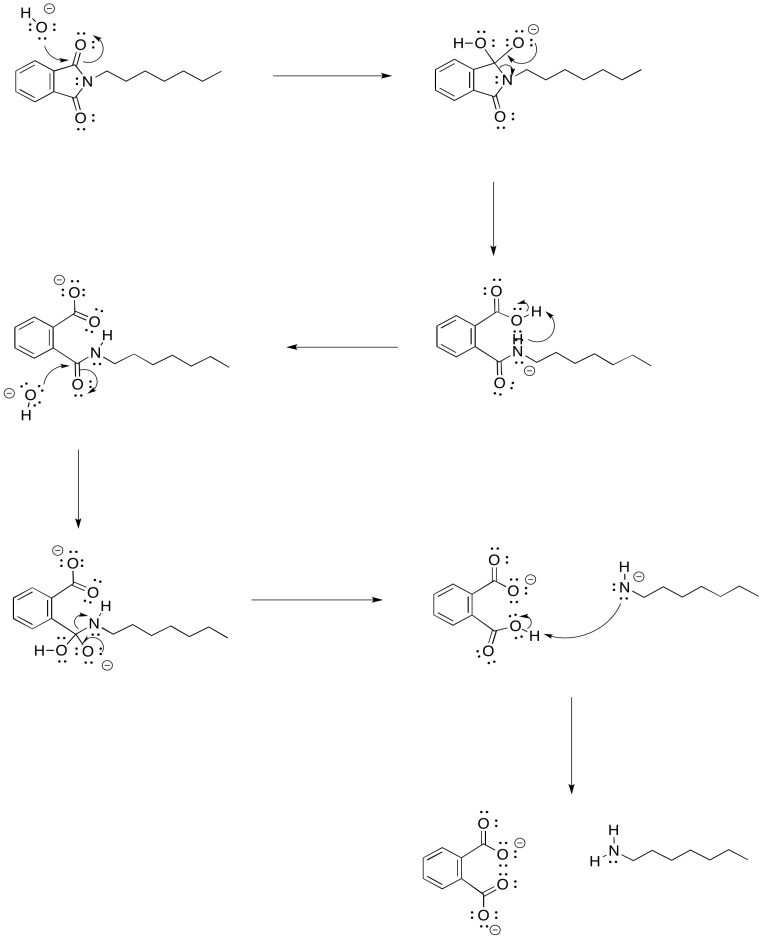 Provide products of the following reactions.

For the reaction of nucleophile with iodomethane in acetone, rank the nucleophiles in order of reactivity (1 = fastest, 3 = slowest).

2 HO- 1 HS- 3 H2O; the anions are more nucleophilic than the neutral, but sulfur is more polarizable than oxygen

2 H2O 3 H3O+ 1 NH3; the neutrals are more nucleophilic than the cation, but nitrogen is less electronegative than oxygen

DNA bases (adenine, guanine, cytosine, and thymidine) contain nucleophilic nitrogen atoms, which is why many halogenated compounds are carcinogenic. Alkylated DNA can still function in its process of replication, though it will do so abnormally, resulting in mutations in the DNA and, ultimately, cancerous cells.

a) Propose a mechanism, with arrows, for the alkylation of guanine:

Damaging DNA via alkylation can also be used to treat cancer. The key is that cancer calls grow and divide more rapidly than normal calls, and thus are more susceptible to mechanisms that damage DNA and impair its functions. Mechlorethamine is one such drug that cross-links DNA.

The mechanism for the activation of mechlorethamine is shown below:

b) Using that step, provide a mechanism, with arrows, for the formation of two cross-linked guanine molecules.

c) What makes the aziridinium ring so electrophilic?