Nucleophiles have the overall effect of adding across the carbonyl group of an aldehyde or ketone. Addition of a proton produces an alcohol. The C=O bond is parlty broken to a C-O bond. In some cases, the C=O bond is completely broken and after several steps the carbonyl oxygen is replaced by some other heteroatom. On the other hand, nucleophiles add to carboxyloids and end up replacing the heteroatom next to the carbonyl. The carbonyl itself remains intact after the reaction is complete.

Note that there is no reason to believe that the initial elementary reaction between a carboxyloid and a nucleophie is any different than that of a simple carbonyl with a nucleophile. An examination of the frontier orbitals in a carboxyloid suggests the pi antibonding level would be the site of population by a nucleophilic lone pair. The carbonyl pi bond would break as the nucleophile approaches.

However, an important feature of carbonyl chemistry is that two heteroatoms on one tetrahedral carbon cannot last. One always pushes the other off. If the former carbonyl oxygen pushes off the nucleophile, the system returns to the starting materials. However, if the former carbonyl oxygen displaces the heteroatomic group next to it, there is an overall change in bonding and a different product is formed. The net result is replacement of the group next to the carbonyl.

The overall result of reaction with a carboxyloid is to displace the heteroatom group next to the carbonyl. This group is typically liberated as an anion.

The electronegativity of the heteroatom attached to the carbonyl group in a carboxyloid is one factor that allows it to leave and form its own stable anion.

Although carbon and hydrogen are more electronegative than many of the elements in the periodic table, they are not stable enough as anions to form easily on their own.

Suggest an order of reactivity for the carboxyloids: rank them from most reactive to least reactive. Provide a reason for your trend.

For the following reactions

a. Draw mechanistic arrows for the nucleophilic addition. Clearly show the tetrahedral structure formed immediately after the nucleophile adds.
b. Determine if a leaving group is present. If so, show the pi donation step and resulting product. If not, draw the product in the neutral form.

When acidic compounds such as HCl are produced in a reaction, the reaction is often followed by treatment with a base that will neutralise the acid. Provide Lewis-Kekule structures of the following bases. 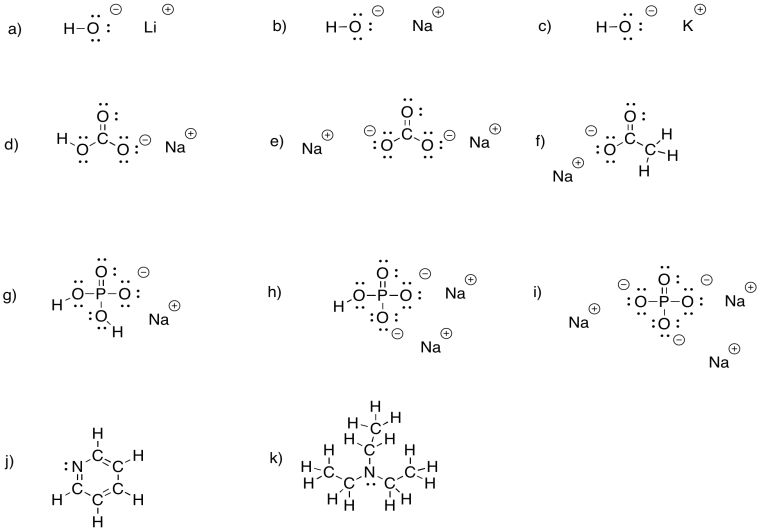