b) As the nickel binds ammonia ligands, it becomes more electronically saturated. That means it becomes less Lewis acidic. It does not have as strong an attraction for additional ligands. In reality, the bite angle for nitrate varies with the complex that is formed, but it is usually somewhere around sixty degrees, whereas oxalate usually gives somewhere around eighty five degrees (see, for example, Alvarez, Chem. Rev. 2015, 115, 13447-13483). The smaller ring size gives a smaller bite angle. Sulfur is larger than oxygen, so its bonds will be a little longer. As a result, you can imagine those two sides of the square being a little longer with sulfur than with oxygen. From the perspective of the metal, the gap between the two donor atoms widens out a little. 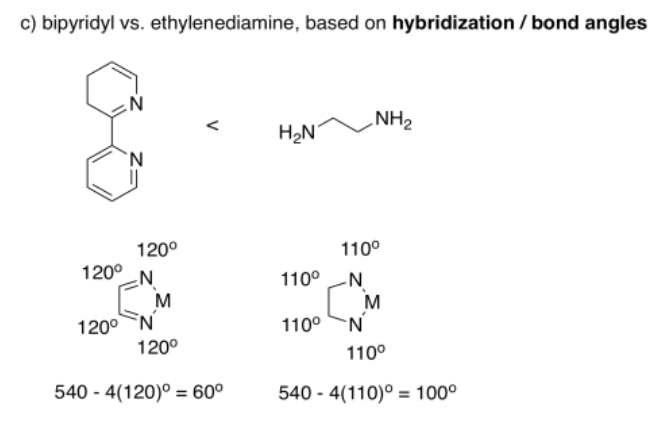 There are lots of differences between these two ligands, but if we simplify and only consider bond angle, we can make a prediction. If the atoms in bipridyl can be considered sp2 hybridised, then they form 120° bond angles. The atoms in ethylenediamine could be considered sp3 hybridised, forming approximately 110° angles. The angle N-M-N still has to complete the shape of the regular pentagon, so if all of the other angles are bigger in the bipyridyl complex, we would expect the bite angle to be smaller. 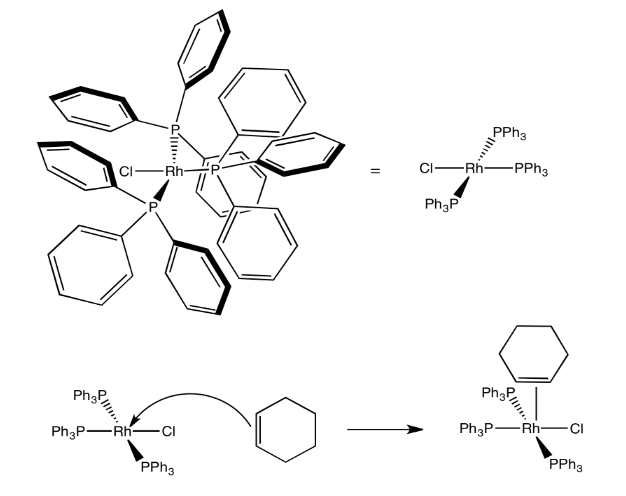 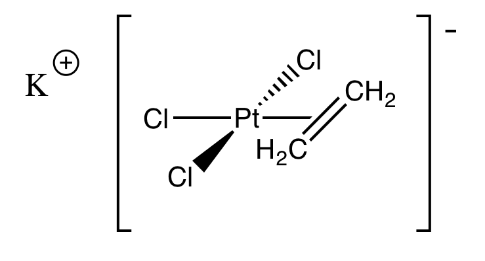 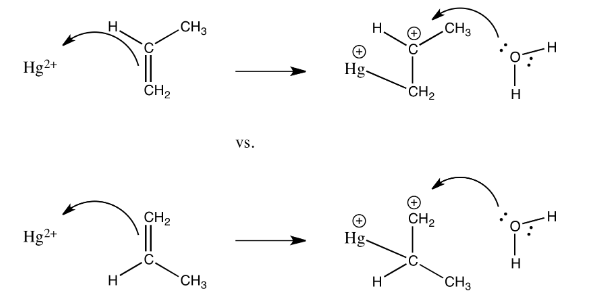 Zr(IV) or Zr4+ has no valence d electrons. That means that, although an alkene could certainly donate its pi bond to the zirconium atom, the zirconium has no electrons with which it can stabilize the alkene complex via "back-donation" to the pi antibonding orbital on the alkene.

Nevertheless, d0 metals such as Zr(IV) and Ti(IV) can be used as alkene polymerization catalysts to make common plastics such as HDPE, LDPE and polypropylene. That means that, although an alkene complex isn't directly observed with these metal ions, these metals can evidently bind alkenes briefly and get them to react with other alkenes to form long chains. Even so, most industrial olefin polymerization catalysts use Ti(III).

We will use (a), the binding constant between Ag(I) and ethylene or ethene (CH2=CH2), as our baseline value. Other constants will be compared with this one in order to look for a trend.

Very often when we see metal ions on paper, we are not dealing with bare metal ions in reality. The ion often has other ligands already attached to it at the beginning, such as water molecules, and what we are sometimes looking at is replacement of an old ligand with a new ligand. Other ligands attached to the silver could make crowding problems even worse.

There is an alternative explanation as well. If you compare two alkenes that differ only in the number of hydrogens attached to the double bond, such as 1-butene, CH2=CHCH2CH3, and 2-butene, CH3CH=CHCH3, you invariably find that the alkene with fewer hydrogens attached to the double bond (and more other stuff) is more stable. "Terminal alkenes", with double bonds at the ends of the chain, are always less stable than "internal alkenes", with double bonds somewhere along the middle of the chain. This difference can be explained by looking at some quantum mechanical calculations, but we're not going to do that right now.

The point is, the difference in this reaction might be caused, not by the alkene complexes, but by the alkenes themselves, on the other side of the reaction profile. It's important to remember that equilibrium constants always compare two sides of a reaction. Ethene, having fewer substituents on the double bond than cis-2-hexene ("substituents" is a four syllable word for "other stuff"), may simply be less stable and more reactive.

Do either of these ideas hold up in the other examples?

In (c), trans-2-hexene is bound even less tightly than cis-2-hexene. We could argue that in a cis-2-hexene complex, the substituents, which are on the same side of the double bond, might both be held away from other ligands on the metal that may exacerbate crowding problems. That would be more difficult to do with trans-2-hexene, since one substituent is on either side of the double bond. Getting one substituent away from the crowding may be possible, but probably not both.

Count on metal, correcting for +2 charge: 6 This problem deals with the "bite angle" of the ligand. Remember, a chain of atoms becomes more flexible the longer it gets, because of the possibility for rotation around each bond along the chain. As the two double bonds move further apart from each other (one bond apart in (a), two bonds apart in (b) and three bonds apart in (c)), the chain can "open up" and bind with a more optimal overlap with the metal.