Lone pairs are the most common electron donors in coordination complexes. Chloride ions, ammonia and phosphines all donate a lone pair to metals to form complexes. Lone pairs are not stabilized by bonding interactions already. Forming a bond lowers the energy of the lone pair electrons. On the other hand, bonding pairs are already lower in energy and so they are less likely to be donated.

However, pi bonds can also donate to Lewis acids. Donation from sigma bonds is still much less likely, though. Sigma bonds are buried between atoms and are hard to reach.

A simple example of donation from a pi bond is the treatment of silver(I) salts with alkenes, shown in figure \(\PageIndex{1}\).

Strictly speaking, if an alkene donates its pi bonding electrons to a metal, we might draw it as shown in Figure CC4.2. The electrons are shared between two carbon atoms in the alkene. Since a bond is generally thought of as a pair of electrons shared between two atoms, then once the pi electrons are donated to the metal, they are shared between the metal and one of the carbons, but not both. If you are keeping track of electrons carefully, that leaves one of the carbons short on electrons. It must be a cation. Of course, either carbon could be the cationic one, so we can draw resonance structures showing both possible states.

However, if a metal has valence electrons of its own, it could donate these electrons back to the "cation" that is forming on one of the alkene carbons. The alkene complex can be thought of as a "metallacycle" or a "metallacyclopropane", a three-membered ring containing two carbons and the transition metal atom.

The idea of back-donation is also supported from a molecular orbital point of view. The alkene pi bond can donate electrons into an empty orbital on the metal, such as a p orbital. In turn, an occupied metal d orbital has the correct symmetry to overlap with a pi* orbital on the alkene. In doing so, we would think of the pi bond as breaking. We would also think of two pairs of bonding electrons between the metal and alkenes. This situation fits the picture of a metallacyle pretty well.

Remember that formalisms can be complicated in coordination complexes. For one thing, we do not usually draw positive formal charges on the donor atom or negative formal charges on the metal atom in the complex (unless specifically illustrating a point). In alkene complexes, bonding is usually illustrated with a line between the pi bond and the metal, as in Figure CC4.5. That line could be read as a pair of electrons, but it isn't, really. The pair of electrons is in the pi bond. They are being shared with the metal.

Alkene binding is one of the first steps performed by hydrogenation catalysts such as Wilkinson's catalyst, which catalyze the addition of dihydrogen across an alkene double bond to form an alkane. Show, with arrows, the coordination of cyclohexene to Wilkinson's catalyst, (PPh3)3RhCl. The first example of an alkene coordinated to a transition metal was prepared by pharmaceutical chemist W. C. Ziese at the University of Copenhagen in 1827. Its structure was confirmed by x-ray diffraction about a century later. Its formula is K[PtCl3(CH2CH2)]. Draw the structure. 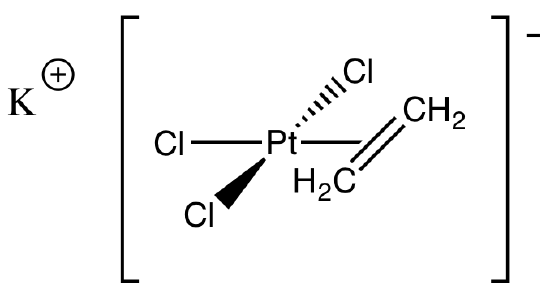 Treatment of alkenes with Hg(II) in water results in addition of a solvent molecule (a nucleophile) to one end of the "activated" alkene. Draw, with arrows, the mechanism for the formation of a hydroxyethylmercury ion, HgCH2CH2OH+, from ethene under these conditions.

Treatment of 2-methylpropene with Hg(II) in water results in formation of the ion, HgCH2C(CH3)2OH+. A second product of solvent addition is possible, but is not observed. Show the other possible product and provide a possible explanation for the selectivity of the reaction. Zr(IV) or Zr4+ has no valence d electrons. That means that, although an alkene could certainly donate its pi bond to the zirconium atom, the zirconium has no electrons with which it can stabilize the alkene complex via "back-donation" to the pi antibonding orbital on the alkene.

Nevertheless, d0 metals such as Zr(IV) and Ti(IV) can be used as alkene polymerization catalysts to make common plastics such as HDPE, LDPE and polypropylene. That means that, although an alkene complex isn't directly observed with these metal ions, these metals can evidently bind alkenes briefly and get them to react with other alkenes to form long chains. Even so, most industrial olefin polymerization catalysts use Ti(III).

Alkynes can also coordinate to metal atoms. Draw the molecular orbitals involved in:

a) alkyne donation to the metal

b) metal donation to the alkyne

Explain the differences seen in the equilibrium constants for the formation of silver(I) complexes with the following alkenes:

We will use (a), the binding constant between Ag(I) and ethylene or ethene (CH2=CH2), as our baseline value. Other constants will be compared with this one in order to look for a trend.

Very often when we see metal ions on paper, we are not dealing with bare metal ions in reality. The ion often has other ligands already attached to it at the beginning, such as water molecules, and what we are sometimes looking at is replacement of an old ligand with a new ligand. Other ligands attached to the silver could make crowding problems even worse.

There is an alternative explanation as well. If you compare two alkenes that differ only in the number of hydrogens attached to the double bond, such as 1-butene, CH2=CHCH2CH3, and 2-butene, CH3CH=CHCH3, you invariably find that the alkene with fewer hydrogens attached to the double bond (and more other stuff) is more stable. "Terminal alkenes", with double bonds at the ends of the chain, are always less stable than "internal alkenes", with double bonds somewhere along the middle of the chain. This difference can be explained by looking at some quantum mechanical calculations, but we're not going to do that right now.

The point is, the difference in this reaction might be caused, not by the alkene complexes, but by the alkenes themselves, on the other side of the reaction profile. It's important to remember that equilibrium constants always compare two sides of a reaction. Ethene, having fewer substituents on the double bond than cis-2-hexene ("substituents" is a four syllable word for "other stuff"), may simply be less stable and more reactive.

Do either of these ideas hold up in the other examples?

In (c), trans-2-hexene is bound even less tightly than cis-2-hexene. We could argue that in a cis-2-hexene complex, the substituents, which are on the same side of the double bond, might both be held away from other ligands on the metal that may exacerbate crowding problems. That would be more difficult to do with trans-2-hexene, since one substituent is on either side of the double bond. Getting one substituent away from the crowding may be possible, but probably not both.