Sometimes there is more than one way to connect a given group of atoms into a molecular structure. Given the formula C2H6O, two different isomers are possible: methyl ether and ethanol. They have the same formula but different structures. The word, "isomer", is from the Greek, meaning "same things", referring to their identical content. However, isomers often have very different physical and biological properties.

These two compounds have different physical properties, as you can see in the table below.

Why is that? What is the origin for the differences in physical properties between these two, similar compounds, one of which is a gas at room temperature while the other is a liquid? Both contain carbon-hydrogen and carbon-oxygen bonds. The ethanol also contains a carbon-carbon bond and an oxygen-hydrogen bond.

Certain bonds, or groups of bonds, confer specific behaviors on the compounds in which they are found. For instance, when an OH group is found in an organic compound, it can make the compound moderately acidic. It also makes the compound a little more likely to be a solid or liquid rather than a gas. Why?

In dimethyl ether, on the other hand, hydrogen bonding is not a factor. In this molecule, the major intermolecular attraction involves regular dipole moments. Because hydrogen bonds are typically much stronger attractions than ordinary dipole moments, a group of ethanol molecules is much harder to separate from each other than a group of dimethyl ether molecules. The ethanol has a much higher boiling point.

Compounds don't really have to be isomers in order to compare them in this way. They just have to be similar enough that we can reasonably compare them.

Different collections of bonds that are commonly found in organic compounds are referred to as functional groups. Functional groups influence the physical properties of the compounds in which they are found. They can also influence the biological activity of a compound; that is, they can help determine whether a compound might be active as a specific type of drug, a hormone, or other types of compounds that regularly interact with organisms in nature.

Another example of isomers is found by looking at the formula C3H9N. This time there are three different structures that can occur with the given formula. All three isomers contain the "amine" functional group. An amine is just a nitrogen connected to a mixture of carbons and hydrogens. Again, the three isomers have different properties, and these differences are not just restricted to melting points and boiling points. What factor do you think is responsible for these differences.

Unlike alcohols and ethers, whether or not an amine contains an N-H does not change the name of the functional group. It is still called an amine. That may be an unfortunate artifact of history, because clearly an amine that can hydrogen bond is a little different from an amine that cannot, in just the same way that an alcohol is different from an ether. To compensate for that lack of distinction between amines, an additional adjective is used to describe them. An amine in which the nitrogen is attached to only one carbon and two hydrogens is called a "primary amine" (primary means one, as in one carbon attachment). An amine in which the nitrogen is attached to two carbons and one hydrogens is called a "secondary amine" (secondary means attachment to two carbons). An amine in which the nitrogen is attached to three carbons and no hydrogens is called a "tertiary amine" (attachment to three carbons).

Isomers have a variety of properties that are different from the properties of other members of their group. Not all of these properties can be easily explained by looking at different structures, but some can. The density of a material is the ratio of its weight to its volume (in more "scientific" language: mass/volume). A material with a higher density than another can be thought of as having the same weight, but shrunken to a smaller volume. Alternatively, it could be thought of as having the same volume, but packed full of more mass.

Note that the isomers in the table above have different densities. The densities in the table refer to liquid densities. Despite their similarities, the three compounds in the liquid state pack together a little differently. That, too, is a result of structural differences.

Temperature is a measure of how much energy is available in the environment. As temperature increases, molecules obtain more energy and they transfer that energy into a variety of molecular motions. As they move around more, they are less able to remain densely packed. The density decreases as the temperature goes up. Conversely, things tend to shrink as they cool, because molecules slow down and begin to pack more tightly. They become more dense.

Viscosity refers to the resistance to flow in a liquid. The higher the viscosity of a liquid, the more slowly it flows. Maple syrup is more viscous than water, but honey is more viscous than maple syrup. In a simplified way, we can think of molecules clinging to their neighbors as they flow past each other, hindering flow and increasing viscosity. Thus, the intermolecular attractions between molecules in a liquid affect its viscosity.

It's a little like a group of friends rushing down a crowded street in Manhattan. If they all hold hands, they don't make as rapid progress as they would individually. Individually, each member of the group is able to step aside, dart forward and get past the oncoming pedestrians. Clinging together, they all have to turn, come to a halt and wait for people to let them past.

Surface tension is a measure of how strongly a liquid resists external forces. You might think of it as how tightly the molecules in a material cling to each other when given the chance to cling to something else instead.

The most familiar picture of surface tension is a drop of water. Water forms drops because the molecules in the water cling to each other more strongly than they do to the molecules in the air. Those are mostly nitrogen molecules, N2, with a significant fraction of oxygen molecules, O2. The molecules in the air are quite non-polar, because they are made of the same kinds of atoms: two nitrogens, for instance. There is no electronegativity difference that would impart a dipole to the molecule. That's in stark contrast to a highly polar water molecule; it's hard to find molecules more polar than that. If a water molecule were to interact with a molecule of dinitrogen, it would be trading in some strong hydrogen bonds with other molecules. That wouldn't be worth it.

Explain the differences in the vapour pressures of the following compounds (listed in hectoPascals, hPa).

Acetic acid posesses hydrogen bonding capability, whereas 2-propanone has the ability to form only dipole-dipole interactions. Thus, 2-propanone molecules are not held in the liquid phase as strongly as acetic acid, and the former compound has a higher vapour pressure.

The C=O bond of ethyl acetate has a substantial dipole, but the dipoles in ether don't add up to very much; they are smaller to begin with and they partially cancel out via vectorial addition. Ether molecules can escape the liquid more easily, resulting in a higher vapour pressure.

Both molecules are limited to relatively weak London dispersion interactions. Because heptane forms a longer chain than pentane, there will be a slightly greater interaction between heptane molecules than between pentane molecules. Pentane thus has the higher vapour pressure.

Explain the differences in the viscosities of the following compounds (listed in centiPoise, cP, or milliPascal-seconds, mPa.s).

The C=O bond 2-butanone has a substantial dipole, but the dipoles in ether don't add up to very much; they are smaller to begin with and they partially cancel out via vectorial addition. The 2-butanone molecules cling together more strongly, resulting in a higher viscosity.

Both molecules are limited to relatively weak London dispersion interactions. Because decane forms a longer chain than hexane, there will be a slightly greater interaction between decane molecules than between hexane molecules. Decane thus has the higher viscosity. Later, if you study macromolecules, you will see that in very, very long chains, "entanglement" becomes a factor as well. Just as the name implies, really long chains get tangled up together and have a difficult time moving past each other; that's why materials like cooking oil and motor oil are so viscous.

The 1-butanol can hydrogen bond together, but the ether only has weak dipole-dipole interactions. The 1-butanol is therefore more viscous.

Explain the differences in the surface tensions of the following compounds (listed in dynes/cm).

The 1-butanol can hydrogen bond together, but the ether only has weak dipole-dipole interactions. The 1-butanol therefore has greater surface tension.

The formamide has N-H bonds and so it is capable of hydrogen bonding. Despite having a pretty darned big dipole, the nitromethane can't really hydrogen bond together. The formamide therefore has greater surface tension.

You don't have to have data in front of you to compare two compounds' properties. At least to some extent, you may be able to look at two similar structures and make an educated guess about which one will melt or evaporate more readily than the other, provided they have different functional groups that you can compare. Knowing something about structure has explanatory value; you can explain differences based on structure. It also has predictive value: you can predict differences based on structure.

In the following pairs of isomers, which one would be expected to have the highest boiling point?

2-propenol. It has hydrogen bonding capability but propanal does not.

heptanoic acid. It has hydrogen bonding capability but ethyl pentanoate does not.

1-hexen-3-one. Its dipole is greater than that in the ether, because it comes from a C=O bond rather than C-O bonds.

In the following pairs of isomers, which one would be expected to have the highest viscosity?

2-butanone. Its dipole is greater than that in the ether, because it comes from a C=O bond rather than C-O bonds.

octane. It has greater London dispersion interactions that pentane because of the greater surface contact area in octane.

1,3-butanediol. It has hydrogen bonding but the DME does not.

In each of the following questions, you have a choice between A and B. Choose which option in which stronger attractions are present. 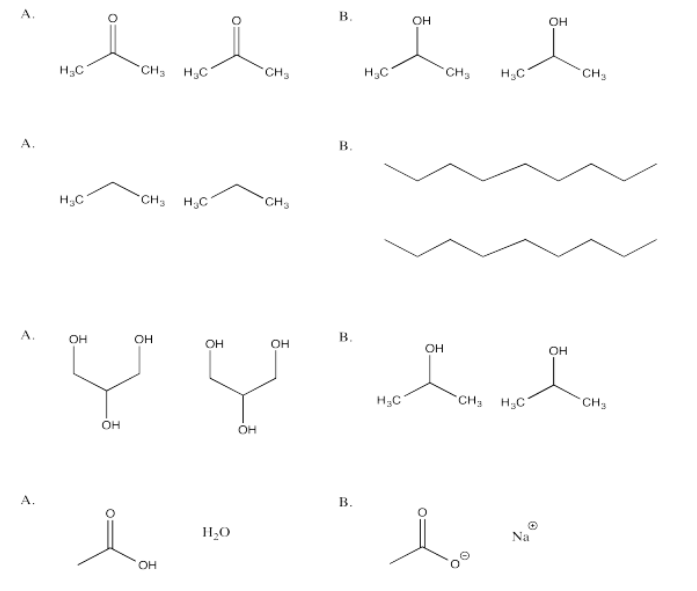