Through examples found in the sections on acids and bases proton-transfer processes are broken into two hypothetical steps: (1) donation of a proton by an acid, and (2) acceptance of a proton by a base. (Water served as the base in the acid example and as the acid in the base example [amphiprotic]). The hypothetical steps are useful because they make it easy to see what species is left after an acid donated a proton and what species is formed when a base accepted a proton. We shall use hypothetical steps or half-equations in this section, but you should bear in mind that free protons never actually exist in aqueous solution.

Suppose we first consider a weak acid, the ammonium ion. When it donates a proton to any other species, we can write the half-equation:

But NH3 is one of the compounds we know as a weak base. In other words, when it donates a proton, the weak acid NH4+ is transformed into a weak base NH3. Another example, this time starting with a weak base, is provided by fluoride ion:

The submicroscopic representation above shows how the addition of a proton to fluoride converts a weak base (F- in green) into a weak acid (HF). 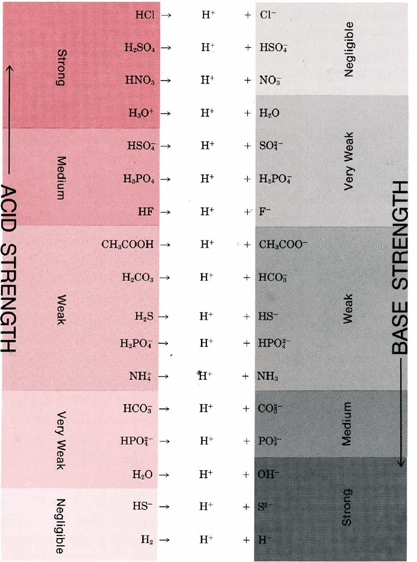 Table \(\PageIndex{1}\) gives a list of some of the more important conjugate acid-base pairs in order of increasing strength of the base. This table enables us to see how readily a given acid will react with a given base. The reactions with most tendency to occur are between the strong acids in the top left-hand comer of the table and the strong bases in the bottom right-hand comer.

If a line is drawn from acid to base for such a reaction, it will have a downhill slope. By contrast, reactions with little or no tendency to occur (between the weak acids at the bottom left and the weak bases at the top right) correspond to a line from acid to base with an uphill slope. When the slope of the line is not far from horizontal, the conjugate pairs are not very different in strength, and the reaction goes only part way to completion. Thus, for example, if the acid HF is compared with the base CH3COO–, we expect the reaction to go part way to completion since the line is barely downhill.

A strong acid like HCl donates its proton so readily that there is essentially no tendency for the conjugate base Cl– to reaccept a proton. Consequently, Cl– is a very weak base. A strong base like the H– ion accepts a proton and holds it so firmly that there is no tendency for the conjugate acid H2 to donate a proton. Hence, H2 is a very weak acid.

Write a balanced equation to describe the reaction which occurs when a solution of potassium hydrogen sulfate, KHSO4, is mixed with a solution of sodium bicarbonate, NaHCO3.

The Na+ ions and K+ ions have no acid-base properties and function purely as spectator ions. Therefore any reaction which occurs must be between the hydrogen sulfate ion, HSO4– and the hydrogen carbonate ion, HCO3–. Both HSO4– and HCO3– are amphiprotic, and either could act as an acid or as a base. The reaction between them is thus either

Table \(\PageIndex{1}\) tells us immediately that the second reaction is the correct one. A line drawn from HSO4– as an acid to HCO3– as a base is downhill. The first reaction cannot possibly occur to any extent since HCO3– is a very weak acid and HSO4– is a base whose strength is negligible

What reactions will occur when an excess of acetic acid is added to a solution of potassium phosphate, K3PO4?

The line joining CH3COOH to PO43– in Table \(\PageIndex{1}\) is downhill, and so the reaction

should occur. There is a further possibility because HPO42– is itself a base and might accept a second proton. The line from CH3COOH to HPO42– is also downhill, but just barely, and so the reaction

can occur, but it does not go to completion. Hence double arrows are used. Although H2PO4– is a base and might be protonated to yield phosphoric acid, H3PO4, a line drawn from CH3COOH to H2PO4– is uphill, and so this does not happen.