Make sure you thoroughly understand the following essential ideas which have been presented above. It is especially imortant that you know the precise meanings of all the green-highlighted terms in the context of this topic.

On this page we extend the concept of differential rate laws introduced on the previous page to integral rate laws and reaction half-life that are of great importance in most practical applications of kinetics.

Measuring instantaneous rates as we have described on the previous page of this unit is the most direct way of determining the rate law of a reaction, but is not always convenient, and it may not even be possible to do so with any precision.

The ordinary rate law (more precisely known as the instantaneous or differential rate law) tells us how the rate of a reaction depends on the concentrations of the reactants. But for many practical purposes, it is more important to know how the concentrations of reactants (and of products) change with time. For example, if you are carrying out a reaction on an industrial scale, you would want to know how long it will take for, say, 95% of the reactants to be converted into products.

This is the purpose of an integrated rate law.

This is easy to do, but only some courses expect you to know how to do it. For a quick run-through, click here. If you have had even a bit of calculus, here is an opportunity to put it to use!

Expressing the "speed" of a reaction: the half-life

How long does it take for a chemical reaction to occur under a given set of conditions? As with many "simple" questions, no meaningful answer can be given without being more precise. In this case,

How do we define the point at which the reaction is "completed"?

A reaction is "completed" when it has reached equilibrium — that is, when concentrations of the reactants and products are no longer changing. If the equilibrium constant is quite large, then the answer reduces to a simpler form: the reaction is completed when the concentration of a reactant falls to zero. In the interest of simplicity, we will assume that this is the case in the remainder of this discussion.

"How long?" may be too long

If the reaction takes place very slowly, the time it takes for every last reactant molecule to disappear may be too long for the answer to be practical. In this case, it might make more sense to define "completed" when a reactant concentration has fallen to some arbitrary fraction of its initial value — 90%, 70%, or even only 20%.

The particular fraction one selects depends on the cost of the reactants in relation to the value of the products, balanced against the cost of operating the process for a longer time or the inconvenience of waiting for more product. This kind of consideration is especially imporant in industrial processes in which the balances of these costs affect the profitability of the operation.

The half-life of a reaction

The law of exponential change

The rate at which a reactant is consumed in a first-order process is proportional to its concentration at that time. This general relationship, in which a quantity changes at a rate that depends on its instantaneous value, is said to follow an exponential law.

Exponential relations are widespread in science and in many other fields. Consumption of a chemical reactant or the decay of a radioactive isotope follow the exponential decay law. Its inverse, the law of exponential growth, describes the manner in which the money in a continuously-compounding bank account grows with time, or the population growth of a colony of reproducing organisms.

The reason that the exponential function y=ex so efficiently describes such changes stems from the remarkable property that dy/dx = ex; that is, ex is its own derivative, so the rate of change of y is identical to its value at any point. A nice discussion of this property can be found here .

The integrated rate law for a first-order reaction

is a common example of the law of exponential change. For a reactant A, its concentration [A]t at time t is given by

in which [A]o is its initial concentration and k is the first-order rate constant.

The "e" in the exponential term is of course the base of the natural logarithms, and the negative sign in its exponent means that the value of this term diminishes as t increases, as we would expect for any kind of a decay process.

A more convenient form of the integrated rate law is obtained by taking the natural logarithm of both sides:

This has the form of an equation for a straight line

in which the slope m corresponds to the rate constant k. This means that, for a first-order reaction, a plot of ln [A] as a function of time gives a straight line with a slope of –k.

After a period of one half-life, t = t½ and we can write

(in which we express the exponential as a function in order to make it stand out more prominently.) Taking logarithms of both sides (remember that
ln ex = x) yields

Solving for the half-life, we obtain the simple relation

which tells us that the half-life of a first-order reaction is a constant. This means that 100,000 molecules of a reactant will be reduced to 50,000 in the same time interval needed for ten molcules to be reduced to five. 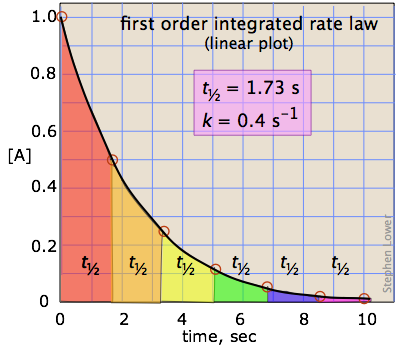 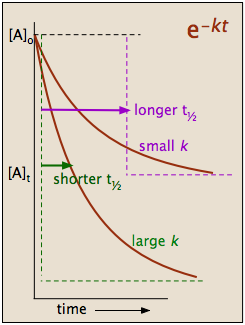 It should be clear that the rate constant and the half life of a first-order process are inversely related.

The half-life of a first-order reaction was found to be 10 min at a certain temperature. What is its rate constant in reciprocal seconds?

The decay of radioactive nuclei is always a first-order process.

The mass-241 isotope of americium, widely used as an ionizing source in smoke detectors, has a half-life of 432 years.

a) What fraction of the Am241 in a smoke detector will have decayed after 50 years?

b) How long will it take for the activity to decline to 80% of its initial value?

Integration of the second-order rate law

which is easily rearranged into a form of the equation for a straight line (try showing this yourself!) and yields plots similar to the one shown on the left below.

The half-life is given by

In some reactions, the rate is apparently independent of the reactant concentraton, in which case 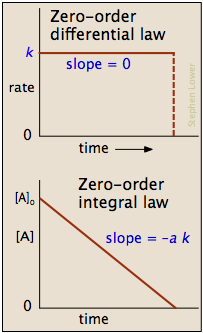 Clearly, a zero-order process cannot continue after a reactant has been exhausted. Just before this point is reached, the reaction will revert to another rate law instead of falling directly to zero as depicted at the upper left.

There are two general conditions that can give rise to zero-order rates:

This situation commonly occurs when a reaction is catalyzed by attachment to a solid surface (heterogeneous catalysis) or to an enzyme.

For example, the decomposition of nitrous oxide

in the presence of a hot platinum wire (which acts as a catalyst) is zero-order, but it follows more conventional kinetics when carried out entirely in the gas phase.

In this case, the N2O molecules that react are limited to those that have attached themselves to the surface of the solid catalyst. Once all of the sites on the limited surface of the catalyst have been occupied, additional gas-phase molecules must wait until the decomposition of one of the adsorbed molecules frees up a surface site.

Enzyme-catalyzed reactions in organisms begin with the attachment of the substrate to the active site on the enzyme, leading to the formation of an enzyme-substrate complex. If the number of enzyme molecules is limited in relation to substrate molecules, then the reaction may appear to be zero-order.

This is most often seen when two or more reactants are involved. Thus if the reaction

is first-order in both reactants so that

then if B is present in great excess, the reaction will appear to be zero order in B (and first order overall). This commonly happens when B is H2O and the reaction is carried out in aqueous solution.

The following table compares the rate parameters of zero-, first-, and second-order reactions of the form aA → products. See also this excellent page from Purdue University that shows plots of [A], ln [A], and 1/[A] for each reaction order.