The use of food by organisms is termed nutrition. Vitamins and minerals necessary for biochemical processes. There are three general categories of food: (1) Essential fiber which are non-digestible polysaccharide material, essential for normal functioning of animal digestive systems (i.e. colon), (2) Energy-yielding nutrients which are protein, carbohydrate and lipid and (3) Micronutrients.

Protein is an important source of nitrogen in the diet. Protein within the body is constantly turning over (i.e. being degraded and resynthesized). Furthermore, there is a general demand for protein synthesis when an organism is growing. The Nitrogen Balance refers to the relationship between the supply and demand for nitrogen (i.e. protein) within an organism.

Carbohydrates are also an essential structural component of nucleic acids, nucleotides, glycoproteins and glycolipids. However, the principle role of carbohydrate in the diet is production of metabolic energy.

Fatty acids and triacylglycerols can be used as fuel by many tissues in the human body. Phospholipids are essential components of all biological membranes

"Dietary fiber" refers to molecules that cannot be broken down by enzymes in the human body.

Vitamins are essential nutrients that are required in the diet because they cannot be synthesized by human metabolic enzymes. Often, only trace levels are required, but a shortage can result in disease or death.

Vitamin B1: Thiamine and thiamine pyrophosphate

Thiamine is the precursor of thiamine pyrophosphate (TPP): Riboflavin is a constituent of riboflavin 5'-phosphate (flavin mononucleotide, or FMN) and flavin adenine dinucleotide (FAD). The nucleotide part of the molecule does not enter into any chemistry, but is important for recognition and binding to enzymes that will use FMN or FAD as a cofactor. 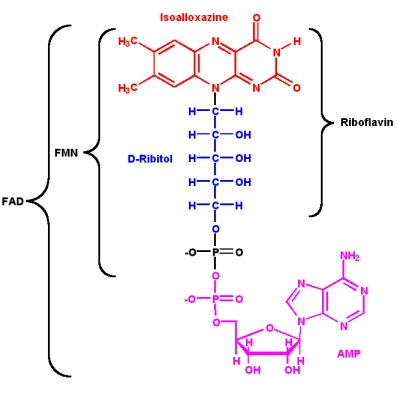 The isoalloxazine ring is the core structure of the different flavin molecules. It is yellow in color and the word "flavin" is derived from the latin word for yellow, flavus. Vitamin B3: pantothenic acid and coenzyme A

Pantothenic acid is a component of coenzyme A (CoA). The two main functions of CoA are:

a-hydrogen of the acyl group for removal as a proton Vitamin B6: Pyridoxine and pyridoxal phosphate

The biologically active form of vitamin B6 is pyridoxal-5-phosphate (PLP), however, the nutritional requirements can be met by either pyridoxine, pyridoxal or pyridoxol.

PLP participates in a wide variety of reactions involving amino acids, including:

These involve bonds to the amino acid Ca as well as side chain carbons. The wide variety of reactions is due to the ability of PLP to form stable Schiff base adducts with a-amino groups of amino acids: Vitamin B12 is not made by any animal or plant, it is produced by only a few species of bacteria. Once in the food chain, vitamin B12 is obtained by animals by eating other animals, but plants are sadly deficient. Therefore, herbivorous animals (and vegetarians) can suffer a deficiency. The structure contains a cobalt ion, coordinated within a corrin ring structure: Vitamin B12 (cyanocobalamin) is converted in the body into two coenzymes: Vitamin B12 coenzymes participate in three types of reactions:

L-Ascorbate is a reducing sugar (has a reactive ene-diol structure) that is involved in the following biochemical processes:

Almost all animals can synthesize vitamin C (its in the pathway of carbohydrate synthesis). Humans and great apes have suffered a mutation in the last enzyme in the pathway of synthesis for L-ascorbate (mutation occurred about 10-40 million years ago). Since that time, all great apes (of which humans are a member) must get L-ascorbate from their diet (fresh fruits and vegetable contain an abundance). Thus, for the great apes L-ascorbate is a "vitamin" (another way of looking at it is that all great apes suffer an in-born error in metabolism). Humans still have the gene for the enzyme to make vitamin C. However, it has suffered a couple of deletions that introduce a frame shift mutation, in addition to numerous point mutations.

Biotin acts as a mobile carboxyl group carrier in a variety of enzymatic carboxylation reactions.

Lipoic acid contains two sulfur atoms that can exist as a disulfide bonded pair, or as two free sulfhydrils. Conversion between the two forms involves a redox reaction (the two free sulfhydrils represent the reduced form). Lipoic acid is typically found covalently attached to a lysine side chain in enzymes that use it as a cofactor, as a lipoamide complex. Folic acid derivatives (i.e. "folates") are acceptors and donors of one-carbon units for all oxidation levels of carbon (except for the most oxidized form - CO2. See biotin above). Cholecalciferol is produced in the skin of animals by the action of U.V. light on the precursor molecule 7-dehydrocholesterol.

a-Tocopherol is a potent antioxidant, however, molecular details of its function are not clearly understood.

Vitamin K is essential to the blood-clotting process. Vitamin K is required for the post-translational modification to produce g-carboxy glutamic acid from glutamic acid. Such modified residues can bind Ca2+, which is an essential part of the process in the clotting cascade.

g-carboxy glutamic acids in their structure