Oxidation state is a number assigned to an element in a compound according to some rules. This number enable us to describe oxidation-reduction reactions, and balancing redox chemical reactions. When a covalent bond forms between two atoms with different electronegativities the shared electrons in the bond lie closer to the more electronegative atom:

Oxidation state (or oxidation numbers) do not refer to real charges on the atoms, except in the case of actual ionic substances. Oxidation numbers can be determined using the following rules:

The oxidation state (OS) of an element corresponds to the number of electrons, e-, that an atom loses, gains, or appears to use when joining with other atoms in compounds. In determining the OS of an atom, there are seven guidelines to follow:

(Note: The sum of the OSs is equal to zero for neutral compounds and equal to the charge for polyatomic ion species.)

Figure 20.1.1: Example of nomenclature based on oxidation states.

An oxidation-reduction (redox) reaction is a type of chemical reaction that involves a transfer of electrons between two species. An oxidation-reduction reaction is any chemical reaction in which the oxidation number of a molecule, atom, or ion changes by gaining or losing an electron. Redox reactions are common and vital to some of the basic functions of life, including photosynthesis, respiration, combustion, and corrosion or rusting.

Redox reactions are comprised of two parts, a reduced half and an oxidized half, that always occur together. The reduced half gains electrons and the oxidation number decreases, while the oxidized half loses electrons and the oxidation number increases. Simple ways to remember this include the mnemonic devices OIL RIG, meaning "oxidation is loss" and "reduction is gain," and LEO says GER, meaning "loss of e- = oxidation" and "gain of e- = reduced." There is no net change in the number of electrons in a redox reaction. Those given off in the oxidation half reaction are taken up by another species in the reduction half reaction. 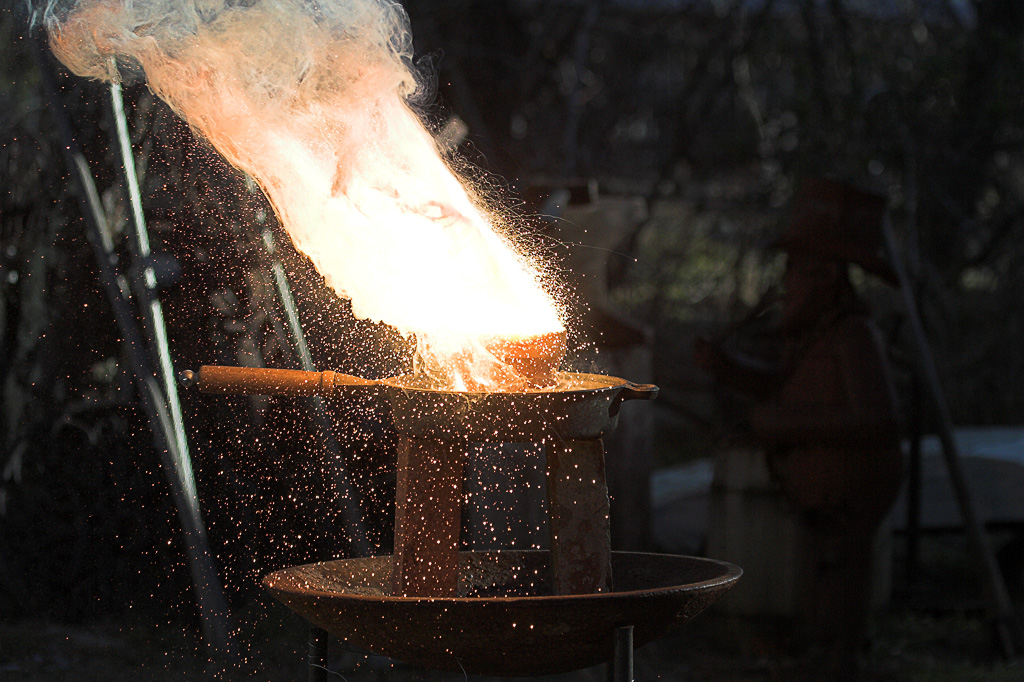 A good example of a redox reaction is the thermite reaction, in which iron atoms in ferric oxide lose (or give up) O atoms to Al atoms, producing \(Al_2O_3\) (Figure 20.1.1).

Another example of the redox reaction is the reaction between zinc and copper sulfate.

A decomposition reaction is the reverse of a combination reaction, the breakdown of a chemical compound into individual elements:

Combustion reactions almost always involve oxygen in the form of O2, and are almost always exothermic, meaning they produce heat. Chemical reactions that give off light and heat and light are colloquially referred to as "burning."

Although combustion reactions typically involve redox reactions with a chemical being oxidized by oxygen, many chemicals "burn" in other environments. For example, both titanium and magnesium burn in nitrogen as well:

Moreover, chemicals can be oxidized by other chemicals than oxygen, such as Cl2 or F2; these processes are also considered combustion reactions

Where n is the number of electrons transferred. Disproportionation reactions do not need begin with neutral molecules, and can involve more than two species with differing oxidation states (but rarely).