[Before starting this exercise students should understand the basics of GC and LC separations and have had a brief introduction into mass spectrometry, including instrument design (basic block diagram), ionization sources (EI and ESI), and simple quadrupole or magnetic sector mass analyzers.]

[Build molecules out of large LEGO™ (“Duplo”) bricks or an equivalent snap together building brick (see configurations below). Add one “charge” (round drafting sticker) to a single exterior brick of each molecule; vary the charge placement on each molecule.]

[Use duct tape to create large axes (retention time vs. mass) on the floor of the space where you will “fragment” the Duplo molecules. The space should ideally have enough room for all the students in your class to view and walk around the plot they will create on the floor. Label the axes with a permanent marker. The time axis can simply indicate the direction of increasing retention time. The mass axis should include numbers from 1 to 16.] After completing these exercises, you will be able to…

[Set aside ~45 minutes of class time. Exercise 1 works well as an in-class activity; alternatively, it may be used as an exercise directly preceding a laboratory period focused on mass spectrometry.]

Within your group of three, assign and distribute a different color (RED, BLUE, YELLOW) “Duplo” molecule to each person. [If extra molecules are available, it may be helpful to give each group one extra molecule of each color to use as reference when figuring out how each might fragment.]

In the table below, record the number of individual blocks that make up each color. These will represent the molecular masses of your group’s three molecules.

[Groups may sometimes predict the reverse order. If they do, you might ask the group to think about evaluating the three molecules in terms of volatility. What does it mean that RED has the lowest boiling point of the three? It suggests that it is the most volatile and thus most likely to partition into the mobile (gas) phase, move through the GC column quickly, and be detected first.]

[Draw a time axis on the board ahead of time or while students are discussing the questions above. It works well if the axis is drawn increasing to the right as is typical for chromatograms.]

Once your group has agreed on an elution order and predicted fragment sizes, bring your intact molecules up to the front of the class and place them in the correct order. If another group has a different elution order than you, discuss your reasoning and come to a consensus.

[At this point all of the RED Duplo molecules should be on stage right, BLUE in the center, and YELLOW on stage left. Each color will have it’s own clear plastic tub. You could discuss the idea that each molecule will have a characteristic “retention” time, but for our purposes here only the order matters.]

[If necessary, this would be a good time to move the class to the space where you’ve taped the time vs. mass axes on the floor and will be fragmenting the molecules. At this point, it is useful to have the students group up according to the color of the molecule they handled in their original group of three (e.g., all those who worked with RED get together; same for BLUE and YELLOW).]

Now let’s look at how each molecule fragments in the mass spectrometer.

[Select one representative for each color to come to the front, pick up their tub and get positioned at the appropriate location on the time axis taped to the floor (Elution order: RED, BLUE, YELLOW). Prompt the class to describe what happens after each color band elutes from the GC column (ionization/fragmentation via EI; a good chance to review how fragmentation happens in EI), then let the representative for the RED group simulate fragmentation by dumping the tub containing all the RED molecules onto the floor from approximately chest height. Have the RED group arrange all of the fragments on the floor in order of mass and perpendicular to the retention time axis. Repeat with BLUE (middle of the time axis) then YELLOW (near the end of the time axis), both from the same approximate height as RED.]

[Note here the importance of the height (a proxy for energy; 70eV for EI) from which the molecules were dropped, both in terms of fragmentation pattern and consistency. You might also ask the students why most GC-MS EI sources are set to 70eV and what will happen if we drop the Duplo molecules from the height of the roof instead (higher energy yields more smaller fragments). Usually the class intuits that fragmentation patterns should be related to the energy of the electron beam in EI, that mass spectra comparison/database matching is only possible if fragmentation patterns are consistent from instrument to instrument, and that higher energies will result in a shift towards smaller fragments.]

[A common misconception among students is that mass spectra reflect the orderly breakdown of the molecular ion into the largest fragment followed by serial fragmentation into increasingly smaller masses. It is worth mentioning that fragmentation patterns are better described in probabilistic terms. Asking students to envision how the Duplo molecules fragmented when dumped on the floor can help them appreciate that some hit the floor first and hardest, while others were “cushioned” or “shielded”; the orientation and timing of each Duplo molecule hitting the floor was different; the actual height from which each was dropped varied slightly due to the starting position of the Duplo molecule in the tub; even the strength of each linkage within two of the same color Duplo molecules is likely to be slightly different. However, each of these differences are layered on top of the inherent defining structural features of each Duplo molecule to determine which fragments dominate.]

[After groups have some ideas and report out, review the difference between a chromatogram (TIC, XIC) and a mass spectrum. Now use the fragment data sheet to fill in the Excel MS tab, which will show a mass spectrum for each colored molecule. Discuss the convention that spectra are often normalized so that the most abundant peak is set to 100, and point out that each total mass spectrum has a RT associated with it. Does each type of molecule contain a characteristic/unique mass? Are any masses common to more than one type of molecule? The plots below (also included as a pptx file) may be useful as a way to connect the Duplo molecule activity to the “look” of real data from a GC-MS.] A total ion chromatogram (TIC) was collected by GC-MS for a standard solution containing a mixture of 20 organochlorine pesticides: 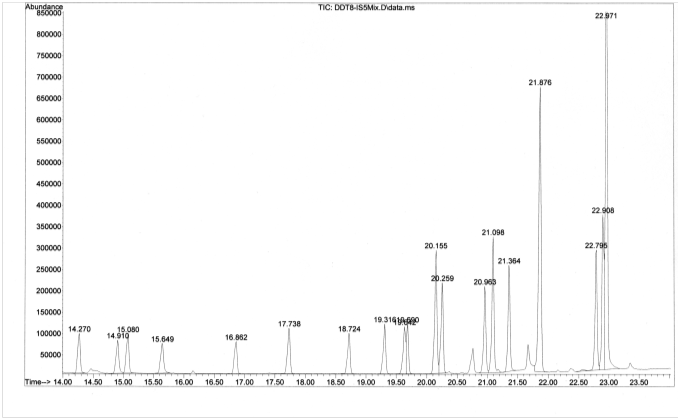 Consider the chromatographic peak at 21.876 min corresponding to the insecticide, DDT.

[Students will often come up with the first two answers if they have recently completed a unit on separations and the factors that influence peak broadening. One approach to having students discover the last answer (multiple overlapping compounds) is to ask them to consider the chromatogram at the base of the peak at 21.876 min. They should notice the small peak that overlaps with the peak of interest. Can they know from the TIC alone that other compounds are not co-eluting with the peak of interest? Once students agree that the answer is no, a nice way to reinforce connections to previous material is to ask them to think of ways to determine if the peak was “pure”. Their answers may include techniques to improve chromatographic resolution or utilize MS data to plot an XIC or evaluate mass spectral consistency through the width of the peak.]

To help confirm the identity of the peak at 21.876 min as DDT, it would be common to compare a mass spectrum (m/z vs. abundance) from the middle portion of the peak to a reference spectrum for DDT, taken under similar ionization conditions. A useful source for reference EI mass spectra is the NIST Chemistry WebBook. [If time allows, the DDT mass spectrum shown above provides a good opportunity to ask students to explain the y-axis label (“Rel. Abundance”), how it differs from other mass spectra y-axis labels (“Abundance”; “Detector Response”), and the nature of the raw signal used to construct this particular mass spectrum. These questions may also be useful as a way to transition into a subsequent discussion about mass analyzers and detectors. Some students might also notice that the molecular ion peak (and others) appear as a groups of peaks, a feature that can be used to talk about characteristic isotope patterns common for halogen-containing compounds.]

[Students sometimes assume that all fragments of DDT-d8 will be 8 units higher. To correct this misunderstanding, ask students to imagine where the deuterium atoms might be located on the DDT structure then predict where the deuterium atoms will be when the structure fragments. Students should recognize that fragments can’t all increase by 8 and some fragments (those without a deuterium label) may not increase in mass at all compared to the unlabeled DDT.]

We often use internal standards to correct for instrument variability and losses during sample processing. Ideally, the internal standard is an isotopically labeled version of the analyte of interest. For example, if you were analyzing a water sample for DDT concentration, you might inject a known amount of DDT-d8 at the time of collection, then prepare your sample (e.g., extract, concentrate, clean up) for injection on the GC-MS.

[Set aside ~25 minutes of class time]

In 2010, the Deep Water Horizon oil spill released 5 million barrels of crude oil into the bottom waters of the Gulf of Mexico. One strategy to minimize surface slicks was to release chemical dispersants (i.e., surfactants) into the water by plane or into the deep water near the wellhead, 5000 feet below the surface. This was the first time that dispersants were released into deep water on a large scale (2.1 million gallons of dispersants), so there was considerable uncertainty about what would happen to the dispersant chemicals over time. The following figure was taken from a paper titled “Fate of Dispersants Associated with the Deepwater Horizon Oil Spill” by Elizabeth Kujawinski et al. (2011). 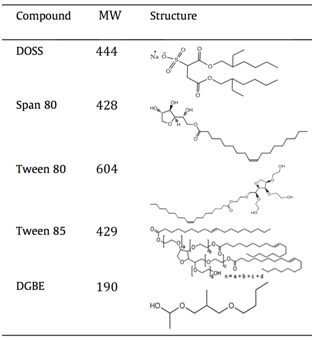 [In the table, DOSS is shown as the sodium salt (MW 444 g/mol). If students are confused about why this produces a molecular ion with m/z 421, ask them to describe what will happen to the sodium salt under ESI(–) conditions. They typically realize that the sodium salt of DOSS will form the [DOSS – H]– molecular ion, and the positive sodium ion (MW 23) will not be observed or attached.]

In fact, the data from Figure S2 were collected using a liquid chromatograph coupled to an ion trap mass spectrometer operated in MS/MS mode. In this mode, the mass spectrometer uses the mass analyzer (an ion trap) to isolate ions of one particular m/z, fragment them, then sort/detect the resulting fragment m/z values. In this way Kujawinski et al. were able to create an MS/MS spectrum (not shown), which plots the m/z values for the fragments of the selected ion. The bottom panel in Figure S2 shows the XIC for two characteristic fragments (m/z 227 and m/z 291) of the molecular ion m/z 421.