While ICP devices do offer certain advantages over flame atomic absorption (AA) spectrophotometers, flame AAs are still widely used for measurement purposes. They are cheaper to purchase and operate than an ICP and, for someone only needing to measure a few specific elements on a regular basis, a flame AA may be the better choice. There are a variety of instrumental design features on AA spectrophotometers that are worth consideration.

One of these concerns the radiation source. Atomic absorption spectrophotometers require a separate source lamp, called a hollow cathode lamp, for each individual element that you wish to measure. An illustration of a hollow cathode lamp is shown in Figure \(\PageIndex{9}\). The hollow cathode is coated with the element you wish to measure. The interior is filled with a relatively low pressure (1 Torr) of an inert gas such as argon or helium. A voltage is applied across the anode and cathode. The filler gas (e.g., argon) is ionized to Ar+ at the anode. The Ar+ ions are drawn toward the cathode and when they strike the surface, sputter off some of the coated atoms into the gas phase. In the sputtering process, some of the atoms are excited and emit the characteristic lines of radiation of the atoms. Hollow cathode lamps cost about $200 a piece, so buying lamps for many elements can get a bit expensive.

Why is the cathode designed with a hollow configuration?

There are two reasons for the hollow cathode design. One is that the configuration helps to focus the light beam allowing a higher intensity of photons to be directed toward the flame or furnace. The second is that it helps prolong the lifetime of the lamp. It is desirable to have sputtered atoms coat back onto the cathode, since it is only those atoms that can be excited by collisions with the Ar+ ions. Over time the number of atoms coated onto the cathode will diminish and the intensity of the lamp will decrease. The lamps also have an optimal current at which they should be operated. The higher the current, the more Ar+ ions strike the cathode. While a higher current will provide a higher intensity, it will also reduce lamp lifetime. (Note: There is another reason not to use high currents that we will explore later after developing some other important concepts about the instrument design). The lifetime of a hollow cathode lamp run at the recommended current is about 500 hours. The need to use a separate line source for each element raises the following question.

Why is it apparently not feasible to use a broadband continuum source with a monochromator when performing atomic absorption spectroscopy?

One thing you might consider is whether continuum lamps have enough power in the part of the electromagnetic spectrum absorbed by elements.

In what part of the electromagnetic spectrum do most atoms absorb (or emit) light?

Recollecting back to the emission of metal salts in flames, or the light given off in firework displays, it turns out that atoms emit, and hence absorb, electromagnetic radiation in the visible and ultraviolet portions of the spectrum.

Do powerful enough continuum sources exist in the ultraviolet and visible region of the spectrum?

Yes. We routinely use continuum sources to measure the ultraviolet/visible spectrum of molecules at low concentrations, so these sources certainly have enough power to measure corresponding concentrations of atomic species.

Another thing to consider is the width of an atomic line. What are two contributions to the broadening of atomic lines? (Hint: We went over both of these earlier in the course).

Using information about the width of an atomic line, explain why a continuum source will not be suitable for measuring atomic absorption.

The information provided above indicates that atomic lines are extremely narrow. If we examine the effective bandwidth of a common continuum ultraviolet/visible source/monochromator system, it will be a wavelength packet on the order of 1 nm wide. Figure \(\PageIndex{10}\) superimposes the atomic absorption line onto the overall output from a continuum source. What should be apparent is that the reduction in power due to the atomic absorbance is only a small fraction of the overall radiation emitted by the continuum source. In fact, it is such a small portion that it is essentially non-detectable and lost in the noise of the system. 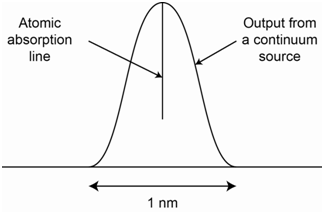 What is the problem with reducing the slit width of the monochromator to get a narrower line?

The problem with reducing the slit width is that it reduces the number of photons or source power reaching the sample. Reducing the slit width on a continuum source to a level that would provide a narrow enough line to respond to atomic absorption would reduce the power so that it would not be much above the noise. Therefore, hollow cathode lamps, which emit intense narrow lines of radiation specific to the element being analyzed, are needed for atomic absorption measurements.

With this understanding we can ask why the hollow cathode lamp has a low pressure of argon filler gas.

The pressure of the argon is low to minimize collisions of argon atoms with sputtered atoms. Collisions of excited state sputtered atoms with argon atoms will lead to broadening of the output of the hollow cathode lamp and potentially lead to the same problem described above with the use of a continuum source. A low pressure of argon in the lamp insures that the line width from the hollow cathode lamp is less than the line width of the absorbing species.