Fluorescence only occurs after a chemical species has first been excited by electromagnetic radiation. The emission of radiation by a solid object heated in a flame (e.g., a piece of iron) is not fluorescence because the excitation has occurred thermally rather than through the absorption of electromagnetic radiation. Fluorescence can occur from species that have been excited by UV/VIS radiation. To consider what happens in the process of fluorescence, we need to think of the possible energy states for a ground and excited state system.

Draw an energy level diagram for a typical organic compound with \(\pi\) and \(\pi\) * orbitals. Now consider the electron spin possibilities for the ground and excited state. Are there different possible ways to orient the spins (if so, these represent different spin states). 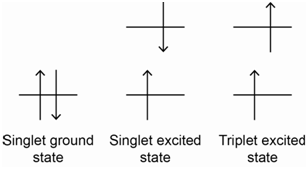 Since they are different from each other (i.e., spins parallel versus spins paired), it makes sense that they would have different energies.

Which one do you expect to be lower in energy?

If the spin state is defined as (2S + 1) where S represents the total electronic spin for the system, try to come up with names for the ground and possible excited states for the system that are based on their spin state.

In the case of the excited state in which the electrons have paired spins (+½ and –½), the value of S is also zero. Therefore, the spin state, which is 2S + 1, would have a value of 1.

Draw a diagram of the energy levels for such a molecule. Draw arrows for the possible transitions that could occur for the molecule. 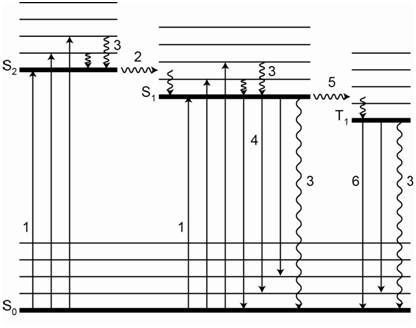 Note in Figure \(\PageIndex{4}\) how a triplet state is slightly lower in energy than the corresponding singlet state. Note as well that there are vibrational and rotational levels superimposed within the electronic states as we observed before when considering UV/VIS spectroscopy. The energy level diagram in Figure \(\PageIndex{4}\) shows the transitions that can occur within this manifold of energy states for an organic molecule. The transitions are numbered to facilitate our discussion of them.

It is reasonable at first to think that there is an absorption transition that goes directly from the S0 to the T1 state. This is a transition that involves a spin-flip and it turns out that transitions that involve a spin-flip or change in spin state are forbidden, meaning that they do not happen (although, as we will soon see, sometimes transitions that are forbidden do happen). What is important here is that you will not get direct excitation from the S0 level to a higher energy triplet state. These transitions are truly forbidden and do not happen.

The transitions labeled with the number (3) in Figure \(\PageIndex{4}\) are known as radiationless decay or external conversion. These generally correspond to the loss of energy as heat to surrounding solvent or other solute molecules.

The lifetime of an electron in an S2 state is typically on the order of 10-15 second.

The transition labeled (4) in Figure \(\PageIndex{4}\) denotes the loss of energy from S1 as radiation. This process is known as fluorescence.

Therefore, molecular fluorescence is a term used to describe a singlet-to-singlet transition in a system where the chemical species was first excited by absorption of electromagnetic radiation. Note that the diagram in Figure \(\PageIndex{4}\) does not show molecular fluorescence occurring from the S2 level. Fluorescence from the S2 state is extremely rare in molecules and there are only a few known systems where it occurs. Instead, what happens is that most molecules excited to energy states higher than S1 quickly (10-15 second) undergo an internal conversion to a high energy vibrational state of S1. They then rapidly lose the extra vibrational energy as heat and “pause” in the S1 state. From S1, they can either undergo fluorescence or undergo another internal conversion to a high energy vibrational state of S0 and then lose the energy as heat. The extent to which fluorescence or loss of heat occurs from S1 depends on particular features of the molecule and solution that we will discuss in more detail later in this unit.

So how do fluorescent light bulbs work? Inside the tube that makes up the bulb is a gas comprised of argon and a small amount of mercury. An electrical current that flows through the gas excites the mercury atoms causing them to emit light. This light is not fluorescence because the gaseous species was excited by an electrical current rather than radiation. The light emitted by the mercury strikes the white powdery coating on the inside of the glass tube and excites it. This coating then emits light. Since the coating was excited by light and emits light, it is a fluorescence emission.

The transition labeled (5) in Figure \(\PageIndex{4}\) is referred to as intersystem crossing. Intersystem crossing involves a spin-flip of the excited state electron. Remember that the electron has “paused” in S1 for about 10-8 second. While there, it is possible for the species to interact with things in the matrix (e.g. collide with a solvent molecule) that can cause the electron in the ground and/or excited state to flip its spin. If the spin flip occurs, the molecule is now in a vibrationally excited level of T1 and it rapidly loses the extra vibrational energy as heat to drop down to the T1 electronic level.

What do you expect for the lifetime of an electron in the T1 state?

Earlier we had mentioned that transitions that involve a change in spin state are forbidden. Theoretically that means that an electron in the T1 state ought to be trapped there, because the only place for it to go on losing energy is to the S0 state. The effect of this is that electrons in the T1 state have a long lifetime, which can be on the order of 10-4 to 100 seconds.

There are two possible routes for an electron in the T1 state. One is that another spin flip can occur for one of the two electrons causing the spins to be paired. If this happens, the system is now in a high-energy vibrational state of S0 and the extra energy is lost rapidly as radiationless decay (transition 3) or heat to the surroundings.

The other possibility that can occur for a system in T1 is to emit a photon of radiation. Although, theoretically a forbidden process, it does happen for some molecules. This emission, which is labeled (6) in Figure \(\PageIndex{4}\), is known as phosphorescence. There are two common occasions where you have likely seen phosphorescence emission. One is from glow-in-the-dark stickers. The other is if you have ever turned off your television in a dark room and observed that the screen has a glow that takes a few seconds to die down. Phosphorescence is usually a weak emission from most substances.

Why is phosphorescence emission weak in most substances?

A second reason why phosphorescence is often weak has to do with the long lifetime of the T1 state. The longer the species is in the excited state, the more collisions it has with surrounding molecules. Collisions tend to promote the loss of excess energy as radiationless decay. Such collisions are said to quench fluorescence or phosphorescence. Observable levels of phosphorescent emission will require that collisions in the sample be reduced to a minimum. Hence, phosphorescence is usually measured on solid substances. Glow-in-the-dark stickers are a solid material. Chemical substances dissolved in solution are usually cooled to the point that the sample is frozen into a solid glass to reduce collisions before recording the phosphorescence spectrum. This requires a solvent that freezes to a clear glass, something that can be difficult to achieve with water as it tends to expand and crack when frozen.

Now that we understand the transitions that can occur in a system to produce fluorescence and phosphorescence occurs, we can examine the instrumental setup of a fluorescence spectrophotometer.