Heat dissipation during physical activities, like exercise, is a critical part of thermoregulation. Humans have a basal (at rest)metabolic rate of about 0.63 W/kg, or roughly 50 W for the average person, where a watt (W) is one Joule per second. But exercising just certain groups of muscles may metabolize 0.090 g (0.5 mmol) of glucose per minute, producing 24 W of mechanical energy. Since muscle energy conversion is only 22-26% efficient, about 76 W of heat energy is produced at the same time.[1].

If this metabolic waste heat energy can't be dissipated, heat stroke or other consequences may result. Humans use perspiration from the skin as one means of thermoregulation, because it has a cooling effect due to the latent heat of evaporation of water. Animals with few sweat glands, like dogs, pant to achieve evaporative cooling through the tongue and mouth. Few other animals depend on sweating to cool down.

High humidity can reduce the rate at which the body can lose heat by evaporation. Light clothing that wicks sweat away but reflects radiant heat from the sun aids thermoregulation. plastic raincoats can actually contribute to heat stress. [3]

The volume of water lost in perspiration depends on exercise level, and ranges from 100 to 8,000 mL/day. [4]. Mild dehydration (at about 1% body mass loss) may impair cognition[5]. It's not hard to lose that much; a body mass loss of 3 to 5% can result from cycling without hydration (water intake) for 2 hours in Summer(35 °C). Other effects include loss of blood volume by 3 to 6%, increasing body temperature, higher heart rates, and poor blood circulation. These effects are easily eliminated by replacing 50 to 80% of the fluid lost in sweat[6]

When perspiration is evaporated, a large amount of heat is absorbed even though the temperature remains constant at about skin temperature. The heat that is absorbed when perspiration evaporates (by breaking bonds between water molecules, thereby increasing its potential energy) is called the latent heat of vaporization. The kinetic energy of the water molecules (rotation, vibration, and limited translation) remains constant during phase changes, because the temperature does not change.

The heat of vaporization is usually recorded at the boiling point, but the heat absorbed by evaporating perspiration is similar, as suggested by the values in the table below.

How much perspiration must be evaporated if it is the only means of dissipating the 75 W of heat energy mentioned in the introduction, over a period of 30 minutes? Assume the heat of vaporization is about 43 kJ/mol at body temperature, and that no other heat loss (radiation and convection from the skin, etc.) is involved.

This seems like a lot of energy! But how much perspiration would be evaporated?

Protective gear worn by fire fighters, welders, and especially bomb disposal technicians may prevent evaporation of perspiration. The bomb suits worn to protect against Improvised Explosive Devices (IEDs) use an ice-based chiller unit and recirculating water to aid thermoregulation.[8] Only a small amount of ice is necessary, because it takes a large heat of fusion to melt ice, even though the temperature remains at 0 °C while the heat is absorbed. 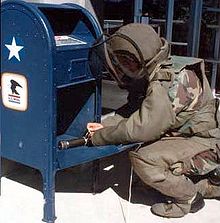 The heat energy which a solid absorbs when it melts is called the enthalpy of fusion or heat of fusion and is usually quoted on a molar basis. (The word fusion means the same thing as “melting.”) When 1 mol of ice, for example, is melted, we find from experiment that 6.01 kJ are needed. The molar enthalpy of fusion of ice is thus +6.01 kJ mol–1, and we can write

To remove the same amount of heat (135 kJ produced in 30 minutes) as the evaporation of 2 oz of perspiration, how much ice would be required?

(less than a pound) of ice.