Water, covering three-fourths of the Earth’s surface, is one of the most abundant resources on our planet. Approximately 97% of the water on Earth is salt water found in the oceans. The remaining 3% is fresh water that supplies most human and animal needs. Almost 70% of the fresh water is frozen in glaciers, permanent snow and ice, and permafrost. About 30% of fresh water is underground, much of it contained in deep aquifers that are extremely hard to reach. This leaves lakes and rivers to contain just a little more than 0.25% of all fresh water. (El-Ghonemy, 2012) This essential resource is becoming scarce in many parts of the world. Almost one-fifth of the world’s population, or around 1.2 billion people, lives in areas of water scarcity. Almost one-quarter of the world’s population, 1.6 billion people, face economic water shortage. This means they do not have the necessary infrastructure to take water from rivers and aquifers. Water use has been growing more than twice as fast as the population in the last century. Even though there is enough fresh water on the planet for six billion people, it is distributed unevenly and much of it is wasted, polluted, and unsustainably managed. (United Nations Department of Economic and Social Affairs (UNDESA), 2012) 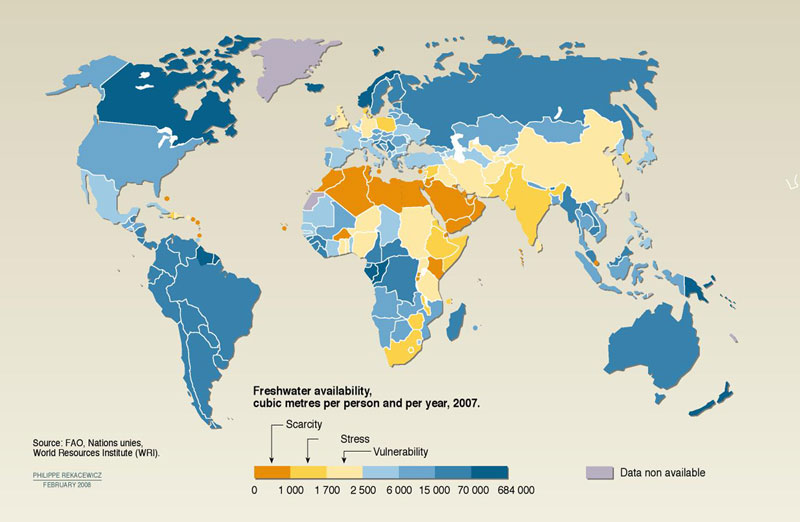 Even though our fresh water supplies are limited, the oceans provide us with a nearly inexhaustible source of water. The major drawback, however, is their high salinity. A permissible limit of salinity in water is 500 parts per million (ppm). Seawater normally has salt concentrations from 35,000 to 45,000 ppm. If this water could be desalinated, or have the salt removed, it could help tackle the fresh water shortage that many countries are facing (El-Ghonemy, 2012).

There are many techniques for water desalination, but they can all be classified under two categories: thermal and membrane processes. The thermal processes use energy sources such as fossil fuels or nuclear energy. Reverse osmosis, a membrane process, uses electricity to generate high pressures. It can be better for the environment than thermal processes because solar energy and wind energy can be used to generate the power needed for the pumps involved in this process (El-Ghonemy, 2012). Distillation is a commonly used method for purifying solvents and separating mixtures. This technique separates substances based on their differences in boiling points (Wake Forest University). Because water boils at a lower temperature than salt, distillation is a technique that can be used for desalination in order to increase our fresh water supply.

Membrane distillation (MD) is a separation process in which a hot feed water stream is passed over a semi-permeable hydrophobic membrane. The temperature difference between the two sides of the membrane causes a difference in vapor pressures. This causes water from the hot side to evaporate and pass through the pores to the cold side. The vapor is then condensed into pure water. MD does not require a high pressure feed like reverse osmosis. It can process very high salinity brines (salt water solutions) and can be performed on a large or small scale. It can be used in many ways depending on how liquid is collected. One basic type is called direct contact MD (DCMD). In this method the vapor is condensed on a pure water stream that directly contacts the other side of the membrane. Salt water flows in, the membrane traps the salt and other solutes, and fresh water flows out. (Edward K. Summers, 2012)

In addition to desalination, membrane distillation can be used to remove trace amounts of volatile organic compounds (VOCs) from waste water. This gives people a chance to reuse water instead of wasting so much of it.

Some advantages to using MD are as follows (Khayet):

Some disadvantages of MD include (Khayet):

Since membrane distillation is more energy efficient than other types of desalination, it is seen as an environmentally friendly alternative and could help with the fresh water scarcity problem that the world is facing.